From what I've owned,

I own a PC, so I don't think playing Series S/X will change my opinion of them. PS5 also has potential to be F tier. That depends on whether or not Sony will release all PS5 exclusives to PC or not. I buy consoles based on whether or not I need them to play games on the hardware they were intended for. If Sony and MS put all their games on PC, then there's no need for me to buy their consoles, which puts them in F tier. I do feel like there should be an additional tier below F though. Something like E tier. That would be reserved for consoles that absolutely bombed, like Jaguar, or 3DO. Now, someone might ask why I just don't move everything else up a tier? After all, that would make room for Jaguar and 3DO at the bottom right? Well then, I'd have to move NES, Switch, and PS4 up to S tier to make room. But I don't believe those consoles are the best of the best. At least not yet. And then I'd have to take everything from B tier and move it up to A tier to make room too. Et Cetera.

Yeah, I think Wii U used to be C tier (and even that is pushing it). I could see somebody ranking Wii U as D tier back in its heyday. That would be a very rational ranking for Wii U.

S: Launch model PS3s offered everything the PS2 did, with the addition of bluray, so games didn't have to be on multiple discs.  Up to a maximum of 7-player local games, thanks to Bluetooth. Re-chargeable controllers, HD games, a full media center, with music, photos, and video.  Linux OS, though it was removed.  It also defined story-based games so much so that it made me like the PS4 less because of all the missing features and massive amounts of re-releases.  It's much more than just a game console and expanded on everything the OG Xbox introduced while giving us free online.  There was even a rediculous amount of flash sales in the PS Store, and if you took advantage of it, every week you could have gotten multiple triple A games for just $4.99, back in 2012-2014.

A: First Nintendo console.  Expectations were low.  Exceeded.  PS4 expectations were high, and I was extremely disappointed with the PS4 so much that it made me into a PC gamer.  Never owned an Xbox, but it did introduce hard drives to consoles, and music/etc.

B: An okay console, but the dreamcast's D-pad was like a plastic saw grinding against your thumb.  It also removed the Z and C buttons that were on the genesis and saturn.

C: Saturn was more capable than the PS1, with potential left on the table.  Especially true for 2D games.  Most developers didn't even figure out how to do transparency on the Saturn.  These days, the 3D graphics on the PS1 and Saturn have aged so poorly, the only thing that looks good today are the 2D sprite games, which the Saturn does better.  360 is here because of RROD.  I'd seen it happen on 7 different occasions.  None of them were mine, though, I was content with the PS3.

Although I've never owned an SNES can't really say which is better between it and Genesis.  I'd rather play Sonic 3 & Knuckles over anything the SNES has to offer.  It's also the best way to play the game, considering Michael Jackson's crew isn't allowing the game to be re-released - not that an emulated version would be any good anyway, looking at the history.

Don't really have much play time on Nintendo consoles to be able to list them.  The switch is literally the first Nintendo console I'd ever liked, so there's that.  Wii U was close, but not quite there. 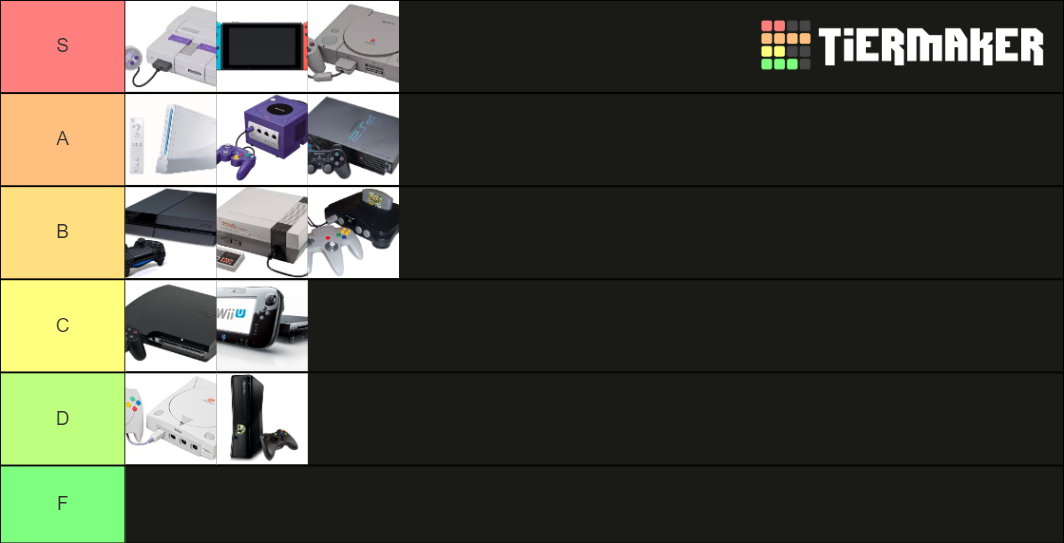 This was surprisingly hard to make apart from the S tier which came quite easily. I only placed consoles I owned at some point and didn't place any in the F tier since I don't think any of them were bad.

S- SNES and PS1 have many of my favorite games ever. Switch also has some of my new favorites and also allowed me to return to old classics (FF games, Mega Man games, Castlevanias, 3D Marios and many more)

A - Solid consoles with many great games

D - A few select titles I enjoyed, didn't spend much time with them