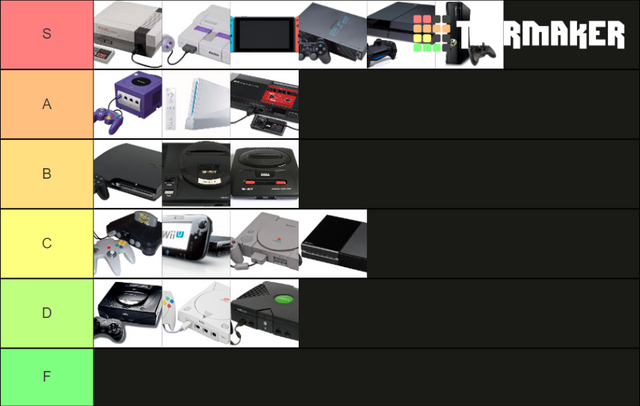 I found one that included handhelds because I didn't want to leave those out. Here we are:

GameCube - Favorite of all-time. Incredible exclusives and you gotta love that startup screen and the controller.

Switch - I'm only ranking this based on its merits so far, if it keeps up the pace of excellent games I just might put it in the same league as the GameCube when all is said and done.

PS3 - A messed up launch but I didn't get it till way later. Tons of great games and my most played PS console.

PS4 - Again didn't get it till way after launch because in terms of exclusives it didn't have much to offer at first. But they definitely made up for that later on and then some.

Wii - The first 4 years it kept up the great pace of the GameCube and while it slowed down later on it still managed to have several amazing titles in its life.

PS2 - I actually never owned a PS2 but I've encountered and enjoyed tons of games that originated on it as remasters or ports (MGS 2 and 3, FFX, Okami, Tales of the Abyss etc. etc.)

SNES - While I actually don't think it had any games that were straight up amazing, the shear number of great ones is staggering.

GBA - Golden Sun, Pokémon Ruby and FireRed, Metroid Fusion and a whole lot of SNES ports. That's pretty much it, but its enough.

PS1 - It doesn't have quite the same bulk of titles as the PS2, but it makes up for it with some exceptional games like FF7, Symphony of the Night and so on.

3DS - A few excellent games on it's own and ofc the remakes of OoT and MM made this a console I was very happy to own even if I never bought that many games for it.

N64 - Did someone say OoT and MM? There are of course a few other great titles, but they're definitely the defining games of this console to me.

DS - Honestly the most important DS title to me is Nine Hours, Nine Persons, Nine Doors which was fantastic. Also some good Pokémon games.

Wii U - A lot of bad decisions, but it still had a few really good exclusives in its short life.

GameBoy (Color) - Pokémon Crystal carries this console for me. I had a few other games I enjoyed, but none on the same level.

NES - Its certainly before my time, but I've played several NES games regardless. And... I've yet to encounter one that I find great. SMB3 is the closest thing and I do like that, but I don't like it that much, compared to many SNES games for example.

Well that took longer than I planned but oh well.

It's missing handhelds, so I'll post a table instead.

Personal relationship with each

Here's mine. Included only the systems I played, so this excludes the PlayStation 2 (yes), the SEGAs Saturn and Master System and the XBoxes 360 and One. I also post-processed in the Atari 2600 and the Magnavox Odyssey2/Videopac G7000, two other systems I've played but weren't selectable on the tier list maker. Shame on them, especially for excluding the 2600; one of the most important and dominant systems ever released. Also it's weird you could pick both the Model 1 Mega Drive/Genesis and Model 2 and the Switch picture is ugly. But anyway, here it is;

On S-tier the N64 is the greatest thing known to man; too many ultimate classics on there.

Shortly below it on A-tier are the almost equally great PS1 and Dreamcast, systems with many great games and all-time favourites.

On B-tier are PS3, SNES, Switch and the NES; all great systems with solid experiences but less that became my most highly treasured games like the systems above these.

C-tier are Wii, XBox and the Atari 2600; systems with cool experiences but they've had flaws and only a few games grew to be my favourite games.

On D-tier are GameCube, SEGA Mega Drive/Genesis and PS4. GameCube was a let down to me when all its major games were worse than their N64 predecessors, but Mega Drive would've probably be higher if I actually played it more back in the day and PS4 doesn't really have that much that interested me.

Lastly on F-tier there's WiiU and the Odyssey2/G7000. The latter has it's place for me personally but while it was popular in my country (being branded as a Philips product) it really is a poor-man's version of the 2600. The WiiU has little redeeming qualities, and basically no real classic to speak of, besides Breath of the Wild but sadly for WiiU that's identified more with Switch instead.