Forums - Politics Discussion - What's your definition of a political moderate?

I've been thinking about embracing the term 'moderate' as a descriptor for a while now. Here's the deal: For as long as I've had political opinions, I've always thought of myself as left wing. Strongly left, in fact. Although I have learned and grown over the years, this much hasn't changed. Until recent years. It's not that I've moved a lot, it's that it's very clear that the left does not wish to be associated with me anymore. Things I consider secondary differences of opinion with the mainstream progressive movement have now been rendered dividing-line matters that merit dissociation with me. I'm banned from the Revolutionary Left forums, banned from the Democratic Underground forums, banned from Pride, the main subreddit I visit have been banned and you'll never guess who the instigators of that were. It does make one question whether or not these are the right people to call allies. It increasingly feels like maybe the progressive movement is changing in a way that excludes me by definition and maybe I should accordingly think about embracing a different term formally.

I do worry a tiny bit though that calling myself a moderate from here on, like on the social medias and such, may be misleading in that I think many people's definition of a moderate is like a neoliberal or just somebody who basically favors the status quo and that ain't me. No, I am not undergoing a "red-pilling" or anything of that nature. I've not had some revelation that's changed my fundamental worldview in substance and I kinda think that these terms the left and right have like "red pilled" and "woke" are rather arrogant and pretentious in fact in that everybody seems to assume that they're the only ones 'awake' and everybody else is apparently just too oblivious and dumb to understand their deeper truths or whatever. Most of the views I hold still feel like left-leaning ones to me. But I hold a few opinions strongly that are most often classified as right-leaning (whether that's really fair or not) and I'm frustrated though with how every difference of opinion, particularly on social issues, is treated as a dividing line that requires the severance of ties. That's why I'm thinking moderate might be the right term by which to describe myself henceforth. But like I said, I'd also prefer that people not feel misled like on the social medias and such by my use of that descriptor.

So what do you think? When you hear the term "moderate" do you hear "unprincipled person who stands for nothing" or more like "somebody who's combination of views doesn't fit neatly into a progressive/conservative categorization"?

Someone who is fiscally conservative and socially liberal.

Someone who is fiscally liberal and socially conservative.

Someone who sees both sides of the major issues and doesn't get hot and bothered by either perspective and can even empathize with those people.

I always thought being moderate was having conservative and liberal leanings. At least that's how I've always viewed myself.

The existence of a moderate is tied to the existence of extremists. A moderate is simply not an extremist. That makes them stick out in the US for example because their (right wing) politics are mostly extremist and anyone coming forth with non-bigoted ideas or god beware, a compromise, will be labeled a moderate.

A moderate is simply a good politician who is doing his work as he should, i.e. the vast majority of politicians in countries other than the US. Where I live, there isn't really a word for them because of the mostly absence of extremists. A moderate here is simply the default position for any politician.

Really if you are a moderate in the US there is a possibility you are more likely to think in a logically and more considerate way but i understand why some angerfueled people that go way extreme to both sides might consider you a problem.

It's interesting to see how different people around the world define certain things in politics. The difference between here (Sweden) and my home country (Norway) is quite big, despite us being culturally similar and neighbors. Norway tends more towards liberal values and nationalism with a clear national romantic tinge, whereas Sweden has taken a turn towards a large divide between a heavily authoritarian left and a proper "yeehaw!" right. Centrists and even moderates are considered cowards here, people who have little right to have opinions or be heard. The most amusing thing is that both the farthest left and farthest right have one thing in common; blatant nationalistic notions and attitude, but from two different angles. One is that the nation is an intellectual and humanitarian superpower whose moral superiority and insights give them the right to lecture others, the other is a classic "many problems - one great big solution" Ethno-nationalistic approach with a little "no understanding that a society which is run only by and for-profits might take a toll on certain groups in the population" sprinkled on top.

As for the US, it always puzzled me how the people calling for strict gun control and increased taxation are labeled as "liberals". Increased taxation, calls for government intervention and regulation, and a wish for more judicial and legal mandate to control the population in certain aspects; classic liberalism? Topsy-turvy land to me.

Sometimes, I really like my country's national motto, it's a simple one from before WWII, and its usefulness was even greater directly after the war. "Do your duty - claim your rights." It was originally a working-class slogan but became one of the pillars of the modern industrially advanced welfare state with a fairly balanced hybrid economy as its engine.

As for myself, I define myself to be slightly to left of center, with a motion towards liberalism rather than authoritarian. It's hard to find people with the same overall tendencies here, most people I meet have some pretty extreme opinions and populism is rampant here, both on the right and left-wing. Back home things are a bit better but they're slowly sliding onto the same muddy path, at the same pace as they are becoming less provincial and more centralized and continental in their ways.

I think the definition of moderate is someone who is not at either extreme, but sits more closely to the center of things. They can still be left-leaning or right-leaning.
However you want to define it, the problem at the moment is that the extreme left have made everything an "us or them" scenario. Either you are extreme left or you are far right/nazi and there's nothing in between for them. They even eat their fellow leftists alive, if they are too moderate in their views. Purity tests apply.

Lol i did the political compass thingy,do not know if it is even close to accurate. 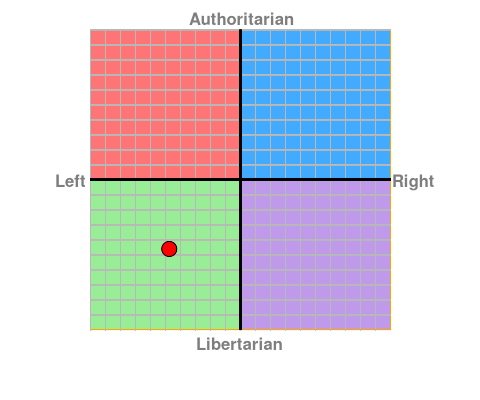 For the more extreme i might be considered fairly moderate i guess.

Which, due to how slanted to the right US politics are, would be considered a leftist over there.