90.  Pirates of the Caribbean: Battle for Buccaneer Gold (Disney Quest Arcade) - This game is truly incredible.  You are literally standing on a 5-person pirate ship, with one person steering and the other 4 working the cannons.  It would probably be higher on my list, but I've only been to Disney Quest once, and now it is closed down.  I hope somehow people get a chance to experience this unique game again.
89.  H.E.R.O. (Atari 2600) - This game came out during the video game crash, so most people never played it.  To me it was Activision's best game that they put on system.  At the time I was impressed at how many unique boards that they put into the game, and it's just a ton of fun to play.
88.  Wii Sports Resort (Wii) - I thought Wii Sports was fun, but this game brought it to a whole new level.  Sword fighting and archery were my favorites, and I still want to see a proper action adventure game with this kind of motion controls (i.e. like Hyrule Warriors with Wii Sports sword and bow controls).
87.  Donkey Kong Jr.  (Arcade) - When I first started going to the arcade this was my favorite game.  I loved climbing on the vines, and I thought it was cool that Mario was the villain.
86.  The Secret of Monkey Island (PC) - This is probably my favorite adventure game.  The characters, story, and comedy in this game are all just fantastic.


85.  Super Mario Bros.  (NES) - The most important video game ever made is still incredibly fun.  There would be no video games any more without this game.
84.  Excitebots (Wii) - Trick racing + motion controls = yes please!
83.  Kingdom Rush (Mobile) - I love tower defense games, and this is definitely one of the best.  I normally don't like mobile, but this is one of two games in my top 100 that I am willing to use a mobile device for, just to play it.
82.  Mega Man 2 (NES) - What can I say about this game that hasn't already been said?  It is Mega Man perfection.  I really liked the first Mega Man when it first came out, but I could tell this game really kicked it up a notch.
81.  Dragon Quest 8 (PS2) - This is my favorite Dragon Quest.  It's so good that it makes me want to go out and play all of the other ones that I've missed.  Few RPGs are this good.


80.  Actraiser (SNES) - This is a strategy game + a beat em up platformer.  This combo should not work at all and yet it does.  For some reason Actraiser 2 got rid of the strategy part.  Huge mistake.  This game is a one of a kind gem.
79.  South Park: The Stick of Truth (PS3) - Has all the hilarity of a Lucas Arts adventure game, but with RPG mechanics (which I prefer).  Pure enjoyment from beginning to end.
78.  Super Stardust HD (PS3) - A modern arcade shmup.  There needs to be more games like this.
77.  Q-Bert (Arcade/Atari 2600) - Easy to learn.  Tough as nails to master.  This is the very definition of a great game.
76.  Punch Out (Arcade) - I love Punch Out in all of its various forms.  This is the first version of Punch Out that I ever played and it took more than it's fair share of my quarters.


75.  1943 (Arcade) - I didn't take this game seriously until a couple of year ago.  I thought it was basically just like 1942.  Nope, it's like 1942 on steroids, lots and lots of steroids.
74.  Fire Emblem: Path of Radiance (Gamecube) - This is the best Fire Emblem game and the only Gamecube game to make my list.
73.  Dungeon Keeper 2 (PC) - The best form of a "be the villain" game.  I would love to see a modern remake for this on the PC or console.
72.  Rogue Legacy (PS3) - I love platformers and beat 'em ups and RPGs and games that are really tough.  This roguelike is all of that thrown into one.
71.  Super Smash Bros for Wii U (Wii U) - This is the best version of Smash Bros so far, just because it has the biggest roster.  I expect the Switch version to be taking this one's place next year.

#50 - A game about an animal time-travelling to get loads of different types of jewels.
#49 - Though released on a somewhat forgotten console (if it can even be called a "console"), it was the predecessor to this franchise's most important and successful game, which was released on a far more popular system.
#48 - An indie game which got loads of free new content via updates, which are finally set to end early next year.
#47 - A forgotten racing franchise spin-off which regularly makes my yearly list, and probably mine only.
#46 - Its main theme (the title screen music, that is) was just referenced in a very recently released movie trailer.

Edit: also, you definitely know at least one more. 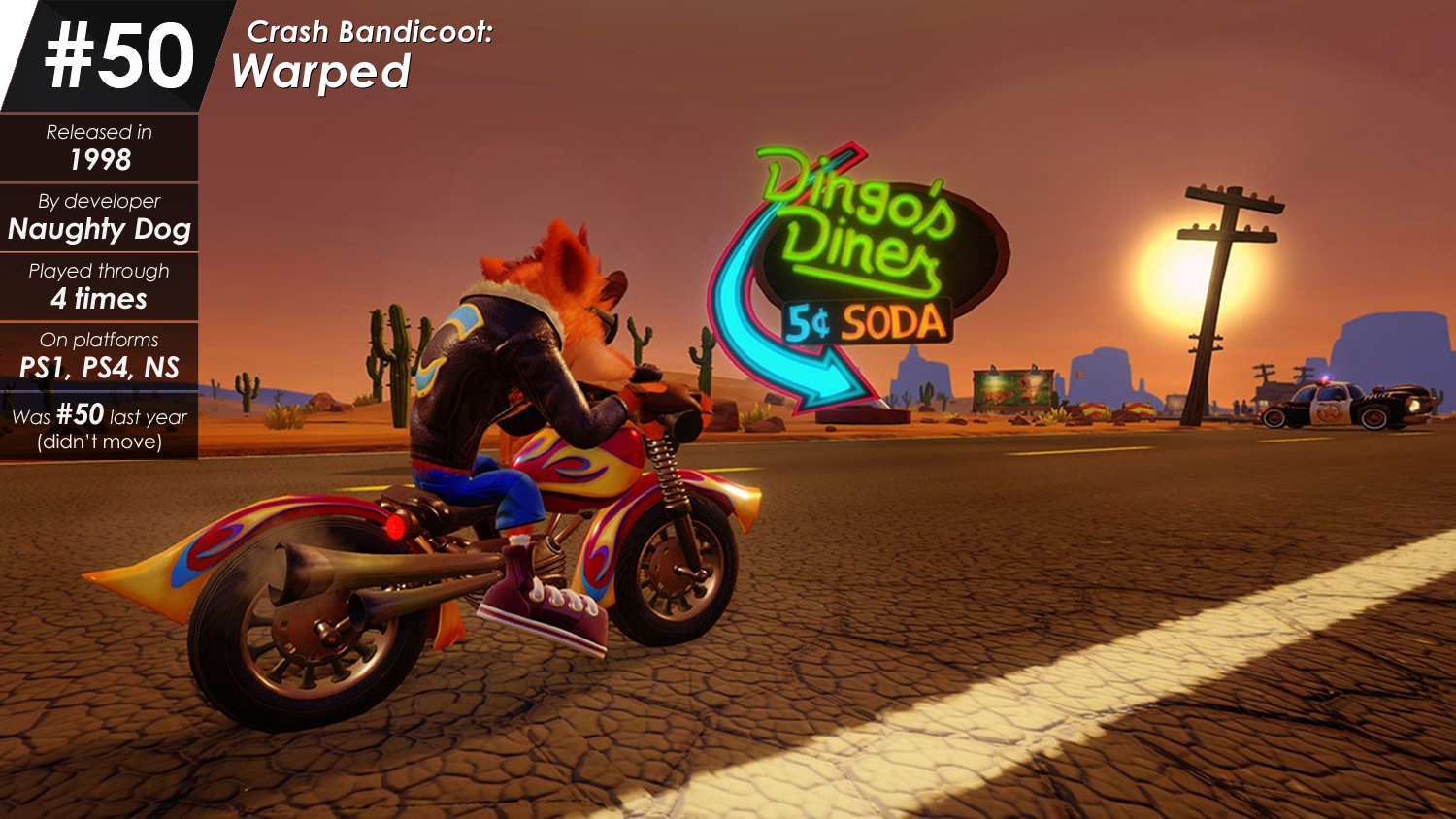 This is probably one of the first games I've beat in my life, and I've many good memories of it. As a child, everything here was awesome - all the time-travelling sci-fi stuff along with all the different kinds of settings, both classic and futuristic, it was all just really cool. Of course, it was much better than the other games in the trilogy because it had more than just the same old boring platforming levels, right..? Well, having replayed the game twice on the N. Sane Trilogy (once on a friend's PS4 and more recently on my own Switch), I gotta say it doesn't quite hold up the same way. The platforming levels are great, especially the sphynx ones, but the gimmicky skiing, racing and especially dogfighting levels got annoying quite fast. Warped will always hold a place in my heart, but I definitely don't think as highly of it nowadays. Oh well.

My list heavily leans into the platformer and RPG genre. I I wanted to spread out a bit but those other genres are just not as good

Anyway here is a hint for tomorrow's game.

#49 Its a game from a franchise that only has one official release in America. The main character is a trophy that assists in Smash Bros Wii U. 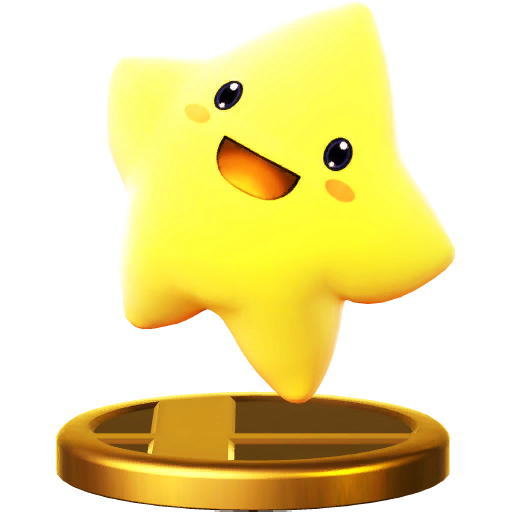 Yes! But I know him by his original name of Stafy, not Starfy

None of my games guessed so far, so I should add a hint before going to sleep.

#50
a) Turn-based or real-time? I can't decide in this newest entry in the series.
b) This europa is a bit different than europe.

#49
a) Six degrees of freedom!
b) Robotic helpers gone crazy and taking over.