Some years ago, I was a huge fan of RPGs. I love games like Final Fantasy IV, Chrono Trigger, Final Fantasy VII, Breath of Fire 2, etc. But in the last 3 or 4 years, I haven't played a single game of this genre (Except South Park: The Stick of Truth, but mainly because of the humour).

I've tried games like Final Fantasy X (Didn't liked it) and Final Fantasy XII (Good gameplay, but didn't went very far). I don't know why, but I've got tired of RPGs. Until last week, when I started Xenoblade Chronicles.

My save has something around 8 hours. I'm up to Colony 6, with some sidequests cleared in the way. I'm in love with everything in this game. The plot looks great so far, the soundtrack is beautiful, and characters like Shulk and Dunban are awesome. Also I really like how the game lets you explore the vast world while you get experience from it. 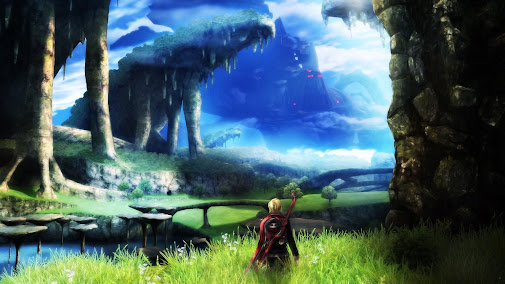 The battles are very fast and breathtaking, even when you are fighting a regular enemy in the field. Of course, the boss battles are way more exciting though. I've had a bit of trouble learning some of the battle and system mechanics, but overall, it's nothing very hard.

I'm really glad that I found some time and motivation to start Xenoblade Chronicles. It's not only one an awesome RPG, but it's also one of the best games I've played in the last years.

You think the plot is great? Right now, it's just a story about revenge. Just wait till the last segment of the game and you'll see what is a great plot.

Yeah, Im not big into JRPGs at all, but this game is awesome. Would also recommend Ni No Kuni if you haven't played it

Congratulations to your great choice. From the attached game I guess you play the right variant of the game, the one for Wii. Good decision. I think you will have a lot of fun.

Xenoblade chronicles is awesome, definitely among the best jrpgs out there... I would not say the same thing about ni no kuni... Pretty much the opposite...

That's cool! I had the same experience as you really, I was obsessed with RPGs until FFX started to lose me... Still enjoy the occasional western RPGs but haven't gotten back into the jrpg thing yet.

I too haven't played that game and was waiting till I got a New 3ds to play it there, so I hope I have the same experience. It's always great when you find a game that immerses you like that! :)

Yup. Its a realy good game.

Hey, we're at the same point in the game!

I'm really enjoying myself too. I thought it was a bit overwhelming at first with all of the tutorial text but now that I'm past that, it's so much fun to just go in and explore and battle enemies. Really looking forward to playing more of it (and hopefully beating it before XCX comes out).

At your current location in the game, you still don´t know NOTHING about the plot.

Xenoblade has a lot of great stuff going for it, but I will never understand why people say the plot is great...
I'm assuming the plot isn't what you disliked about FFX?