Forums - Politics Discussion - Would you date someone from the opposite side of the political spectrum?

There are many examples on the left field of all those issues as there are on the right field. Being biggoted, evil, mean, etc, are independent of political inclination. I know very good human beings from far left thinking to far right, same for bad/ill people.

That is why I said my opposite political side wouldn`t attract me, because that would mean someone that want a dictatorship with very few liberties.

For me the government should only take care of national sovereign, judicial system, basic infraestructure and police with minimal cost to population. And sure I can make room for some social programs to prevent starvation, health calamities and basic education. But I`m totally against unecessary law. Government shouldn`t dictate who can marry and how many times, that is for adults in relationship to decide themselves. Sure if there are cases of abuse, like someone forcing, coercing or purchasing partners by all means prosecute and jail otherwise the government should just write down as many people had agreed on a contract of relationship and be done with it and then religious services and others are free to celebrate or not, and since there is market for it there will be some type of "church" that would celebrate 10 people of the same sex marriage between all of them. Racism is bad, bud law doesn`t really solve anything, so freedom of association is more important and of course allowing people to expose business that forbide them of participating, etc. Those are very conservative and classic liberalism points on minarquism, and nothing on then is based on biggotry of any kind, but I know most left wing are against it because they believe the government should be more active in progressing the society even if that mean forbidding free speech and other individual freedom for people that don`t keep up with time. For me those people are more evil than supposed fascists as they usually label whoever doesn`t align with them.

i certainly understand you talking only about hypotetical right, the problem was you automatically associating that with biggotry and other bad stuff that are independent of political inclination. Like if you put the hypotetical person against same sex marriage or stuff like that I could agree, because that is a common point for a lot of conservatives, but that doesn't necessarily means that person is homophobic.

Not sure what this results implies lol 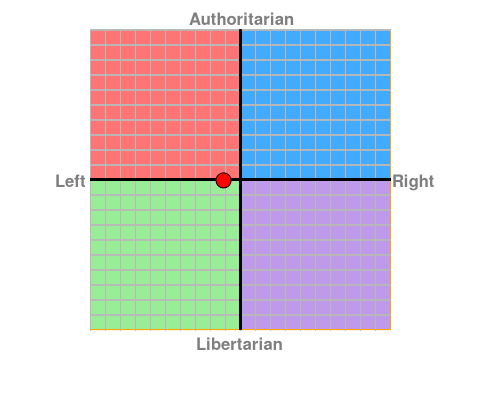 Honestly, I've never met a lesbian or a bi woman who was a hard-headed social conservative or a Trump supporter before, so the OP's inquiry is a totally hypothetical one for me. Never met an (out) lesbian or bi woman who opposed gay rights or considered herself an anti-feminist either, shockingly.

That said, my community voted 81% for Trump in 2016 and people all kinda know each other a little here, so I mean living here, you learn to get along with people like that and that they are, in fact, human beings. (Well...most of them anyway.) Thus, hypothetically yeah, I can imagine dating someone who was like that. As long as they're not super pushy to the point of like insisting that I should agree with them on immigration policy or Brett Kavanaugh because that's not going to happen. I do have experience dating women who were like libertarians and against gun control and that sort of thing and those things haven't proven to be a real problem. I'm not one of those people for whom opinion on tax policy is a dividing line issue.

Okay, I'll bite; opposing same sex marriage is denying someone (or rather, millions of people) equal civil rights based on their sexuality. How is that not homophobic?

There is no bite. It may be hypocrite thinking on their part due to religious thinking, same as they not wanting multiple people wedding and while still having a mistress. Those silly things about the santity of marriage and what the bible says. That doesn't mean they hate gay people or deny their existence. Sure for me it is a very silly and pointless thing to deny same sex people to marry, but it doesn't equate homophobe. I know this is toss around a lot and is dimissed very fast but it isn't unusual for these people to have family or friends that they love and are gay while not wanting the government to approve same sex marriage (yes it is strange and stupid but happens, people are generally stupid). We even have a lot of openly gay couple that oppose same sex marriage and say those should be reserved for heterosexual that wants to make a family under god and have their own children instead of adopting (yes those are very few people, still I now some). Again the things aren't black and white, it doesn't go from being pro gay to anti-gay, it have a very broad scale in between. And just to remind I'm in favor of the government not regulating who or whom many may marry if they are all over 18 year old without serious mental disease.

If a person wants to stop an entire class of people from marrying though, I think that at least on some level, they must be averse to that group. Otherwise why even care.

Sure it is a reasonable rationale, but again even some gay folks think that way. Your line of thinking would also make most of the minority movements biggots themselves because the care a lot and usually are very anti the people on the majorities that their groups are considered minority (a very big portion of notorious and outspoken feminists are very misandric, a lot of black minority leaders give a lot of anti-white speach, leaders of gays right movements put a lot of attack against religion and religious group, etc). I would guess a lot of times a portion of those against gay marriage isn't because of the act in itself (which as I said others against would just be because of "santity" of marriage), but because of wrong belief against what the leadership of those movements align with so they don't want to give away an inch. And finally, someone being right wing or republican, doesn't mean it is a caricature or even oppose gay marriage. For example what do you think about demanding that churches celebrate the gay marriage?