Forums - Politics Discussion - Would you date someone from the opposite side of the political spectrum?

Btw if you wonder how your opposite political side would like alike, maybe it can help you: https://www.politicalcompass.org/test

It's a bit US-centric though, so maybe fellow europeans and maybe other latin-americans will easily lean to the libertarian left. This is how I look 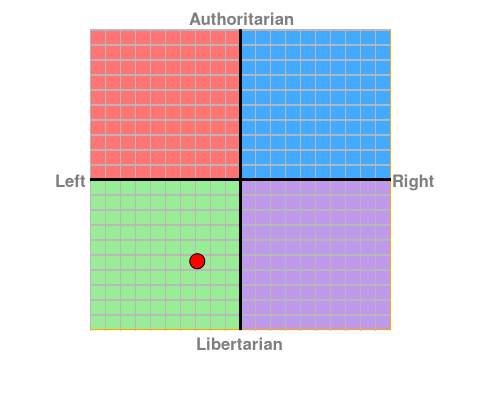 I did feel it was quite a US-centric test in terms of the questions; I have no doubt that I'd sit that far to the left if I lived in the USA, but here in my own country I feel I'm still left leaning but closer to centre, as I know lots of people way more left-wing than me, and I don't think I hold any beliefs that are radical or far left.

No but I would fuck them if attracted.  My ex preferred Trump over Clinton but she is dumb when comes to politics and really doesn't know shit so after ridiculing her for her thoughts on the matter she never spoke up again about politics.

Ha, yeah same honestly, I'll overlook a lot if it means a chance to have sex with a hot woman. 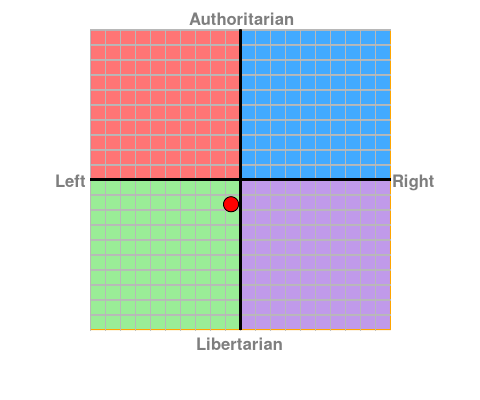 I wasn't kidding when I said I leaned slightly to the left.

That's kind of difficult for me to answer since my position on the spectrum isn't an area with opposites as such.

There are many examples on the left field of all those issues as there are on the right field. Being biggoted, evil, mean, etc, are independent of political inclination. I know very good human beings from far left thinking to far right, same for bad/ill people.

That is why I said my opposite political side wouldn`t attract me, because that would mean someone that want a dictatorship with very few liberties.

For me the government should only take care of national sovereign, judicial system, basic infraestructure and police with minimal cost to population. And sure I can make room for some social programs to prevent starvation, health calamities and basic education. But I`m totally against unecessary law. Government shouldn`t dictate who can marry and how many times, that is for adults in relationship to decide themselves. Sure if there are cases of abuse, like someone forcing, coercing or purchasing partners by all means prosecute and jail otherwise the government should just write down as many people had agreed on a contract of relationship and be done with it and then religious services and others are free to celebrate or not, and since there is market for it there will be some type of "church" that would celebrate 10 people of the same sex marriage between all of them. Racism is bad, bud law doesn`t really solve anything, so freedom of association is more important and of course allowing people to expose business that forbide them of participating, etc. Those are very conservative and classic liberalism points on minarquism, and nothing on then is based on biggotry of any kind, but I know most left wing are against it because they believe the government should be more active in progressing the society even if that mean forbidding free speech and other individual freedom for people that don`t keep up with time. For me those people are more evil than supposed fascists as they usually label whoever doesn`t align with them.

i certainly understand you talking only about hypotetical right, the problem was you automatically associating that with biggotry and other bad stuff that are independent of political inclination. Like if you put the hypotetical person against same sex marriage or stuff like that I could agree, because that is a common point for a lot of conservatives, but that doesn't necessarily means that person is homophobic.