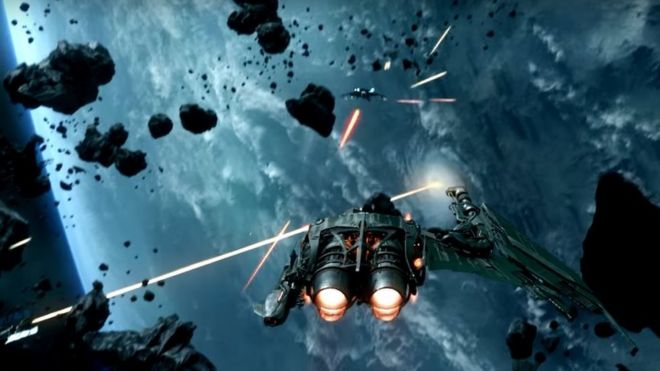 Crytek, maker of the CryEngine game engine, is suing the team behind Star Citizen for breach of contract. The lawsuit says CIG and RSI improperly removed the CryEngine logo when the game boots up, and that the teams failed to properly disclose modifications to CryEngine 3 as part of their licensing agreement.

CIG and RSI is selling two games, Squadron 42 and the Star Citizen Persistent Universe. Crytek says that since both use the same code, that constitutes using the engine twice and represents a further breach of contract.

Well, this will surely disrupt development of the games that is already more than five years in development.

Put a end to this perma early access mess.

Seriously, I keep hearing about it and how much money they've got from crowdfunding, my brother actually spent over £800 on virtual ships... before they even added them to the game or whatever! He just got an email telling him his ships would be ready to view when the beta released or something, and when the time arrived, oh wow he can walk around a space dock and look at these ships and fly them around a little bit, and he was like "Oh my god this is the best thing ever" and I'm like "... But you've just spent £800 on spaceships...", apparently he didn't care though, lol.

And after all this time, how close is it to being out? Because my brother lost interest in it ages ago, he doesn't follow the development of it and has moved onto new games... still has £800 worth of ships though if he ever wants to go back, so that's something I suppose.

Normally games being in early access or on kickstarter or whatever for so long doesn't bother me, but with Star Citizen just everytime I see mention of it, it irks me... not sure what it is, but yeah.

tl;dr Glad they're getting sued.

Yeah its pretty crazy how people spend so much money on...so little content.

A friend of mine, so stoked for the game and wanted me to join in (but I declined) spent about $500 on a space ship lol.

No way in hell would I pay that much for one game.

I love games about space and big on Sci-Fi but no way is any game worth hundreds of dollars, its as bad as buying $200+ collection editions :X.

Honestly I wouldn't be surprised if Crytek loses. CIG are using Amazon's engine aren't they?

I feel details are missing to be able to properly tell.

That won't make the game come any faster mate :)

Crytek has had years to converse with the Star Citizen developers and has failed to do so.

They are being a-typical of a company that is going backwards financially, where they resort to litigation to make a few bucks.

Hopefully if they are a successful they won't "forget" to pay their employees for weeks/months and close/sell a heap of studio's. But I doubt it, they seem to be keen on pandering to small markets like VR which simply isn't bringing in the revenue they need.

Well, not suprised they've become trolls in the end, given how Yerlis were always full of shit - they made one outstanding game (FarCry 1) and fairly good engine...and that's it.