My guess for Breath of the Wild is June, barring any ruses like Switch 2 coming in the Spring - in which case, Nintendo’s real reason for the delay was to save BotW2 for that date.
Taking Nintendo at their word, that they needed more time to work on the game, I doubt they’d announce Spring just to rush the game out at the top of the season. If they were delaying it for March, they’d have announced it for March or winter 2023. 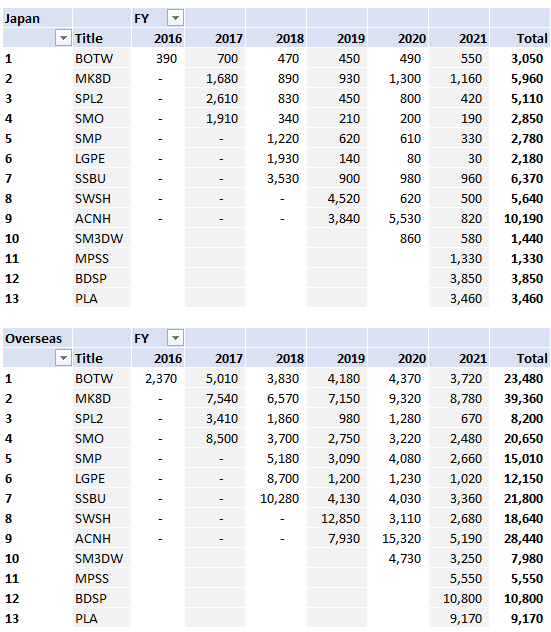 BOTW about 2 years away from 30M outside of Japan (excluding Wii U) and holding firm on #3 spot.  It just passed 3M in JP coming off a 550K year and should definitely get past 4M at this pace.

MK8D will pass 40M Overseas this quarter and 6M Japan as well.

SwSh will grind its way to be the best selling Pokemon game outside of JP in a year or two unless SV cuts into the legs.

SMO will pass 3M in JP this year and will grind its way to >25M Overseas in two years.

I can see June for Breath of the Wild. Especially before E3 as that would still be in the Spring release window. No chance at a Switch 2 though as Nintendo has repeatedly stated the Switch has supposedly only reached its halfway point of its lifecycle. I do see at least one more hardware revision though. So far it's been the launch Switch in 2017, the Switch Lite in 2019, and now the OLED model in 2021. So every other year there's been a hardware revision. I wouldn't be surprised if we get one more new piece of hardware in 2023 then in 2025 we get the "Switch 2" or "Switch Pro" or whatever name Nintendo comes up with. The hybrid model is too good for Nintendo to veer away from for their next-gen console.

Here is where VGChartz estimates stand right now for the Switch:

There are Switch consoles on shelves and it can take several weeks to ship consoles from the manufacture to retailers around the world.

Edit: A bit of a heads up. The CESA report has revealed figures for specific countries we didn't have much data on. Our worldwide total shouldn't really change much once I am done adjusting our figures. So if you see Switch figures changing I am just working on those adjustments. It looks like we are a bit too high in some countries in Europe which likely means undertracked in places like Asia and some of the smaller markets.

Over 100 million annual playing users is very impressive and that's still gonna keep going up for a while so even if the Switch doesn't surpass the DS and PS2 in units sold it seems guaranteed it will in peak active users. Though I wonder just how high the peak of that was for those two.

The 22% decline is a comparison to the pandemic year, so the decline looks more severe than it would have been otherwise. Switch did not need the pandemic boost to home entertainment to best its previous fiscal year of 21m (ending March 2020), but the pandemic certainly added a couple of million units, making it a 28m year instead of a 25m year or whatever it would been otherwise. The fiscal year ending March 2022 also didn't allow Nintendo to produce as many OLED units as they wanted due to the semiconductor shortages and we can tell from Sony's PS5 performance that the quarters ending December 2021 and March 2022 were most affected by chip shortages for both manufacturers, so Switch starting the calendar year 2022 with a global decline of 15-20% isn't something to worry about when we apparently have the worst of the shortage behind us now (Sony forecasts 18m PS5s for the FY ending March 2023, a significant increase over their hampered March 2022 FY).

Nintendo certainly knows more than us, because the first party release schedule for the second half of the current FY is still mostly in the dark. Given how much they've loaded up the first half, it's fair to assume that their second half will be big too, because otherwise they would have spread out their releases more. Plus their forecast for total software shipped would have been more cautious. This is essentially the fiscal year where Nintendo's first party output will have to prove how much truth there was to Nintendo's repeated statements of giving Switch a longer lifecycle than their previous consoles, and based on the picture we have so far, it already looks to be much closer to be the truth than empty words.

So the two major points are that we are allegedly past the worst of the semiconductor shortages and Nintendo's first party release schedule being more robust than in the fiscal year before. That's how it's feasible to have only a 9% decline.

A third major point is, like in so many years before, that a price cut is doable. Lite dropping to $170, original to $250, OLED to $300. But like in so many years before, this might yet be another instance where sales remain too good to necessitate this step, so it's a lot less reliable to be counted on than the other two points. I do not count on a price cut to happen.

A decline of only 9% in Japan might seem to be least likely of all the regions, but Splatoon is disproportionally more popular in Japan, so its third installment driving OLED adoption to new heights isn't far-fetched. There's also the Monster Hunter Rise expansion launching soon, so it's not just Splatoon 3 this summer.

I want to dedicate one post to my personal satisfaction about some games' sales.

Skyward Sword HD has non-existent legs with a sales progression of 3.60m to 0.25m to 0.06m. Unlike Hyrule Warriors: Age of Calamity which sold well above the norm for Warriors games, SS HD couldn't benefit from the Breath of the Wild boost. And with that all the dumb excuses and decade-long deplorable attacks on Wii owners are toast. Looks like Wii owners and Switch owners aren't that different, after all. No surprise to me, but probably shocking to a lot of people.

Super Mario Maker 2's legs have stalled as the game failed to clear 1m during the fiscal year. This means its sales are confirmed to be under 8.15m through 12 quarters. Meanwhile, the real Mario game New Super Mario Bros. U Deluxe has reached 13.30m through 13 quarters, so it's well on track to double Super Mario Maker 2's lifetime sales. Now keep in mind that we are comparing a new game vs. a port here, and the port is smashing the new game. The Super Mario Maker offspring cannot replace the original SMB series and that's excellent news. While this may still not motivate Nintendo to make a new SMB game, at least it's now confirmed for good that there's no factual basis to forego making SMB games in the future.

As a sidenote, this is the third consecutive fiscal year where NSMBU Deluxe has sold more units than Super Mario Odyssey. Not that I dislike SMO, but I am a strong proponent for making both 2D and 3D Mario games, because that's rational business sense. I guess it's at least something that Nintendo could get themselves to make Switch Sports, but on the other hand, it goes to show how deep the disdain for 2D Mario runs inside of Nintendo.

I don't know what has blown away my expectations more:

Great numbers all around. My Switch prediction of "125m shipped by December 31, 2022" still looking good.