Jumping in here because you and I may have had a similar disagreement.
From my perspective, I feel I only have good intentions for the US. In spite of not being from that country, I care whether or not people anywhere have access to healthcare. Precisely because every other developed country does it.

The only prominent politician I trust (at least as far as I can trust a politician) in the US is Bernie Sanders. Because he has a a trackrecord spaning several decades of turning down big corporate donations. (That's my criteria. It doesn't have to be everyone elses.)
I also agree with him on several issues, in partiucular healthcare and the climate.

Those, along with injustice and unnecesary gun violence, are probably the main issues I speak up on. I wish I could devote as much of my time to every important issue, but I only have so much time in a day, and I have my own country to worry about on top of that.

But from your perspective, perhaps I'm an outsider that wishes harm on the US. I don't know.
I assumed you tought I had good intentions. But the way you reacted to me saying positive things about Bernie, or negative things about other politicians, and seeing your disagreement here with Mnementh (he claims he said one thing, you claim he said/meant another), makes me unsure of that.

In my mind, anyone that geuinely wanted to have Trump replaced with someone a lot less Trump-y, is an ally. Even if we disagree on how to get there.
It's nothing compared to the disagreements I have with people that think police brutality is ok, that don't want universal healthcare because reasons, don't listen to science, etc.

Though for the record, if I was eligable to vote in the US, I would vote for Biden after he became the nominee. He's far from my ideal, but Trump is just extremely dangerous. To the environment, to public health, etc. They're not comparable.

Well there are provinces. Catalonia, Quebec, Balochistan, Kashmir, Hong Kong, etc, etc. I think the question is about relativism, not absolutism. So which are you more loyal to rather than which are you loyal to. There were other questions asking about absolute loyalty I believe.

Oh how very innocent. There are consequences for the entire world based on the leaders of the US sadly. An easy example is how Trump hated Iran and loved Modhi which has a net negative effect on Pakistan bit wanted to get out of Afghanistan which has a net positive effect on Pakistan. He also dropped a whole lot of bombs, more than any other which is a net negative for my region but it's not like Obama and Biden didn't drop their share of bombs and drone strikes. The most famous example anyone can point to is how Obama authorized a drone strike on a wedding in Pakistan. No one there was a terrorist. He just killed people on the day that was supposed to be a joyous celebration. And let's not forget "The mother of all bombs" Trump dropped in Afghanistan for some reason. Killing army leaders in Iran isn't good for us either.

And that's not even talking about trade, antagonism towards our allies or the opposite, relations with China and how they affect us, the secret intelligence stuff that they hide from us like which terrorist group they secretly support or whether they support the rebellion in a nation vs the main government. And then we move onto climate. Through no fault of our own, we are dependent on what big nations like China, US, Australia, etc do with regards to their climate policy. We smaller nations only have a small contribution either way but we suffer just the same.

So saying who leads the US doesn't affect us outside the US is very very short sighted. A Bernie Sanders presidency or someone like him would be a benefit to humanity as a whole, not just the US. We're talking climate, war policy, trade, diplomacy, workers' rights, human rights around the world, etc, etc, etc.

With all that said, I didn't post it here but in all the tests, I'm certifiably left leaning and libertarian. Not all the way to the left ala communism but still very much left. And halfway between centre and full on libertarian.

Again pretty centrist on most issues.

The political compass test also puts me quite far to the left, and a lot of the questions are strange.

Like, apparently I'm a far left commie cos I think it's okay to have sex outside marriage, that universal healthcare is a good thing, that same sex couples should be allowed to marry, and that companies shouldn't be allowed to abuse their employees. XD

In the eyes of 70 million people all of those things are proof that you are a filthy commie and probably sleep with Putin while you suck on Maduro's dick. Those are just facts.

A lot of these kinds of quizzes have odd questions that seem to kind of put you on the spot and lack nuance, especially when it comes to economic issues. Like, I'm in favor of a primarily market-based economy when it comes to production and allocation of most consumer goods and services, but I also believe the government has a valid role to play as a regulatory body and does certain things (e.g., military defense, infrastructure, health insurance) better than the private sector. You would think that would put me closer to the middle of the economic axis, but apparently these quizzes give results that give the impression that I'm some kind of hardcore socialist. On the social issues, though, I am pretty damn libertarian. You do you.

I tried the 9Axes test, but that one is even more problematic when you're not American. Some of the questions are impossible to answer because they're completely relative. For instance, "Police need more power and protection": more than what? More than they currently get in the US, or than they get here in Belgium? The current situation in these two countries is very different.

Also, all the 'federal vs unitary' questions only make sense to the US. I live in a federal country too, but the dynamics are completely different here. For example, "It's a good idea to test a policy in one state rather than implementing it nationwide right away" does not make sense to me, since our federal government and regions work next to eachother (so they would never be concerned with the same issue). 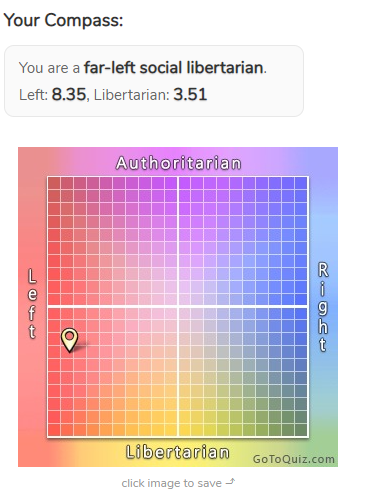 Anyway, I agree. There is no nuance to any of these questions.

Like, illegal immigration for example is a difficult and complex subject. I think many people know that ultimately its not good for a large influx to overwhelm your infrastructure. And you also don't want them to be exploited as a cheap labour force. But you also want to be open to people in need. So, you want to look at the cause of it and see what the root of that problem is and work from that, or you can be a simple mind and hate brown people taking yer jawbs.

Took 9Axis one too 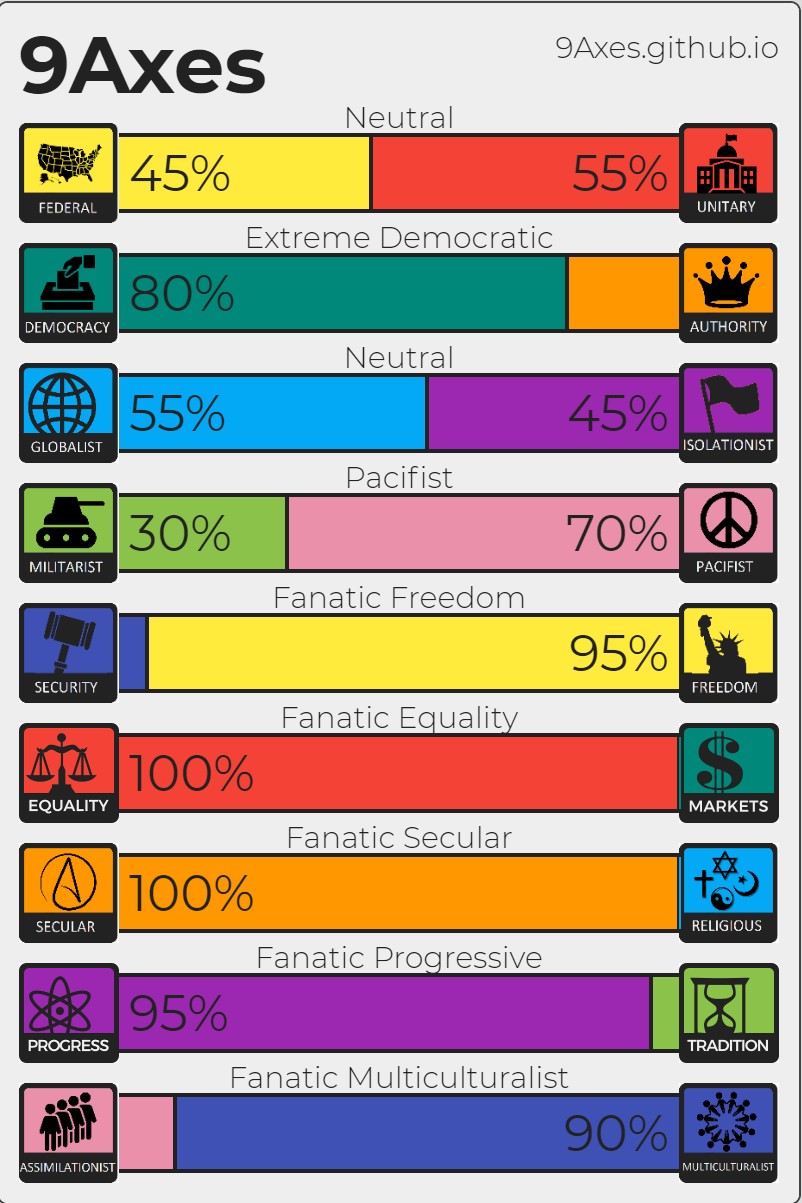 This one made little sense.

I don't think any test or quiz can actually determine your leanings 1 on 1. It's much more complex than that and if someone sat down and tried to create a test that's much closer than the ones available, the test would be so damn long no one would wanna take it anyways. Imagine spending like a week on a test or something.