Classic Rol 😂. Did you join the Trump protests? How was the atmosphere?

Whoa, I wouldn't have pegged you for a neo interventionist Shika XD

Well, if anything... this goes to show it's perfectly possible for a far lefty like me to be good friends with someone who's standard Republican right wing. Again, no offense intended either. 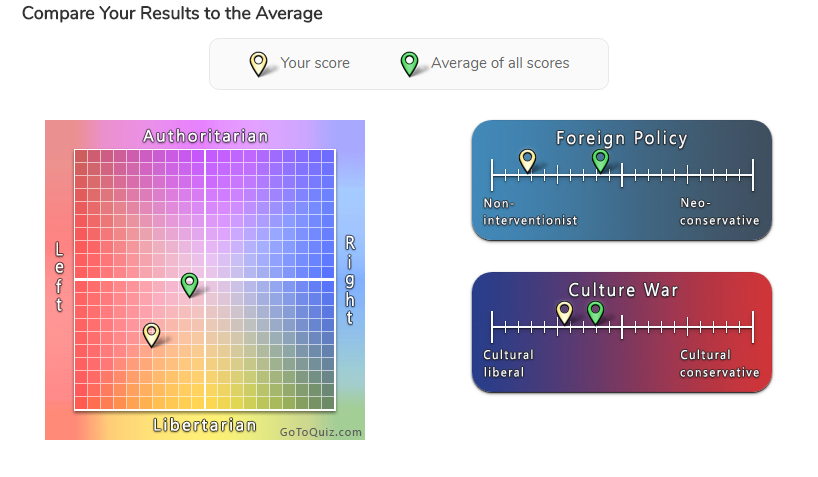 I also feel I need to add: I highlighted that I believe in strong gun ownership, showing decorum to elders (not deferring to them, but if you want to disagree, don't show them your rowdy side. Show them you're better and more of a moral example than they are), am virulently anti-censorship (no, banning DJT from FB and Twitter will just take his shoutbox to Parler and then people won't know where these rioters assemble, and also believe abortion shouldn't be available on request but should be available widely and de-stigmatized (as in, treat it like any other medical condition and refuse to let politics into it) and also believe in patriotism - I just don't believe boots on the ground everywhere and "my country right or wrong" is a healthy form of displaying love for your country compared to foreign aid, assembling a multinational team of astronauts for Mars (led by your country) and trying to show dictators and strongmen you're so much nobler than them you aren't going to give them the cold shoulder, but you don't expect to agree with them.

How did you block the politics thread Shika?

You're not risking "life and limb" if you're just overstaying a visa though. I also very much doubt many Mexican people (if any) would be persecuted or killed if they returned to Mexico.

Yeah, contrary to what many seem to believe these days about the right and the left have drifted so far apart that it is impossible to have unity between them, I think it is possible, it's just a matter of finding common ground, such our shared loved of video games.

I definitely agree with you on alot of that. I support gun ownership and think it would be true crime if Biden, the democrat controlled house, and the now 50-50 senate manage to pass considerably stricter gun laws, especially if they manage to pass an outright gun ban (I live in a family of hunters, and though I don't personally hunt, I do enjoy going shooting at a target range, so that would not go over well at all with me and my family). I also believe in respecting your elders and tend to think that my fellow millennials and especially gen z have become far too disrespectful of the older generations, particularly the boomers, but also remaining members of the silent generation and gen Xers (I really hope that gen Alpha and later on gen Beta are far more respectful of elders, because I would hate to get treated like I see the boomers being treated when I get older). I'm also strongly anti-censorship be it movies, games, or what we post online, and definitely think that social media censorship has gone too far recently, they've been censoring anti-CCP sentiment, censoring Trump and conservatives in general, if something as basic as free speech isn't being protected just because we are online, something is badly wrong with the state of the world. I am pretty strongly anti-abortion personally, having held my severely premature sister in my hands and seeing how well formed she was, I strongly believe that life begins at conception (backed up by evidence of some babies having memory of being in the womb), so I cannot in good conscious support abortion, except in cases where the mother's and babies' life might be at risk or in cases of rape. I also believe in patriotism, keeping a strong military even if it's not used, but also in using said military if say a dictator needs to be toppled and diplomatic options like sanctions have failed. As for multi-national cooperation, I support it to an extent, though I feel like things like the EU go dangerously close to a one world government, which I am strongly against, but things like a multinational mission to Mars I have no issues with. 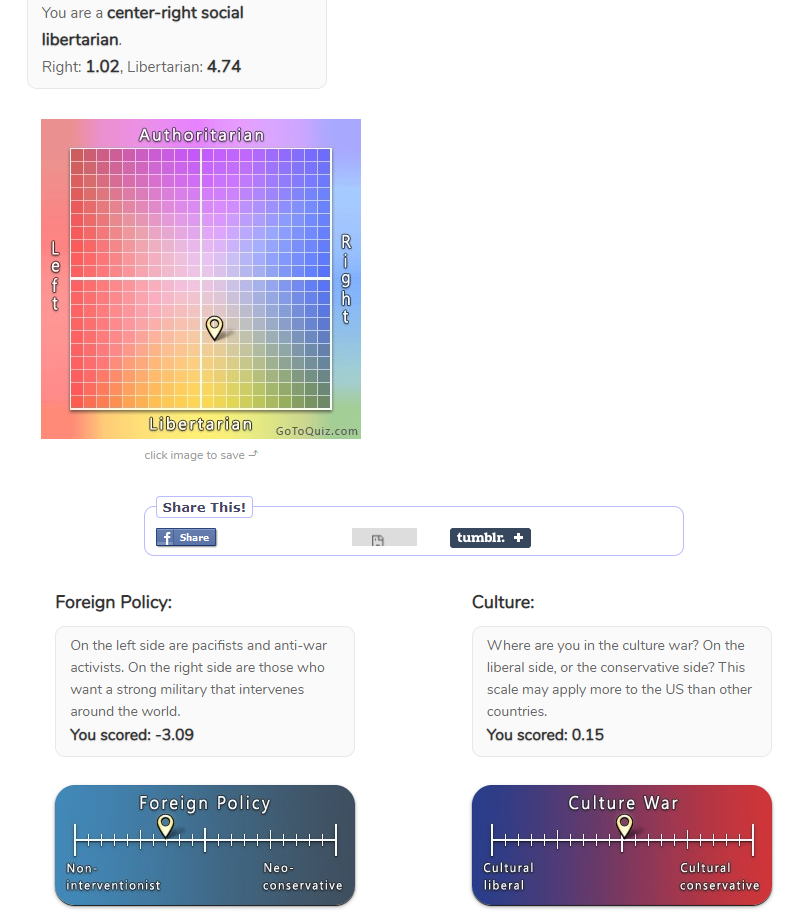 Overall the results seem about right for the most part. I'm definitely very non-interventionist (almost isolationist really), but nationalist. Very libertarian on most social issues, but believe in much tougher sentences for certain crimes. Very anti-religion in public life. Slightly right wing on economics, but my views on this have softened in the last decade - I don't feel the economic arguments are as important as the social and foreign policy ones.

Culture war I don't think it's got my position quite right really. It depends on the specific issue in question, but I find myself more aligned with cultural conservatives in general despite being - or perhaps because I am - very socially liberal. Free speech is vital, identity politics is cancer for society, and the left has become very illiberal. We in the UK seem to be intent on importing wholesale the worst parts of the American culture war, which is worrying and slightly depressing.

Well, guess I'll just have to live with that in my feed.