DF with their thoughts on the teardown. Impressed with the cooling and dust management. Reaffirm their presumption that the PS5 costs less to manufacture despite its larger size. Some interesting speculation in the comments too about the possibilities that Wifi 6 and Bluetooth 5.1 could provide for things like PSVR2.

Theoretical max. Wifi 6 bandwidth is 9.6 Gb/s, in reality probably even less (especially if other Wifi devices are in the same room). Could work for wireless VR, but wouldn't leave much room for a resolution bump for PSVR2.

Other wireless adapters for VR (DisplayLink, Vive) already have a max. bandwidth of 24 Gb/s:

If the io throughput speeds is 9 gb/s, how does the bandwidth being roughtly the same affect things?

I'll just say that the PS4 had an issue of not having any killer apps that weren't already on PS3, early on.  When The Last of Us is a pack-in with the console, it isn't a good look.  You're naming off games, but I was naming off stuff in my actual collection, and I didn't name everything at that.  Zone of the Enders 2 is on PS4, and in my collection.  I didn't name it because it felt like a game that had a place on PS4.  Not even the PS3 version was just a simple port, the game was sharper, and ran at 60fps.  Then the Jak collection is also on PS4, Which I also didn't name, because I don't own it on that platform and it's even worse than the PS3 version.

I don't think everything in that list of yours even counts.  Like, why is Wipeout HD Fury in there?  Because a few tracks got brought over from the PSP game?  I mean, if reusing a few minor assets is all it takes, why isn't Tekken 6 on your list too?  Most of the game's animations are recycled from Tekken 5 anyway.  And Resident Evil 0 & 1's a substantial increase over the originals, too.  But, some stuff like the Jak collection, shouldn't have been on PS3.

One thing that really pissed me off about the PS4 is how it overheated on me and died 3 separate times. Initially, I thought it was just because my roommate stored it in an area with poor ventilation. But he proved that wasn't the case. Not being able to do such a simple task as replace the thermal paste on my PS4 really killed it for me. The PS5 build looks like it's a little easier to take apart and put back together.

Anyway, how exactly did you manage to replace the thermal paste? I recently attempted a teardown of my brother's PS4 Slim, and found I would have needed to grind some bolts away just to get at the motherboard. It's at that point that I gave up.

Wait, are you saying that the PS5 has some sort of liquid beads that can potentially slip through foam and brick it? That sounds like a nightmare for longevity. All I want is a gaming system that is reliable, and that I can fix myself. That's why I'm going PC this upcoming gen.

From what I know it is possible to reapply the thermal paste on PS4, and PS5 cooling solution is already in use on PC.

As I wrote, you will probably get less than 9.6 Gbps in most rooms due to interferences of other WiFi devices.

I'm sure if Sony wants a wireless VR solution via WiFi 6, they want it to run flawlessly for the majority of PSVR users... so they won't expect 9 Gbps or even 8 Gbps, probably more in the 6 - 7 Gbps area to be on the safe site. And to avoid latency issues, sending an uncompressed video to the headset would be preferable.

It would be nice if Sony maxed out PSVR1 games on PS5. Some of them are sub-1080p on PS4 Pro and most of them are under 120 Hz. With additional rendering in higher resolutions and then downsampling to 1920x1080 (this resolution scaling is already supported by SteamVR and improves the image quality) the improvements could be huge, even with a PSVR1 connected to the PS5.

But what improvements would PSVR2 have over PSVR1 on PS5? Obviously a panel with higher resolution would be the biggest improvement for the image quality... This would also allow a bigger field of view without a worse pixel density. And I hope that Sony stays at 120 Hz and adds HDR 10-bit for VR games.

Depending on the resolution bump of the headset-panel WiFi 6 wouldn't be fast enough in most cases: 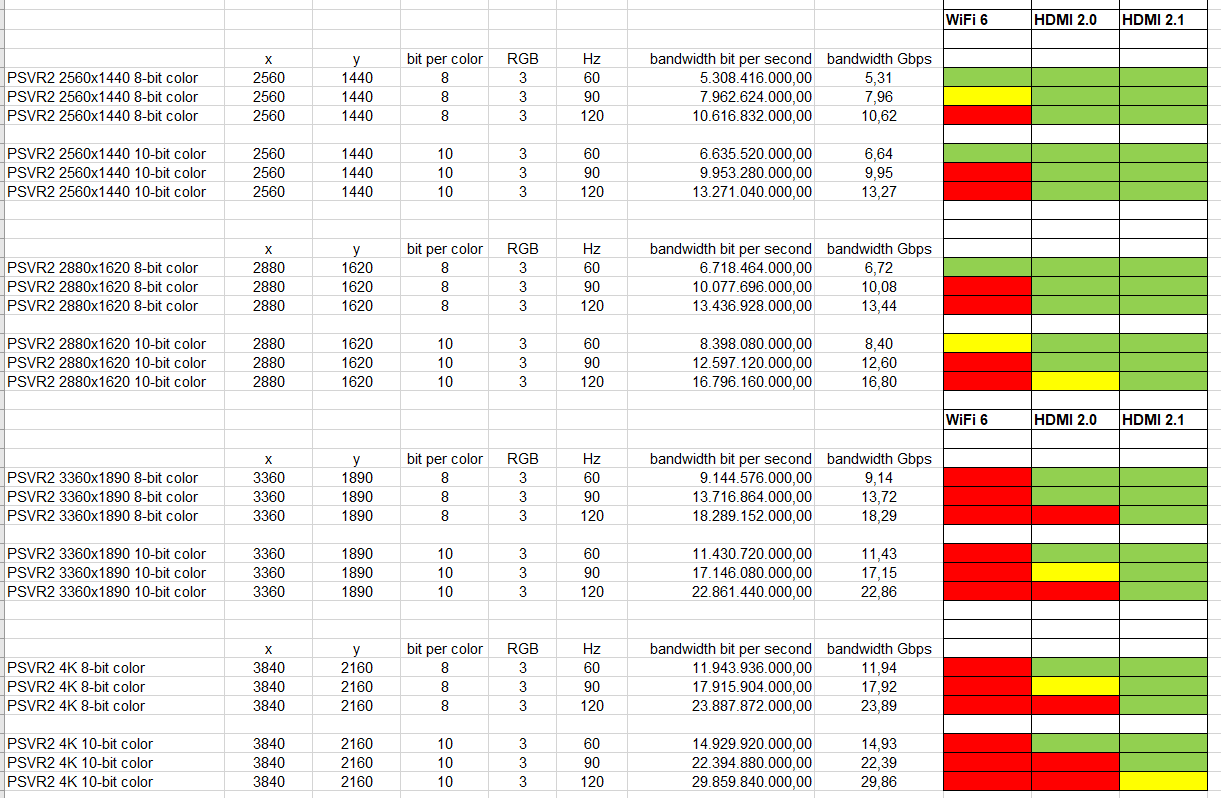 So if a cable means much better image quality compared to wireless compromises, I stay wired.

That's the thing with Liquid Metal. It acts kinda like a liquid. That's why for laptop overclockers who want to really do LM on their laptops, they have to contain any potential spills by applying a electrical tape barrier or a foam barrier. For PS5, there's only going to be a small percentage of users that will be moving this around. It's not a portable laptop. And even if they do, it seems that Sony created barrier around it. Only time will tell if it was designed well but that can be a potential point of failure if not handled properly. Spills happening in a properly applied LM is very small.

If Sony allow PSVR2 to be used wired for maximum performance and on battery with degraded one I certainly would prefer to be on the first, but would be good to have options anyway.

I wonder if they could use multiple I/O channels, if they are outputting separate streams for each eye anyways?
That could use the USB connections while leaving WiFi free (or possibly just for tracking info, video being on 1-way channels)