I'm not sure if there were defect models or if it was due to dust build up in the heat sink. Mine did sound like a jet engine 2 years ago,  for a day,I took out the heat sink and found roughly 40% of the covering was covered in dust. After I vacuumed it out it became whisper quiet. I thought it was expected that we clean our consoles at least once a year. This might explain why they added dust collector locations and a bigger heat sink. The bigger fan drawing out heat from both sides will definitely help and keep things quiet if dust build up does occur. Less maintenance.

PS4/Pro left vs PS5 right. The top right portion of the PS5 heatsink looks to be quite similar in size and shape to the PS4/Pro heatsink. That's only around 1/3 of the entire PS5 heatsink. 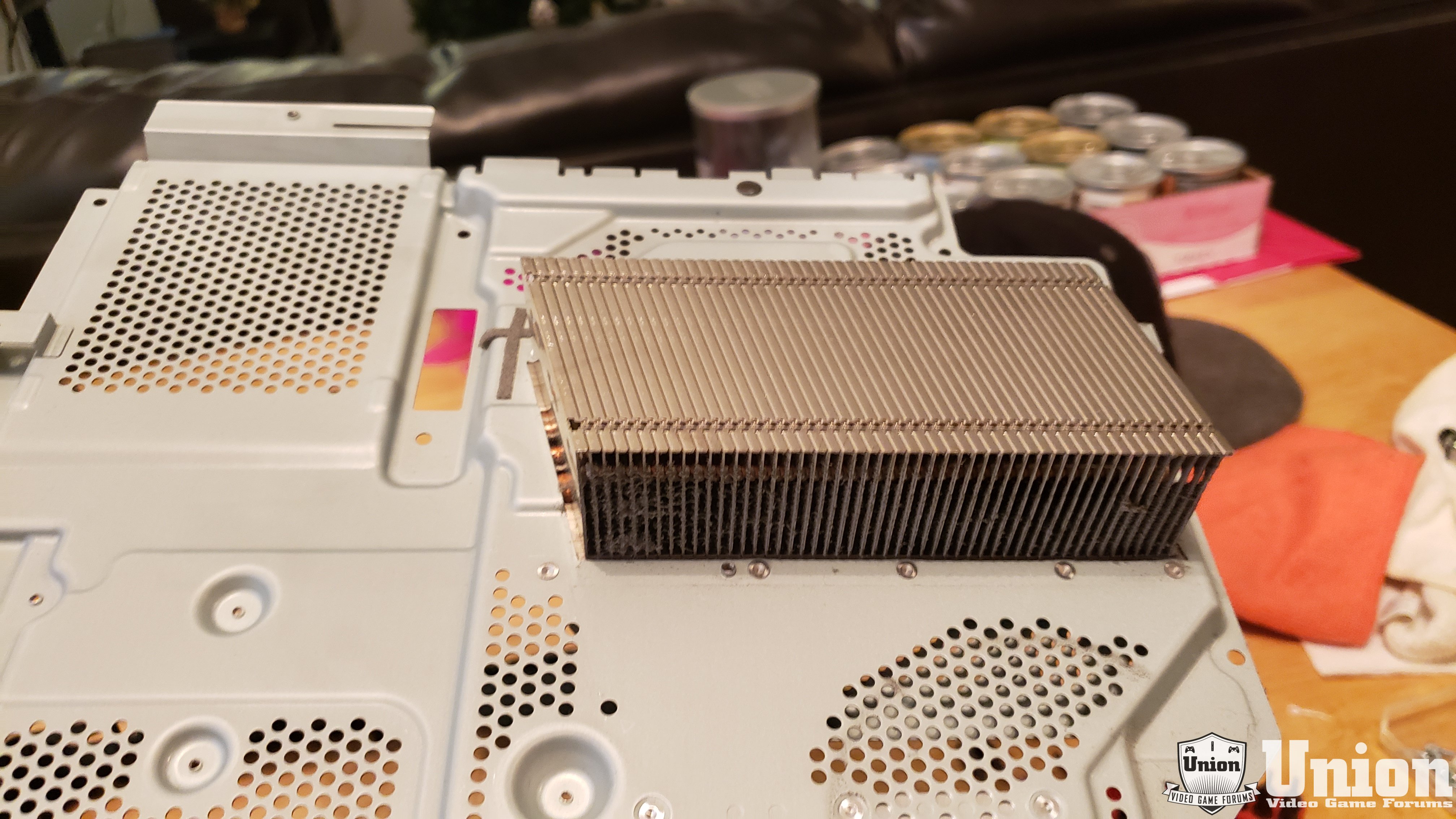 PS4 left vs PS5 right. Pro and PS3 Slim uses a 95mm fan though both don't look as wide. I thought PS3 fat was bigger yet, though it may be 95mm as well. PS5 uses a 120mm fan and a wide one at that. Less rotation, less noise. 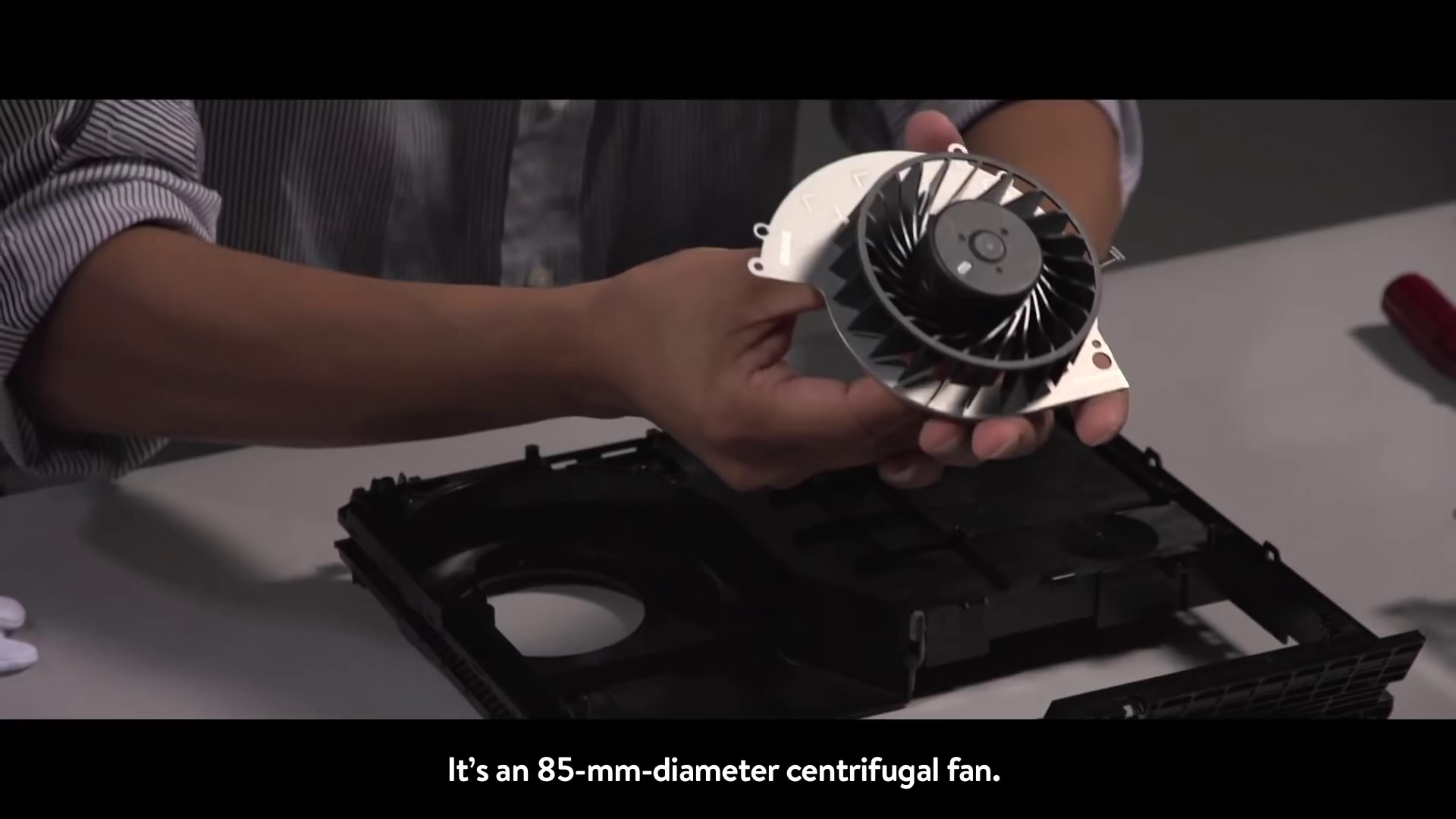 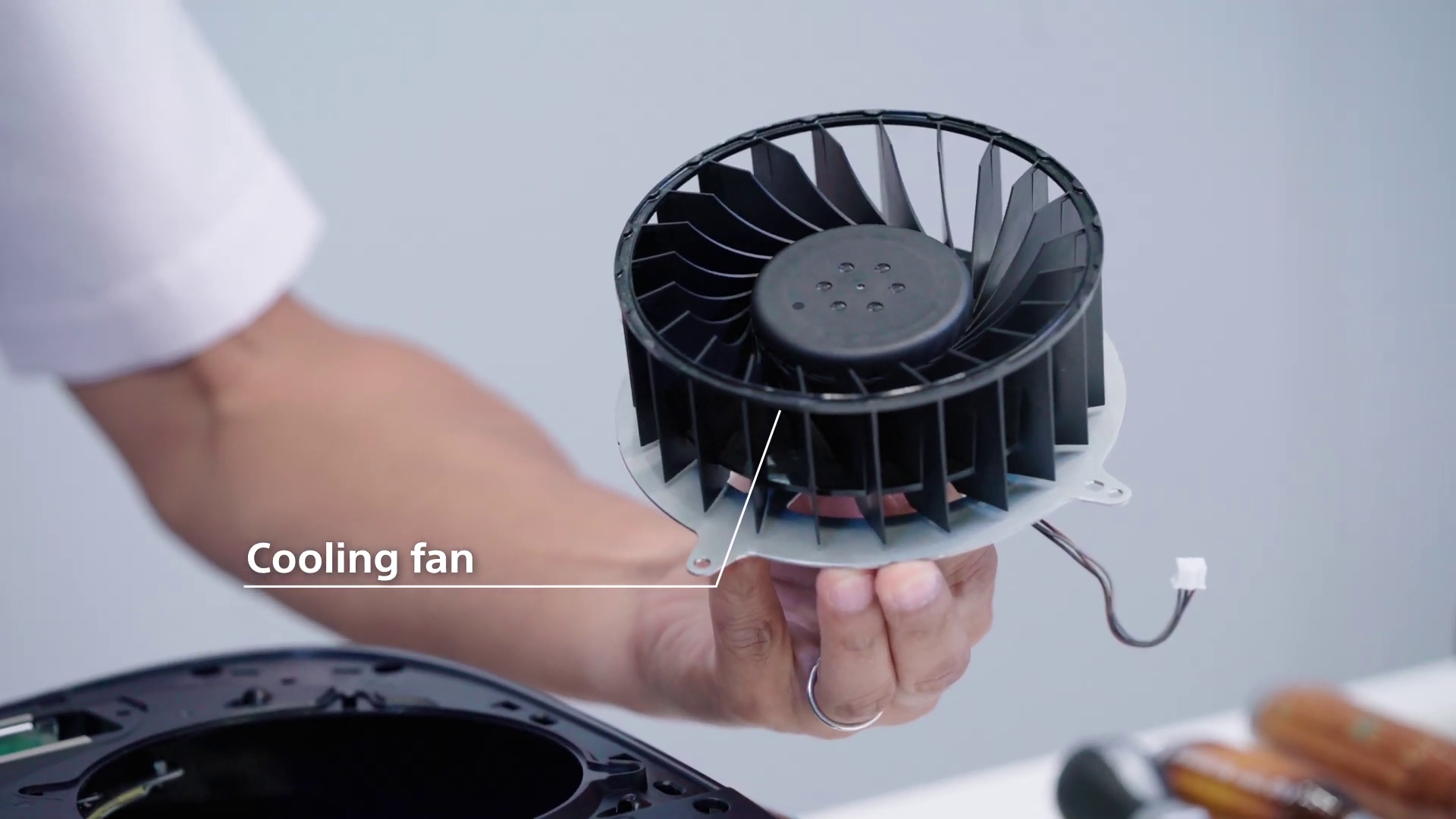 PS4/Pro carbon based thermal paste (+ cleaned) vs PS5 liquid metal thermal paste (with leak barrier). Liquid metal has much higher heat transfer capability, yet is electrically conductive, so it can't be allowed to leak off the APU die. 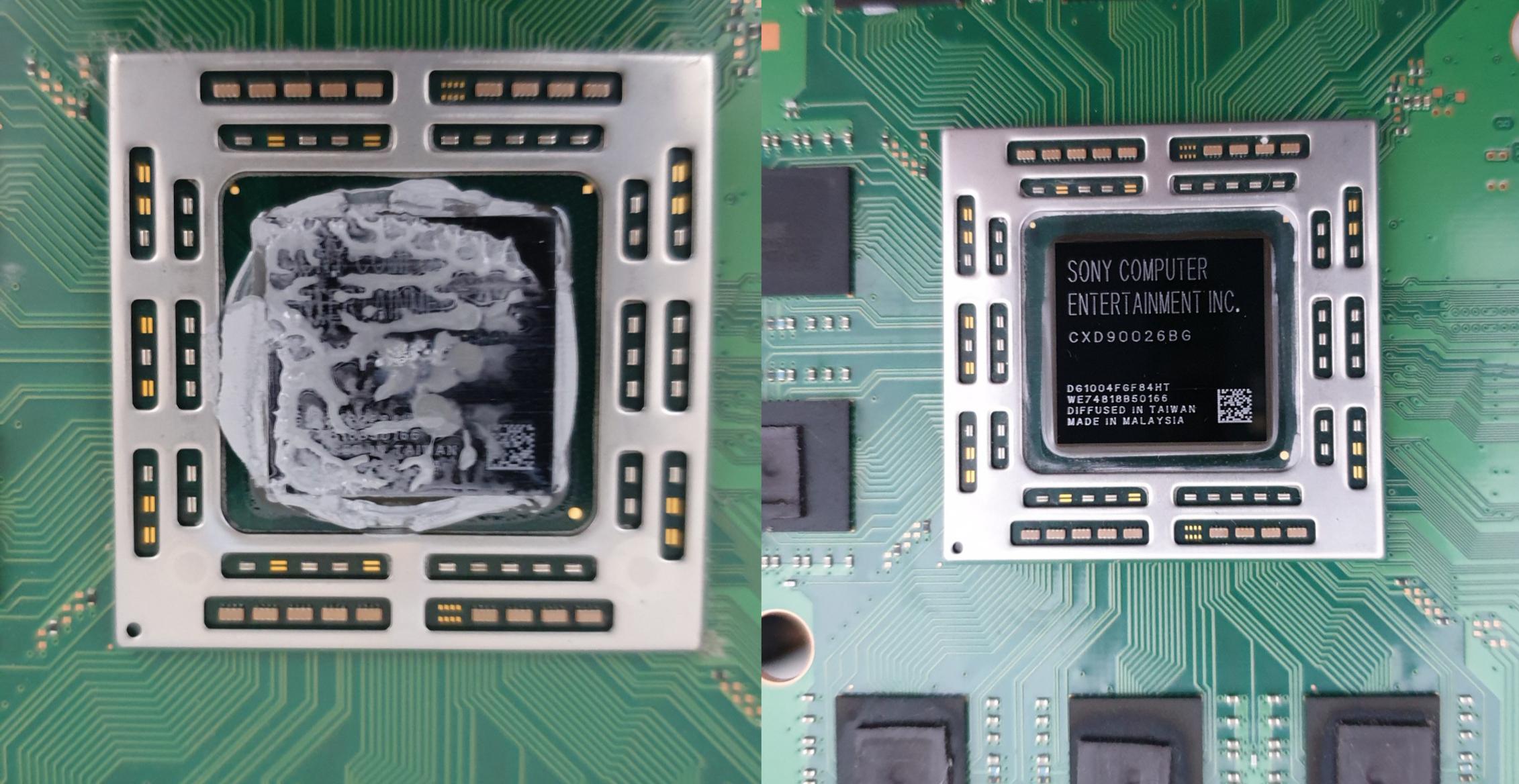 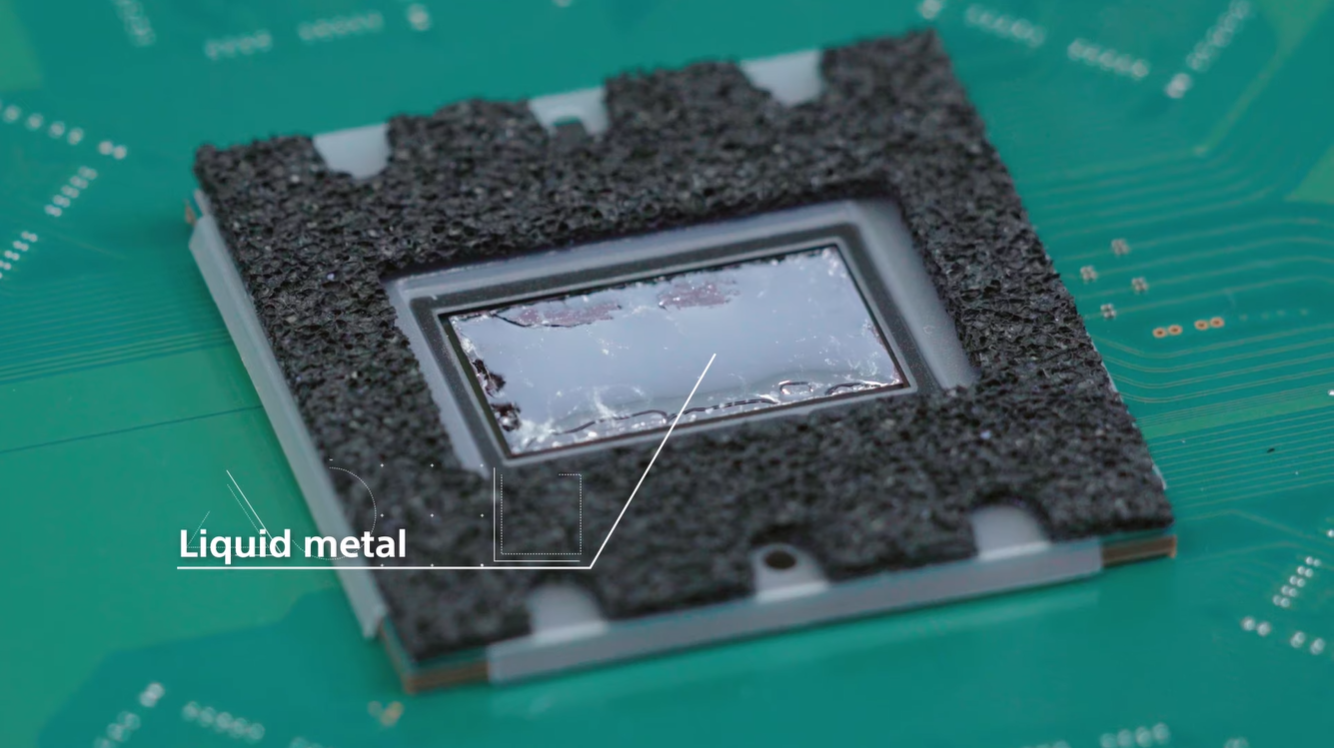 Quite impressive in it's own way. Little reason to think this thing will ever get to a point that's unacceptably too noisy for the overwhelming majority. I wonder cost wise, how expensive these items are vs XBSX? The heatsink isn't vapor chamber, only having heat pipes, but it's considerably larger than XBSX. The fan sizes are similar between both, though different style fans. The liquid metal cannot be all that cheap but if it's being mass manufactured at this level it's likely cheaper than one might assume. XBSX could be using a higher end carbon based paste which should still cost less. 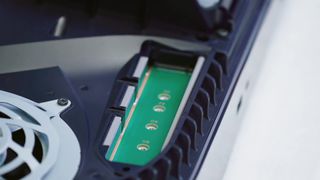 Now just tell me I don't need a recently released NVMe SSD just to store and transfer games. It does say, "with PCIe 4.0 support" so hopefully lesser is ok if you don't mind transferring to the onboard SSD. What are the odds the grey SSD cover plate has a thermal pad on the back so that it get's used as a heatsink as well?

Reminds me a lot of the PS3 higher end build quality overall, without any of the heat issues. As far as we can tell for now anyway. It certainly gives the impression it's worth $500.

The coolers or heatsinks shouldn't be hugely different in price. Reason being vapour chamber coolers are generally more expensive to produce due to the way they are manufactured. Which is most likely why sony opted for standard heatpipes and more aluminum fins for extra cooling capacity. Like they stated if you have enough heatpipes in contact with the heatspreader its offers similar performance. Additionally they are able to cover a larger portion of the PCB if there are other components like VRM's, NAND/controllers and other parts to cool.

Thermal material cost will be pennies difference for companies, the cost to add it to each board is what I feel is the actual cost differentiator but assuming they have the manufacturing down to a T it shouldn't be an issue. But yeah adding liquid metal to each machine is more complex than adding some thermal compound to the heatspreader and attaching a heatsink.

I think the grey plate is just a cover, probably to protect the I/O or SSD from dust.

In any case we should have vastly improved acoustic performance in the PS5 over PS4. I still think the Series X might just beat it there because it has the bigger fan but honestly I doubt there will be much in it. We had Japanese Youtubers stating that it was quiet and cool when playing games, which is reassuring.

It's just hard to believe that, that much metal, can be a lot cheaper. $1.00 on 100 million consoles though is a lot if that were the savings for that part. I figured it must have been considerably cheaper (en masse) to go that route. I didn't consider tying other components into the vast spread of heatsink.

Well I just wonder if the PS5 rumor of going with a more expensive cooling item was the liquid metal. It's really unlikely the fan was smaller or had really cheap bearings/bushings, and the next step up for a heatsink would basically be a vapor chamber. I wonder if they were planning on either liquid metal or a high end carbon based paste? Another rumor said they were still having some heat issues earlier this year. Maybe the carbon based paste wasn't allowing enough heat transfer and it was causing the fan to ramp up too much, causing unacceptable noise as per their goal? They may have spent 2 years working on the liquid metal idea just in case, but if it ended up considerably more expensive, it would still be a question of whether to use it or something cheaper if they could.

I'd guess the NVMe slot plate is more so for anti interference like how the rest of the mobo is covered except for the wifi. I don't see why they wouldn't use the metal shield as a heatsink as well. Otherwise you could probably get away with leaving the metal shield off and applying a slim heatsink to the NVMe stick.

Its probably going to cost around the same if not a bit more. Take for example Nvidia cards FE RTX 3080 and RTX 3090 cards those coolers will be more expensive than a standard cheap AiB cooler due to the vapour chamber heatsink. A higher end card with more heatpipes and more surface area (fins) might cost the same as said FE cooler, but will also provide more cooling capacity. At the expense of size, form factor and weight.

Sony said they were working liquid metal and cooling for 2 years so they must have had a thermal figure in mind. LM is one of the best TIM available, so they went with that not much point to speculate otherwise. They probably thought we have 250+ watts to dissipate, we need to go all out.. which they did.

Well if SNY could have gotten away with a heatsink similar to what XBSX has for very close to the same price, I can't believe they wouldn't have done that. It would have allowed them to make the console quite a bit smaller, and SNY knows how everyone likes to pick on big electronics. Also cheaper packaging and shipping, more shelf space, etc. It's just a size thing. It's hard to take the price and manufacturing of smaller more efficient tech into account unless you have pretty decent knowledge of all that.

Who knows. I just couldn't help but wonder. You're right, they would've had a decent idea that they may need a remarkably high end TIM, though they obviously don't want to have to spend too much extra if they could get away without it. The fact that they are using it, says they've decided it needs something like liquid metal, which they planned for one way or another.

Well if the PSU is 350 watt, the typical draw should be around 200w give or take. That's total power and not all APU, though the APU would be pulling the majority of that. *Actually, with the way PS5 operates, the power isn't supposed to fluctuate that much, so maybe it is more like you said. Maybe not 300, but perhaps 250, since that would be around 70% of the total PSU.

Well yeah they went with high clocks which means a lot of heat to go in a small die. More cost efficient APU and design goals so they needed a beefy cooling solution. Which also meant taking TIM in consideration. Different design methodology between the console manufacturers and tbh I find it facinating, its different.

If I had to guess that APU will be pulling around 230-240W. Leaving the rest of the components and some headroom for the PSU.

Nah, just a bit of laddish and self-satirizing humor.

Actually, I'm a little curious as to whether this was all out overkill based on some earlier rumors. Either way what they've done here looks great.

With the rumors of AMD's Big Navi GPU, the model in which seems to be what the PS5 GPU is based off of, leaks show it could be capable of 2.5GHz max boost. If SNY was originally shooting for this, or as close as possible, they almost certainly would've based the cooling system off of that, considering it would be the worst case scenario in terms of thermals. Maybe even the CPU was originally planned to have been clocked somewhat higher as well, since XBSX has higher CPU clocks.

With the CPU and GPU being clocked at where they are now, it could be the case that SNY wasn't quite able to hit their assumed peak GPU clock, and therefore also were ok with a slightly lesser CPU clock as well to go along with it. Not much point in having excess CPU or GPU clocks for little reason in a balanced system. This would also help with APU chip yields and costs.

If the close to final silicon wasn't quite able to produce the upper limit of their goals, SNY should've already had the cooling system finalized by then. This would mean since the APU clocks ended up slightly lower than anticipated, the cooling system would be a little bit overkill, and likely too late to change it. Instead of having to cool around 11.5TF of GPU performance, it would only have to cool 10.3TF.

This also makes me wonder about the PS5 testing rumors of it running hot. If the reason for the liquid metal was due to having to potentially cool the GPU, and possibly CPU, at higher clocks than now advertised, since they ended up below those goals by a little bit, perhaps they decided to try and test with a cheaper thermal paste as well. They could've tried a higher end carbon based paste, which would've saved them some money, if it would've performed sufficiently.

Then we heard afterwards (can't remember if it was rumor or legit), that SNY had chosen to go with a higher end, more costly thermal solution. I wonder if they tried carbon paste, found it didn't quite keep the system cool and quiet enough, and decided to stick with the liquid metal anyway. Play it safe, and be better safe than sorry later on.

Did SNY have higher clock goals in mind initially, and would the PS5 had run near as cool and quiet in this same configuration if they had met those goals? This is just speculation. I don't have any particular reason to believe this is the case. The question based on the rumors and final outcome just came to mind.