Forums - Politics Discussion - J.K. Rowling Writes about Her Reasons for Speaking out on Sex and Gender Issues

I saw that J.K. Rowling (some may know her as the author of the Cormoran Strike and Harry Potter novels) wrote an explanation following the backlash regarding her support of Maya Forstater, who lost her job after a dispute on transgender identity. I thought I will share this to ask for your opinions:

One completely out of context citation to get a feeling: "But accusations of TERFery have been sufficient to intimidate many people, institutions and organisations I once admired, who’re cowering before the tactics of the playground."

And to be balanced I also link to a letter answering to this:

And another completely out of context citation: "To me, Harry Potter meant that no matter who you are or how you were born or how different or difficult your life was, if you fought against oppression with love, you would win. At 24 I’m realising that might not be true. And wow, it hurts."

I personally see a point at both sides of the discussion and see that some conflicts might not easy to resolve for both sides. So I am conflicted as to where to stand on these issues.

I hope good solutions can be found that are satisfying to both sides of this dispute and realize the safety of all the threatened people.

I want to add, that all threats of death or violence and verbal abuse to fight for your side is despicable. We should discuss and resolve this stuff, not create a war. It is sad to see, that this issue is used as an excuse to spew hatred on Twitter. Whatever you think is the right stance on these issues, please abstain from such behaviour.

So, recognizing the complexity of the issues involved, what do you think?

I feel sorry for her,not saying i'm always agreeing with what she says but whatever she says is always being pulled into drama from whatever side and even when she can be a bit ignorant i do think she means well.

Ugh.  I had a whole response to this and my computer crapped out.

To sum it up, JK Rowling is presenting herself as someone who is researched and unbiased.  Yet, she's doing things like citing studies with obvious fundamental flaws in their methodology (the study she cites was conducted by surveying parents on websites with an explicit position against transitioning).  She then characterizes the backlash to this study as "a concerted campaign to discredit both her and her work" without addressing the very valid critique of the work. Now she is promoting the position that peer pressure can cause children to transition.

Essentially Rowling already had her opinion, and sought out data to cherry pick to support it.  Whether her initial position was actually correct, I don't know.  I'm not an expert on gender identity or gender dysphoria which is why I simply shut the fuck up about it beyond my personal opinion (that if someone wants to be identified a certain way I'm happy to do so which I think is simply not being an asshole).  Likewise, (while she shouldn't be threatened), JK Rowling is not an expert, and should shut the fuck about it as well.  And while she certainly has the right to express her opinion, people equally have the right to tell her to shut the fuck up.

She is a free person so she have all right to talk about this and any subject. And also she is free to not talk about something if she doesn't want (sure she can be challenged on not talking when it is a topic she usually talks about).
On the books I think she made a well done job on convey diversity on gender, race and sexual orientation. But she shouldn't give details outside the book, if it was relevant it should be inside the book. Outside the book the author shouldn't be talking about the book.

But we are also free to agree or disagree with her, but don't need to witchhunt or the like.

Yeah, she has an opinion. Thats not ok these days.

Absolutely, everyone should have the right to talk about any topic.

I think the problem happens when famous people come out about topics for which actual professionals have deepened opinions on the matter, so the problem is that a famous person leverages their fame to push their opinion and that is where it's lousy.

It would be much better to hear someone who is famous for their life's work on gender identity than to hear the writer of a children's fiction novel. Her opinion is probably just as good as ours.

Well I'm very much against giving attention to celebrities opinion in any topic. They are famous for role playing or stuff like that not in politics, economical, etc.

Nothing she says was wrong, though you can see how she had to refrain herself, because one wrong word could trigger another avalanche of activist fascism. She made a very good point about transgenderism being a social phenomenon rather than a psychological one.

Sadly transgenderism has evolved from a few people who drew the wrong conclusion from a predicament to a full on religion. I'd say cult but cults aren't so heavily protected. For me transgenderism is, like every other religion, entirely regressive and as an extremely progressive person I abhor any kind of regressiveness. Transgenderism is defeatist in nature and it's a shame that they are allowed to be called activist when all they're doing is pushing social evolution back hundreds of years and even worse, completely confirming their and everyone else's oppressors. They are a huge part of the problem that they pretend to fight against. While I do not hold a grudge against transgender people I have absolutely no respect for their supposed identification, let alone their demand for respect. I will respect you if you do whatever you want with your body, I will respect you for the way you are behaving as long as you do not hurt anyone, but I will completely lose all my respect if you are doing it while using fake labels that mean absolutely nothing.

Transgenderism isn't a psychological phenomenon, it is 100% social. Genders are a fake social construct and adhering to it has only ever brought harm to humanity's social structures. If you claim to be of a certain gender then you are part of the problem.

End note: I distinguish between gender and sex as sex being the true biology and gender being the fake construct that sadly people build their whole identities on.

I can't say I care what opinion she has. But then again I wasn't a huge fan of her books, and they didn't influence my growing up. So it's probably different for a lot of other people.

But I do think it's at least an interesting dynamic when the entire main cast of Harry Potter speak out in disagreement with her. 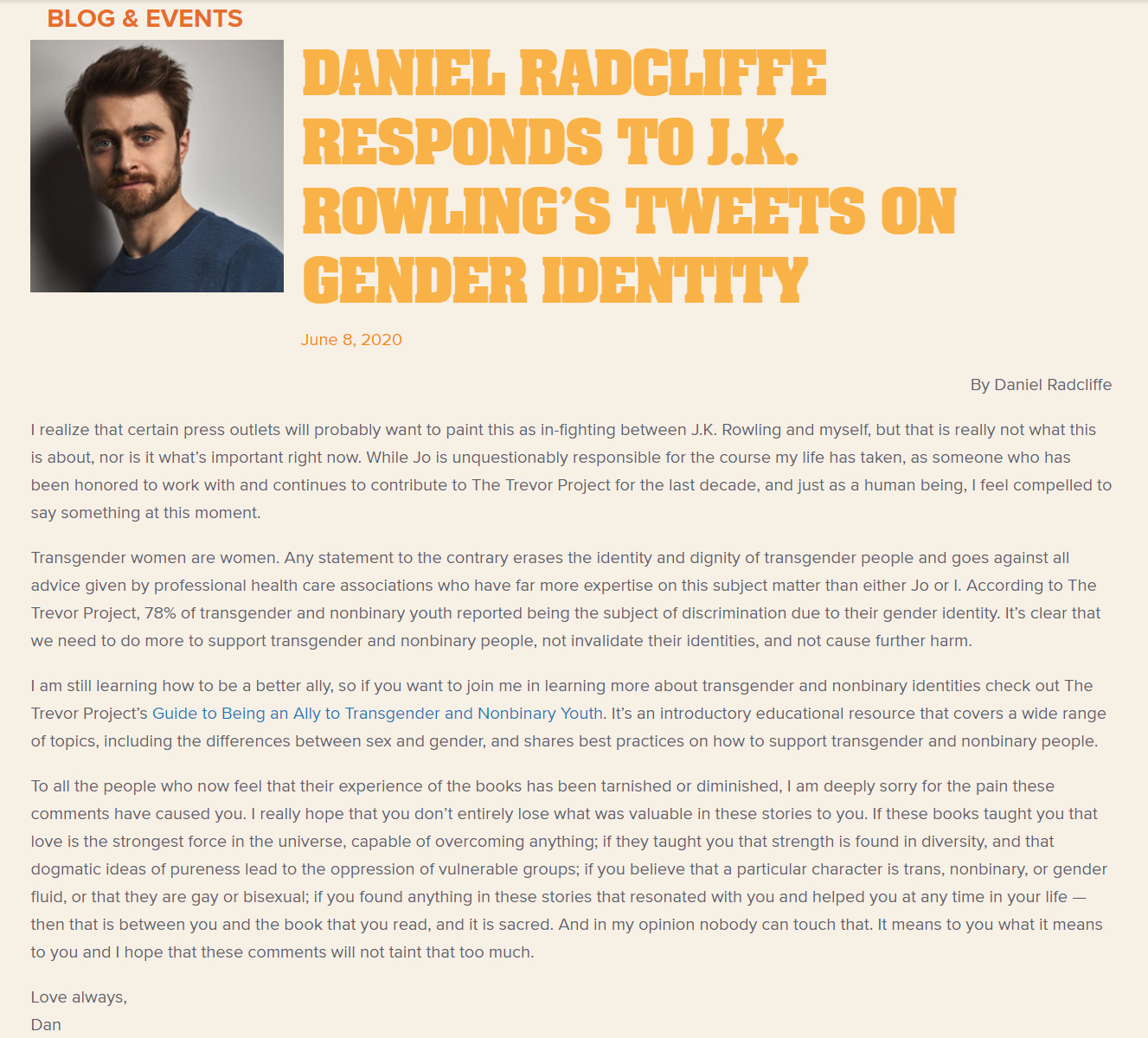 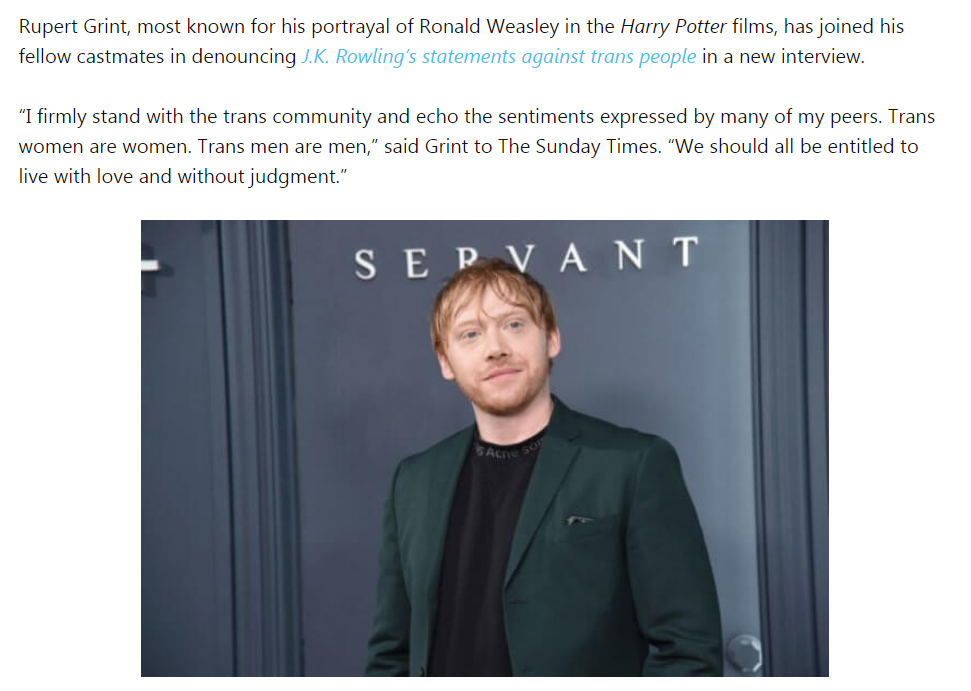 If Harry Potter was a source of love and belonging for you, that love is infinite and there to take without judgment or question. Transwomen are Women. I see and love you, Bonnie x

So, you want my thoughts on Cho Chang? Okay, here goes...(thread)

I'm sure some people in the Harry Potter community appreciated that.

Famous people like her have a bigger reach/audience than almost every other person in the world when expressing their opinions publicly, it almost always makes the news when a celebrity says "something wrong", so while yes, she has the right and freedom to voice it, she also has a bigger responsability when voicing said opinion, wether she likes it or not. And like JWeinCom says, people equally have the right to tell her to shut the fuck up. Which I do think she should.