Change for information below. If you think you have the time and would like to be President on this site, Please contact me via PM. We will get you started.

Nominations are closed until further notice. 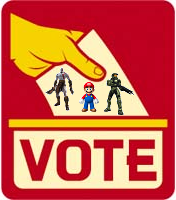 I think it is high time that Vgchartz NintendoNation has it's own President  and staff. So Nominate who you want to be President now!

Once the nominations are in, there will be a seperate thread for the voting. Good luck!

WELCOME TO THE OFFICIAL NINTENDO THREAD!

This thread can be used to talk about anything Nintendo related. Mainly though I will assume that people will want current events pertaining to Nintendo. The Wii U and 3DS especially so, since they are the biggest things going on with Nintendo right now. Nintendo has been making videogames and videogame consoles for over 30 years now! Mario, Kirby, Zelda (Link), Donkey Kong, Catpain Falcon, and many others are as easily recognizable as Tom and Jerry or Spongebob. We are not certain about what will be happening with the Wii U, but we have a clear view at this time of the short term future of the 3DS. Kid Icarus, Resident Evil, Metal Gear Solid, and even Luigi will all soon be making appearances on the 3DS. Just like in the Vita thread (which I think is a wonderful thread, and that is why I am following that format) I will be posting the daily news here on anything Nintendo. I will try to make it news that is not thread worthy, but is fun to know about anyways.

Go to link above for all of the May news post in this thread.

How to use a GC Controller on a Wii U

CNET-by Scott Stein-3 hours ago
What sort of game makes you meet people, or walk around, in order to play? These do, and they show how Nintendo is more mobile-minded ...

WhatCulture!-by Evan Tavares-8 hours ago
You might find it hard to believe, but Nintendo is actually over a hundred years old, having been founded in 1889 as a card game company.
Game and Watch at link below.
http://gamrconnect.vgchartz.com/edit-post.php?id=5555304
AUGUST
Devs leaving for 3DS, Metal Max 4, and 3rd parties enjoying nintendo help
http://gamrconnect.vgchartz.com/reply.php?id=140966

Title links for the weary traveller

That will bring you to the latest title headline, be sure to read through the rest of the last page or two pages to be up-to-date!

Tagged. I need my Nintendo news fix! I'm like a crack whore with no crack. :(

We will begin this news thread of with some Dorkly.

The hero of lightspeed.

Welcome back thread. You look slimmer!

I'm guessing the old one will never be revived? But there were so many memories... :'[

You should of renamed it to the "Official Nintendo Discussion thread" XD Anyways to welcome the new thread , two new SNES videos I uploaded!

Once the first page is past, I wanna just add the last two pages of news from the old one to my second post here. So that will be something. Plus I forgot to add the link to the old one. I will just put it in my Locked threads thread.

Oh, just because you put me in the thread title. I feel privileged

Just as an aside, what was wrong with the other thread?

One of the pages on his old one seemed to crash and blow up, killed thousands of people.

Actually Machina just locked it because of the bolded reason.