This shit is everywhere. Just when I thought Nintendo was a safe space. -_-

There’s not much details, but this seems weird.
One worker filed a complaint for what seems to be unionization, but what’s the angle with hiring firm ?
I don’t get it…

The new XB3 date announcement happening not long before this is something.

Will be interesting to see what comes of this.

It's like there needs to be reform EVERYWHERE in the games industry.

As far as I’m aware, no major video game publishing or dev office in the US allows union workers. In fact, the only major video game company I’m aware of that has unionized workers is Paradox Games (makers of Victoria 2, Crusader Kings, Cities Skylines, Stellaris, EU, and Hearts of Iron).

I’m not against pressuring Nintendo to have a unionized workforce as I feel if anyone has the ability to normalize something across the industry, it’s Nintendo. I am against demonizing Nintendo alone over an industry norm, and if it’s true that people are using it as an excuse to pirate games, report them. Software piracy is illegal, scummy, and undermines customer confidence and the industry—generally, the industry doesn’t respond positively to that kind of activity. What Nintendo does react to is social progress awareness campaigns, which is why LGBT stuff is now recognized by the dev teams.

I'm not sure if this was your intention, but this basically reads like you're letting Nintendo off the hook, and not holding them responsible because 1) some bad faith actors want to pirate their software, and 2) Nintendo will 'react' and become socially more aware.

Like, why does it matter that their devs recognise the LGBT community after other companies had already been doing so? If anything, it only shows how archaic the management is. Still, I'll acknowledge that any progress is a good thing.

Nonetheless, these are specifically the allegations: 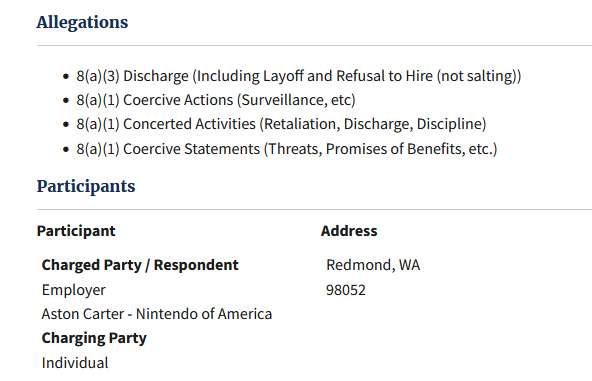 And this is a thread from someone who worked at NoA before:

Working for nintendo (contract for 3+ years) was one of the most stressful and awful experiences of my life. Coworkers were great, but I was constantly under pressure of being let go for little things like going to the bathroom or being stuck in traffic an extra 2 min b4 work. https://t.co/gbxqNfynmf

Oh so we talking unions.

Unions are useless as tits on a bull in modern society. They are more focused on taking people's membership money than actually helping people when it all get's too hard.

These are just allegations at the moment (obviously) but they would not surprise me if true. Only about 10% of American workers are unionized. There is a ton of nonunion work in the video games industry as well. I don't think any large American publisher or American branch of an foreign publisher are unionized.
Nintendo probably doesn't want unions, and instead of negotiating I'm sure they will probably try to crush them.

No company that is out there anymore will willingly accept a union anymore. So no one should be surprised that it seems Nintendo fired a employee for trying to unionize the workplace. Unionizing is a protected act and if here claims are legit, the NLRB will file charges against Nintendo. The gaming community should make it clear that union busting, captive meetings, and retaliating against unionization is not acceptable and workers rights to organize must be respected.

The employee(s) of this complaint seems to be a contract employee from my understanding. In my experience with most contract work. Companies often let these staffing firms fill and manage these contracts. So for example, you might work at Nintendo offices every day, but officially speaking, you are a contract worker (under fix time period, ie. 1,2,3 years) who is officially employed by staffing firm. Nintendo pays staffing firm to pay you, you get no Nintendo benefits, only the shitty ones the staffing firm offers. It's a terrible gig for the employee. The worst part is that companies will often give these staffing firms like 70k for salaries of the position and the staffing firm will basically find the most desperate person they can and get them to take 40k or something like that. Then profit the rest, on top of the fees they charge.

So in conclusion, they are listing both since they probably officially work for staffing firm, but work at the Nintendo office and Nintendo bosses are there supervisors.