In the old days, my favorite female character in gaming was Samus Aran because the original Metroid was the game that got me into gaming. I was young enough at the time that I didn't yet know enough about "how girls are" to be surprised by Samus turning out to be a woman. I was more caught off guard by how gaming publications I read in subsequent years characterized this as a shocking revelation. That was one of those early things that told me something was off about the world. ...Well anyway, this was all cemented for me with the release of Super Metroid in '94, which just...well I mean aside from being incredibly fun to explore and discover, deftly presented what's become among the most important things I've learned over and over again in the course of my life, which is that sometimes the very best friends come from the least expected places. Through it all, Samus was the main video game character who made me want to be brave.

These days the game character (notice I didn't use the qualifying term "female") I connect to and appreciate the most though is Ellie from the Last of Us games because I relate to so many things about her, from having lost so many loved ones before and just living with this horrible fear of being alone to being lesbian to being into punk and folk and by no means always doing the right thing to being a hunter to her dorky sense of humor (when she's able to have one), just little things like that, struggles with depression, lots of things. What makes her a strong person to me isn't just like the ability to overpower others or endure pain and suffering though, it's her ability to overcome her own seemingly insurmountable demons and grow as a person despite the cost of her many, many mistakes. That's a pretty big challenge in my own life. It means different things to different people, but to me being a feminist has always been about having the power to be my authentic self and the will to learn and to grow.

FREYA in Final Fantasy IX was a bad ass. She could kick anybody's butt in the battle. She was tough not only physically but also mentally. But inside her tough personality was a woman who was emotionally devastated, being left behind by the man she really loved. Worse, she was totally forgotten when they met again, right in their war-torn kingdom  According to her, "To be forgotten is worse than death.". Freya set aside these feelings with her mission. Freya signifies women's power.

Umm. Cpt Explosion, that Grace Walker from Wolfenstein is too OP female character, she's too toxic and much worse than Samuel Al. Jackson MF. And i liked it in weird way. lol

Aqua is a terribly written character though... like most new KH characters from BbS onwards

And even if we are only talking about badassery... while it's true that she's pretty badass in BbS and 0.2, she gets her ass kicked every single time in KH III. So... yeah.

And if we include not playable characters, also Viktoria in Thief I and II.

My pick go to Lenneth Valkyrie from the Valkyrie Profile games. 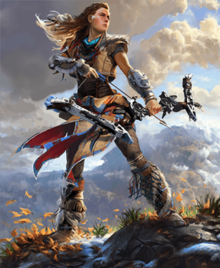 I really liked Aloy. When I saw the first trailer for Horizon, I thought she would be an annoying Katniss Everdeen (at least in the books) style protagonist, but I grew really fond of her journey and story. The ending of Horizon is one of my favorite videogame endings.

So you like her?! :P Oh yeah, Debra also starred as Cere Jundra from SW Jedi: Fallen Order. As an actress, i think she's quite awesome.