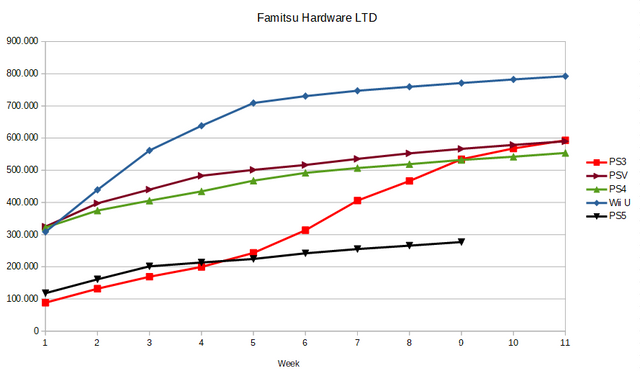 The hard road that lies ahead of the PS5.
I won't bother making a software comparison for obvious reasons.

I forgot how well the Wii U did in japan, at least for the first 3 years.

Yes, it was but Capcom is starting to change the tide with Monster Hunter Rise, Stories 2, GnG, and rumored RE in this year while SQE didn't even bother to announce a new exclusive Dragon Quest on Nintendo Switch in 2020.

Just look at the list of PS4 exclusives last year. Outside of VII Remake, Resident Evil 3, Nioh 2, and Cyberpunk 2077 all these games should have been on the Switch as well.

Bandai in particular had a huge drop in 2020 precisely because of their platform choices for MSG, DBZ:Kakarot, SAO:AL etc. They have a bunch of PS4/PS5 exclusives slated for 2021 or beyond that would have to be major hits in the West in order for them to not be in financial trouble. Also the management is blocking smaller titles from the Switch, as we've heard multiple times from some of their partners.

Sega has probably managed more sales of Football Manager on the Switch than any Sega Japan developed games. They've made zero attempts to transition Yakuza to the system for example and are continuing to invest in chasing the Western unicorn.

Square pretty much always under ships and hasn't really taken the Switch seriously, last year they should have had a Dragon Quest spin-off on the system be it Builders, Heroes or Monsters. While the DQXIS version of the PS4 is basically gone from the chart, Switch version continues to sell decently - yet Switch continues to be overlooked a very recent example was Densha de Go!! a train game launching exclusively on the PS4 this holiday period that they are porting to the Switch in March. No offense but that just shows how incompetent their strategy is.

Capcom is turning things around this year, but it's that an excuse for not launching anything new quicker on the system? They just had two years in a row where they basically subpar results compared to the type of sales they used to achieve on the 3DS.

Finally, we have Level-5 that have been an absolute shitshow and make the rest of these companies seem like geniuses, how long are deep discounts on the eShop going to keep them afloat if they continue to not launch any new games on the system. They bet against their bread-and-butter and are now in dire straits.

Good support up until 2021 - Koei Tecmo, Konami, Marvelous(mainly due to Nintendo convincing them to launch Sakuna on the Switch)

Outside of Konami, every big company has pretty much had a subpar strategy for the Switch considering that they had plenty of time to get a lot more games onto the system. There is a reason every title by Konami has surpassed 200K and they are the first Japanese 3rd Party with a multi-million-seller. Koei Tecmo is basically already being awarded for their decisions as Age of Calamity is already their best selling game of all time worldwide. Marvelous will be one of the studios that sees the most substantial growth in the coming years and wouldn't have made the list if it wasn't for Sakuna.

Here is another one.

The Wii U didn't do well in any point of its life. It couldn't even reach 3.5m lifetime in Japan.

The graph shows how poorly the four most recent PS consoles have launched, because the Wii U is by no means a measuring stick for good sales. It had a typical launch allocation of 300k units, then had its first holiday season and right afterwards it was down to lackluster sales.

Yowch, even the PS3 has rocketed ahead of it now. The PS brand is in real danger of becoming almost irrelevant in their own country in spite of the AAA support they still get by default.

Does it look "pretty well"? 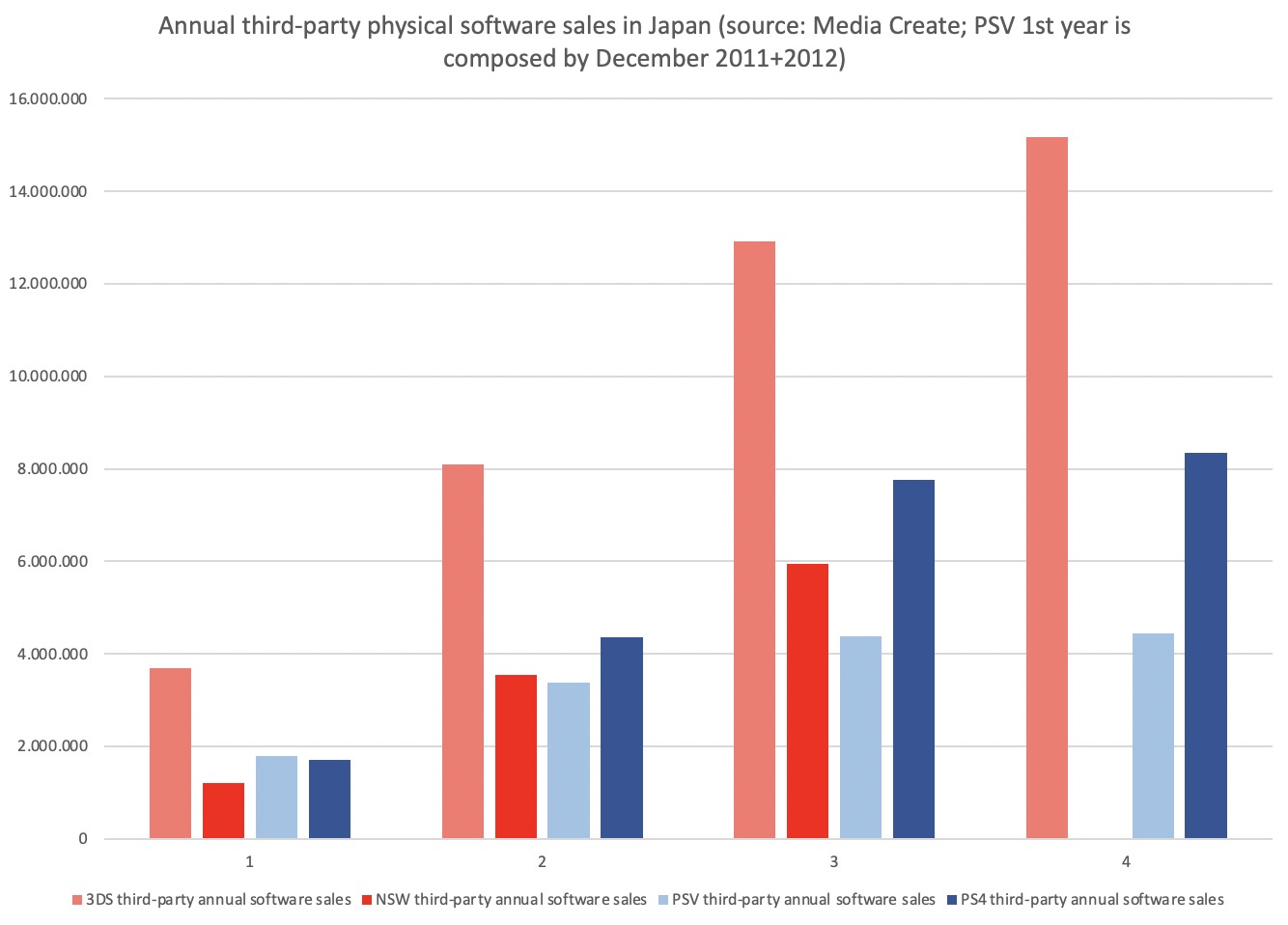 Using your own chart.

Why isn't Konami porting Momotaro to PS4 as well? Just like MH to Switch it could be free sales for Konami. Why isn't Koei Tecmo or Sega making exclusive Warriors/ Olympic games for PS4? Why isn't Fishing Spirits for PS4 as well? Why isn't Taiko no Tastujin on PS4? Why was DQXI S exclusive for so long?

Unlike the power difference, 3rd parties have no excuse. But I suppose using outdated graphics on the PS4 might turn off some users, but Switch owners don't seem to mind so I am sure there are plenty on PS4 as well.

Why isn't Sakuna on PS4? I don't see it in the top 30 so it doesn't exist. If it existed it would probably sell about the same to slightly more than the Switch version (like PS4/NSW multiplats ALWAYS do).