Firstly, nobody is forcing anyone to make a cake. You have the option of not being a baker. If you are a baker, you can be reasonably sure that something you bake will be enjoyed at some kind of occasion you do not approve of. Keep in mind, that the cake being ordered was a completely normal wedding cake, that did not have any special pro gay message or anything. Now, if a baker was questioning every person they gave a cake to about the nature of their party, and then morally evaluating each one, there'd be a slightly better case. You can be a baker that only caters to a narrow clientele. But, if you're going to put yourself out there as a business that serves the public, there are responsibilities that kick in. It's not like forcing a Jewish person to eat pork. It's like requiring a Jewish person who applied for a job at McDonalds to serve customers cheeseburgers. (There is also specific commandment against eating non-kosher foods, and not one against selling cakes to people who are celebrating things you don't like, so even on purely scriptural grounds that's a pretty weak comparison).

It seems to me what you're saying that if a belief is part of an "established" religion, then it is a sufficient ground for discrimination. And this is in absolute direct conflict with the first amendment. Saying that a religious belief that is somehow justified by a holy book is a valid basis for discrimination, while a religious belief that is completely sincere but not based on a holy book is not a valid basis is establishing scriptural religions above all others.

Presumably, you are also referring to mainstream religions, and if a guy in 1960 wrote a book about what God commands and I read and completely believed in it, that would not meet your standards... So, you do not have freedom to practice religions, just freedom to practice specific government endorsed religions. That's a big no-no.

And there is also a huge problem of interpretation. There are verses as you said that can be interpreted as against interracial marriage. If one sincerely believes that is the position the bible supports, then can a court tell them they're wrong? Should the courts be in the business of determining acceptable interpretations of scripture? As a religious person, I'd assume you would not want that.

If you are arguing that there should be a specific religious exemption for bakers the ONLY rational test there could be is whether the exempted person sincerely believes in the reason they're giving. Any other kind of test puts the government in the position of deeming what religious views are acceptable and which are not, which is the exact thing the first amendment is supposed to prevent.

Moreover, I don't understand why it should matter at all whether the belief is based in religion or not. If I can not discriminate against gay people because I think what they're doing is immoral, why does it become ok to do so because I think that god thinks its immoral? Why is it ok to "force" me to do something only if I can't point to a holy book or divine being that says it's not ok?

If people can refuse service, then the only possible logically consistent standard can be that they can refuse service when performing that service would violate their sincerely held moral beliefs. This would effectively legalize any kind of racism or discrimination. But, if you want to give that right to the Christian bakers, you have to give it to everyone.

Alternatively of course, you can hold that discrimination against certain protected classes is prohibited regardless of personal beliefs. A much better standard. The risk of someone having to sell a cake that will be eaten at an event they disapprove of is far less than the risk of discrimination which history tells us will occur if allowed.

Lastly, it's odd that both of your examples of understanding involve the gay couple "understanding" the baker's position. It also assumes there are plenty of bakers around, which may not be the case in all areas. And, if this applies to wedding cakes, it could easily apply in various other contexts. For instance, jobs, where denial on the basis of gender/orientation could be devastating. The reason we have the laws we do is because of our history with segregation and the damage that caused. A religious basis doesn't change the potential harm.

The sad truth is that the first amendment is often weaponized by orthodox Christians, and politicians looking to court Christian voters, to give Christians a right that would otherwise not exist: the right to publicly discriminate against people they do not like. Those of more moderate faith are less inclined to care, as they are a part of the majority religion, and thus not directly affected, and in their majority, Christians wield an unmatched political and legal advantage to abuse this as much as possible.

The supporters of this right of discrimination often claim "we would support this if it were any other religion", which is a bold-faced lie. And they go so far as to cry retaliation when people choose to not do business with them over their track record of discrimination. See Fulton vs City of Philadelphia, where Philadelphia stopped referring foster children to a Catholic agency after repeat violations of the city's anti-discrimination laws. The Catholic agency sued claiming their first amendment rights were violated. What about the rights of the potential parents who were discriminated against? Couldn't they have sued the city for doing business with agencies knowingly violating the anti-discrimination laws?

The First amendment protects your private practice of your religion from being persecuted by the government. It does not protect you in a public space. Otherwise we are distinguishing a class-based system where you are either a mainstream Christian, or you are not.

On topic, I am inclined to agree with consensus that the survey's questions are kind of loaded. While surveys like this do need extreme questions to set a baseline, there too many of the extreme questions, and even some of the more moderate ones were worded in a way to try to evoke a specific knee-jerk response.

That being said, I am a little surprised by my result.  I am more centrist, probably closer to the green indicator in all aspects, except maybe "culture war".  But that is the nuance that gets lost when the questions are designed to put you in one of two extreme buckets.

Yeah, the quiz is presumptous and US centric.
Reduce the military spending bill? Not every country spends 47656735534 trillion per second on the military.
Some questions I felt didn't have an apprpriate answer because it didn't accont for other relevant factors, etc.

Anyway, while I take the accuracy of any online quiz with a huge grain of salt, I got these results.
Similar to a lot of ppl it seems. 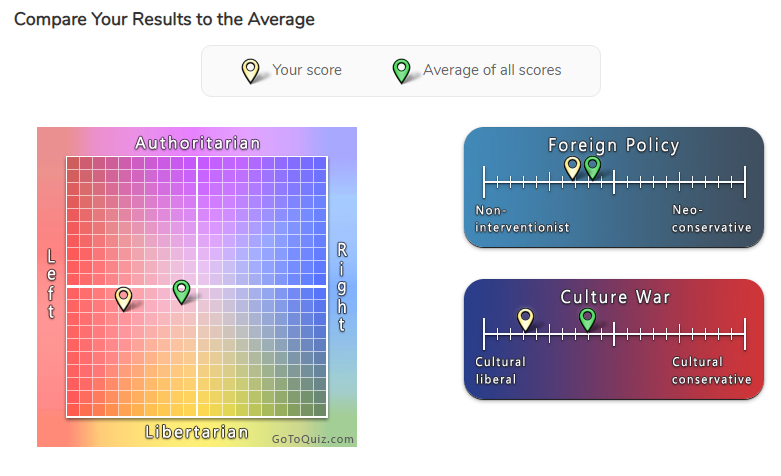 Kinda seems a lot of people got similar results to mine.

As others have pointed out this felt very directed at americans, so I had a lot of neutral stances or several issues I had strong opinions about I marked as not mattering that much since they are non issues to me.

The idea that the media needs to be "balanced" is I feel an indirectly destructive one.

Lies don't deserve to be given the same coverage and respect as the truth.

Ignorance doesn't deserve to be given the same coverage and respect as expertise.

Free-market capitalists, for one.

Last edited by SuaveSocialist - on 04 January 2021

There's a question in the quiz that asked about working non-citizens.
I think some ppl jump to the conclusion that a non-citizen = illegal immigrant.
But that's not the case. Whether they are awaiting sitizenship (which can take many years), on a working visa, etc.