As far as social issues go, I'm mainly a conservative there because I am strongly against abortion. LGBT issues wise, I'd say I'm fairly neutral, I'm ok with LGBT marriage and think that attacks on LGBT people are not ok, but I'm also not fan of how some of the LGBT community here in the US at least want to be able to force conservative churches to allow their weddings there, or force conservative owned cake shops to make their wedding cakes for instance (which was a big supreme court case several years back), when there are plenty of trans friendly businesses and churches they can go to instead. Also not a big fan of allowing trans women to compete against biological women in sports, trans women simply have an easier time packing on muscle which gives them an unfair advantage over biological women in most sports.

Border issues wise, I'm also not a big fan of illegal immigration. It's a pretty big issue here in the US, and I'm definitely in favor of tighter border security on the Mexican border. I feel for the plight of those trying to escape their countries, I would want to get out of a craphole country if I lived in one, but I just can't support illegal immigration into the US, it's not fair to taxpaying US citizens since many illegals manage to avoid paying several taxes, and it's especially not fair to those who immigrate legally, working their butts off to pass the exams and such. And like you said, it is often dangerous, and they often risk the lives of their children attempting to do it too.

As far as more fiscal type issues go: I prefer low taxes, prefer capitalism over socialism, but I do see the need for universal healthcare more and more as time goes on. I support a living minimum wage, and I think that most countries need to be doing more to move towards clean energy than they are currently doing, but I also don't think we should go totally overboard and charge massive tax rates just to fund a quick conversion to clean energy. I think that we need a proper retirement system that isn't based so heavily on somebody playing the stock market with your retirement money. I'm not a fan of allowing corporations to grow too large, nor am I a fan of corporations holding so much sway over politicians through sizeable campaign donations.

I believe if the Church/Business is happy to make cakes and perform weddings for regular civil marriages and thus not restrict themselves to ONLY religious ceremonies... Then that should extend to LGBTQI marriages. Otherwise they are simply being bigoted by *only* excluding the LGBTQI community and not Civil partnerships or other religions.

If the Church/Business is only going to offer it's services to their respective faith and exclude all other faiths, then sure, that exclusion should extend to LGBTQI people.

Then again, I also believe we should tax the Church and remove religion entirely from the educational system outside of history.

As for trans individuals being in sports, I agree, there are some biological advantages for those individuals.
I think some changes need to be made on that front to be more accommodating to those individuals, obviously they are striving to succeed and follow their passion, so we should enable that rather than simply shut it down.

Is anybody pro illegal immigration?

Very US centric. Is there even any other country which even just considers teaching intelligent design in schools?

In any case, here's my results:

Probably not. I mean, I had to google it to even find out what it was

Yeah kind of weird questions for a non-American. Also, the result is wrong due to the different interpretation in ‘left’ and ‘right’ between my country and where this quiz comes from. I’d be considered moderately rightwing in The Netherlands, and I’ve also always voted as such.

I always find these quizzes interesting. 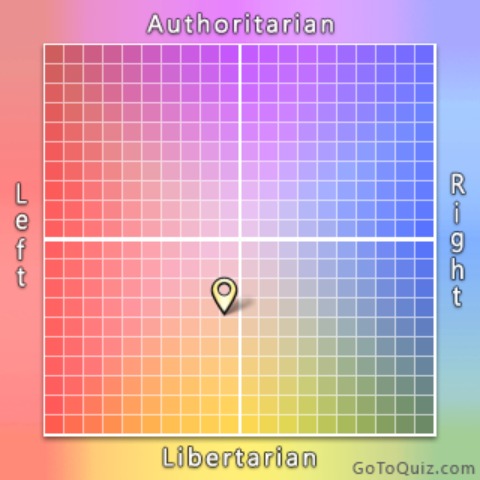