Switch was already gaining ground on the PS4, even before COVID hit.  Taking the past year into account, I think it's becoming obvious Switch is going to win this one.  This is another scenario of the Switch being close at first but eventually taking off and leaving the other system in the dust.  It may not be quite as dramatic as the Switch vs. 3DS chart, but the outcome is basically the same.  Switch started strong and steady, but then it's sales really took off making the early years seem slow by comparison.

This was a very interesting month for this gap chart. Looking at a month aligned comparison (basically comparing the fourth november for the NS and for the PS4), this was the first time since last november that the PS4 was able to outsell the NS in a month.

Next month should go back to nintendo as the PS4 sold 3.9 million units and nintendo already sold 1.3 in it's first of five weeks. I wonder what games came out that holiday season or what deals became available to see such a great growth for the PS4.

The month aligned chart after 45 months of release for the NS shows the NS with quite a lead, and like I said, december should bump this lead really high for the NS.

These past 10 months have been brutal for this chart. But the PS4 did manage to win this month.

Gonna be nuts to see how far the Switch is ahead of PS4 once December's sales are in. 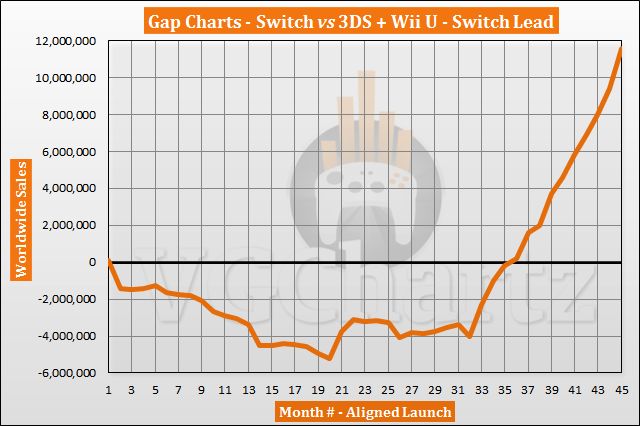 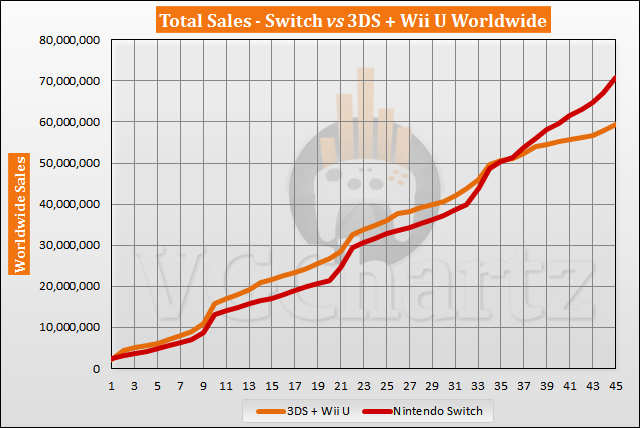 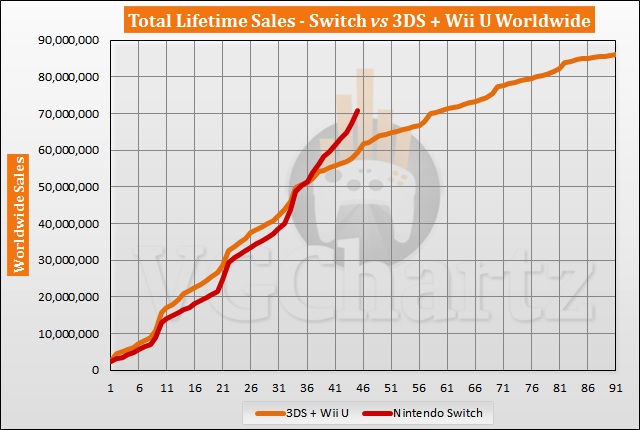 @trunkswd What month and year do you think the Switch will surpass the WiiU+3DS? I think it will happen in october 2021.

If sales are relatively flat year-on-year in 2021 the Switch will surpass the 3DS and Wii U at the end of August or early September. However, I expect sales to be down a bit starting in March, so the end of September or early October I see as the most likely.

I hope the Switch vs 3DS + Wii U charts continues until the Switch wins, just so we can see how quickly it passes what took its combined predecessors nearly a decade to reach.

Last edited by HigHurtenflurst - on 22 December 2020

Hi @HigHurtenflurst I actually changed to include any week with 4+ days to count for that month. I was told that this is the way VGChartz counts it, therefore this december will have 5 weeks instead of 4, Is that correct?

This would make the switch gain november back. What is the correct way of analyzing this? Thanks for pointing this out.

Neither is correct, as long as you are consistant.

If you are looking at comparing months to historical months it might be best to do what NPD does, always have months with the same number of weeks where possible (I think last month of every quarter is 5 weeks, then every few years they have to have January as 5 weeks as well to reset it)