Forums - Sony Discussion - The Last of Us Part II Wins Game of the Year!

Lol, funny how a certain group of people can't handle legit criticism, so have no alternative but to label those who offer it as blind haters and bigots. Same old strategy. 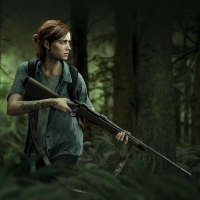 The Last of Us Part II isn't just my favorite game of 2020, it's more like one of my favorite games ever. The reasons are too numerous to even list here, of which its technical merits really are the least. I love this game for most of the same reasons that so many others despise it: because it's bold and daring, because it's nuanced and complicated and lacks clear heroes and villains, because it makes you rethink your prejudices perhaps developed from experience with the first game, because it's got lesbian love and family life as significant narrative elements (deal with it!), because they allowed Ellie to be broken by her life and her loss instead of having to be "likable", because they didn't water down the brutality of war and vengeance so people wouldn't be depressed by it, and because a game uncompromisingly addressing the topics of hatred, forgiveness, the pain of loss and the struggle to accept it and move on by finding those things in life that are good and haven't been lost (amidst a pandemic no less) just seems the timeliest, most socially relevant game there is right now at this moment of tremendous pain, anguish, loss, and anger in the world. These are the sorts of the reasons TLOU2 has proven the most controversial video game ever released, and also why I'm very glad that the Game Awards didn't take said controversy as their cue to make a less deserving choice for their Game of the Year award.

This isn't just a victory for this particular game, it's a victory for art. I think the best art is challenging! I mean, as I've discussed at some length here before, I don't agree with every suggestion of this game's story myself and I have my own favorite characters and ones I connect to more than others, but that's part of what I mean about it! During the Great Depression, people generally preferred to watch musicals about affluence that bore no resemblance to their real lives. Mindless, escapist, happy entertainment. In 2020, gamers play Animal Crossing: New Horizons because it has nothing whatsoever to do with their realities because the realities of the world are painful ones. 2020 sucks and we all know it. The best art does not settle for what makes consumers feel comfortable amidst their pain, but rather helps them get to the bottom of it, find its roots and dig them up. This is a victory for that -- for art that challenges rather than just appeases. It's a victory for games that want to help you up, not just help you out.

Nice, one of the best VG franchises. Congrats!

yeah, i respect Geoff keighley even more now. I honestly thought he was going to cave into the pressure of all the backlash from the toxic haters and controversy, and give the game award to ghost of tsushima. Now that i think about it, maybe they gave the choice awards to Tsushima intentionally just to ease the backlash from the haters.

Deserved. It had its ups and downs but when those credits rolled, I had feelings I don't think I've ever had from a video game.

Nobody said there haven't been people who just hated the game because lesbians and jacked women. They are definetly there and they are filthy scum whose opinion don't deserve to be acknowledged.

However, and that's what the other user was trying to say is that reducing the criticism the game got to just bigotry and hating it's turning a blind eye to both legit criticism and the weak points the game may have. Because yes: there are people who just didn't like the game and they offered valid arguments for it. And instead of accepting that, fans of TLoU decided to just ignore the complaints and put those people in the same bag as the biggots.

And I appreciate your kind words. I wish debates on forums were always like this...

Really? Is this what you feel that for example I have done here? Or anywhere? Because back when you scored this game a 7 out of 10, I thought we had a pretty healthy and productive discussion about that in the comments. (Your exact words at the time were: "You (& others) have helped contribute to my most rewarding comment sections yet.") And that I've gone into a good amount of detail about what I've liked and not liked about The Last of Us Part II time and time again.

Knowing what it is to be labeled unfairly, I try to avoid the practice and don't recall labeling you. But look, though I have sought to practice restraint and consideration as the rule, even I too have been known to broad-brush opponents of this game before because I too have feelings and am not perfect. Here's an example from back on June 12th, a week before TLOU2's release, where I complained about seeing hundreds of comments on IGN attacking TLOU2 by disparaging women in general and lesbians in particular. Well I am one of those and you might not believe this but that stuff, in large enough volumes, purveyed on a sufficiently sustained basis, can be hurtful! Shit gets to me too sometimes. (Incidentally, my work shift that day was 12 hours, which is not an uncommon shift length for me, and for which I don't exactly make $100,000 a year or get any decision-making power in the company I work for.)

I still see this kind of bullshit all the time even now! Just the other night I was checking out the Open Roads announcement trailer on YouTube and the first comment posted there was a remark about how it "Looks like one of those lesbian games lol", which had the second most up-votes on the thread. (The women portrayed in said trailer were mother and daughter.) And the first reply to that comment was like "Last of Us 2...hopefully not", which was also up-voted. So I mean I don't even have to be looking at anything related to this game to find this misogynist shit following me around all across the game-o-sphere in a way that's specifically attached to this game.

So I mean I'm sorry if you feel unfairly labeled by somebody here. Perhaps if the well had not been poisoned right off the bat by an unprecedented wave of review bombings, leaks, death threats against the developers (and against many fans, I might add), and wave after wave of specific attacks on lesbianism itself, gender-nonconforming women, women in general, Jewish people for being Jewish, etc. etc. etc., it would be easier for many to avoid comparatively soft broad-brushing labels (e.g. "haters") in the face of being merely labeled say a cunt, a bitch, a whore, a cuck, a man-hater, a beta, a kike, or if one is feeling nice then maybe just an sjw. I'll try harder to mentally separate actual game-related critiques from critiques of me as a person in the future. I just don't see why you take critiques of "haters" as a critique of you if you aren't one.

People still arguing about this thing? I love this game to death and even I dont have the energy to care about it so much 6 months later...