Current gen is just as much limited by 5400 rpm HDD as last gen. There was zero improvement in random access speed. So yep, we mostly got bells and whistles this gen, but still some actual game play improvements thanks to ram increase (see my previous post).

Developers could have been preparing for next gen for years already by making game engines optimized for SSD. PCs have those for years but developers won't restrict their games to only be run from the fastest SSDs. (Unless your Star Citizen)

I'm starting to think gamers play games because of a lack of imagination lol. Leaving HDDs behind is a god send for game design, yet all I hear people come up with is scale able graphics, native 4K 60/120 FPS, ray tracing. What does that have to do with game play. (Well ray tracing offers some game play opportunities with reflections and light. 4K 120 FPS, not so much)

No one is denying the advancements in technology. Advance and new tech is always a great thing to have however you don't need super fast SSDs to make great games.

I believe you have it the other way around, imagination comes from developers not hardware, as i mention before, its up to the developers if they believe there games requires tech advancements. Everyone is talking about next gen and the improvements in AI due to the CPU increase in the Series X and PS5.. yet AI wasn't an issue on the N64 which has games running better AI than whats running on CPUs light years ahead of its time. It falls on the developers and there investment into there own game designs.

It also doesn't matter how many devs utilize the new hardware, gamers will still be flocking to games like Fortnite and Minecraft and the next big thing etc. If some games need advancements in tech to be made, than that's why we have games like Crysis and Star Citizen, however a game like Command & Conquer Remaster does not need a super fast SSD to be fun. In fact the new Age of Empires 4 game due out soon is the same.

I brought a PC because i wanted to play the current games better, not crossing my fingers hoping games use my hardware to create new ideas. I just enjoy playing games especially older games like Half Life 1 with more graphic options, i don't need them to redesign the entire thing to remove corridors in my games. If the game is fun than it doesn't matter to me.

So TLOU2 is a first-person-shooter now?

You are mixing up game design with technical abilities.

In HL2 you are fighting the enemies straight on with a crowbar or a gun  instead of hiding in the grass like a rat.

You didn't hide behind walls like that coward Marcus Fenix either.

Nevertheless even back then lighting and staying in shadows was possible in sneaking games like Splinter Cell or Thief: Deadly Shadows... and it worked fine even on an Original Xbox.

These are the requirements for Infinifactory: 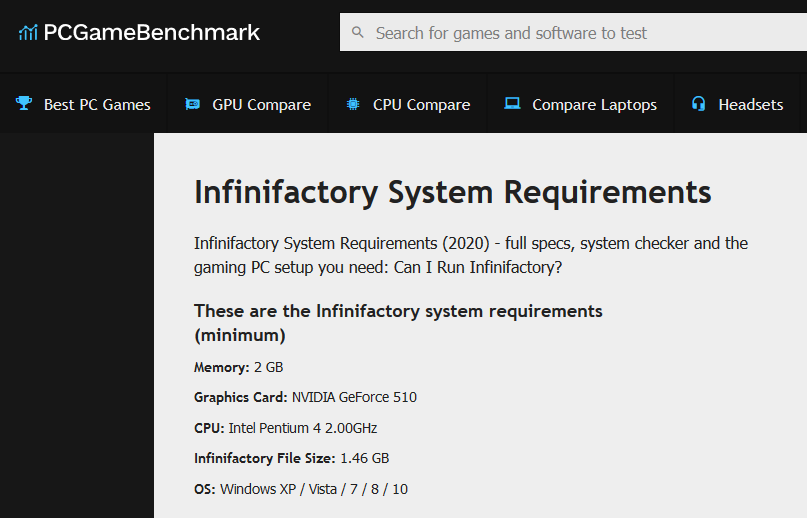 Impossible on PS3 with reduced graphics compared to PS4? I don't think so.

Totally agree. 4k and 120fps Might sound amazing but once we see games that are going for an actual generational leap at 1440p/30fps, playing current gen games at 120fps will look pretty boring in comparison. That's why nobody got excited about seeing something like Dirt 5.

It's strange that a lot of people don't seem to realize that you can take any 30fps current gen game, boost the framerate to 120fps and you're pretty much maxing out these next gen consoles already.

Age of Empires 4 can benefit greatly from SSD. No memory limits to building / alterations. 200 player battle royale on a Earth size map. Near instant jump to any part of the map loading in the needed detail. Cloud computing to keep track of everyone's armies. Instead we'll probably just get AoE 2 with better graphics.

It's good for you you enjoy older games at higher res or the same old game play in higher fidelity. I love new experiences, hence only playing VR for well over a year.

You can always keep buying a PC to enjoy games at higher res/fps. But wouldn't it be nice to have new games unlocked from the constraints of slow HDDs. And traditional games will continue to be made. Heck we're practically drowning in retro games nowadays. And I greatly enjoyed streets of rage 4 as well. However, variety is the spice of life. New experiences is what keeps me interested in gaming. If it wasn't for VR, this gen would have been rather mediocre.

The ps3 had 512 MB of ram, only half of that available for working system RAM. And as I said, it's already chugging along on ps4 pro in the later levels. Plus I don't see a Switch version.

You honestly believe PS3 can do this?


(Two different versions of the same puzzle, complete freedom in how to approach it)

In the last gen mandatory HDD installs were the exception, not the rule.

Most Xbox 360 and PS3 games had to load most of the data from the optical disc (DVD or Blu-ray):

The PS3 had a 2x Blu-ray drive, so sequential max. speed 8.6 MB/s with abysmal seeking speeds compared to 5400 rpm HDD.

Moving a few hundred simple geometric objects on simple paths? Why shouldn't the PS3 be able to do that?

It handled much more complex games. It also handled games like GTA V and TLoU with its 512 MB RAM.

And that game would be a good fit for the Switch... wouldn't surprise me if it gets ported next year.

You are just talking about a graphics bump. The only next gen PS5 game I saw from a design perspective was Ratchet. The rest are all just a graphics bump. Series X can do that too even if they are cross gen. And it’s 20% stronger so that should help compensate.

Perhaps wait till the 23rd to see what games are falling outside the cross gen window.

Well that’s your narrative. I say Ps5 is holding back progress because the specs won’t allow for it. If Series X can hit any combination of 4K and 60fps AND provide a next gen graphics bump then that’s clear to me who’s actually trying to be next gen. Remember it’s 20% stronger so everything helps.
As much as 30% when PS5 isn’t overclocking. Remember Series X is built to be consistent all the time.

It’s funny it should be like 2013 except I’m the smug PS fan who’s bragging about 1080p and you are supposed to be the Xbox guy being defensive saying 900p isn’t so bad. I am genuinely amazed the narrative is able to change to “1440p/30 FPS is next gen so long as I get my graphics bump”.

Hopefully the July show will help shift the narrative back to where it belongs because I know MS can do both. They can hit benchmarks and make their games look great. Because they have the hardware to do it, not using their PR and fans to justify lower expectations.