Forums - Gaming Discussion - Watch Out for The Last of US 2 Ultra Massive story and ending Video leaked on Internet by former ND employee on Internet. Don't trust anything when it come TLOU2 words and letter on Internet

~Knowledge based on spoiler info edited out~

I wonder if this game could have branching paths? Characters live/die based on decisions made.

~Knowledge based on spoiler info edited out~

If the rumor of a pissed ex employee is true, then it all fits the context of the overall game theme on revenge and and how it ruins lives....Fitting

Oooooooh. That would be sweet Irony.

I don't know why you didn't just limit it to PM's. 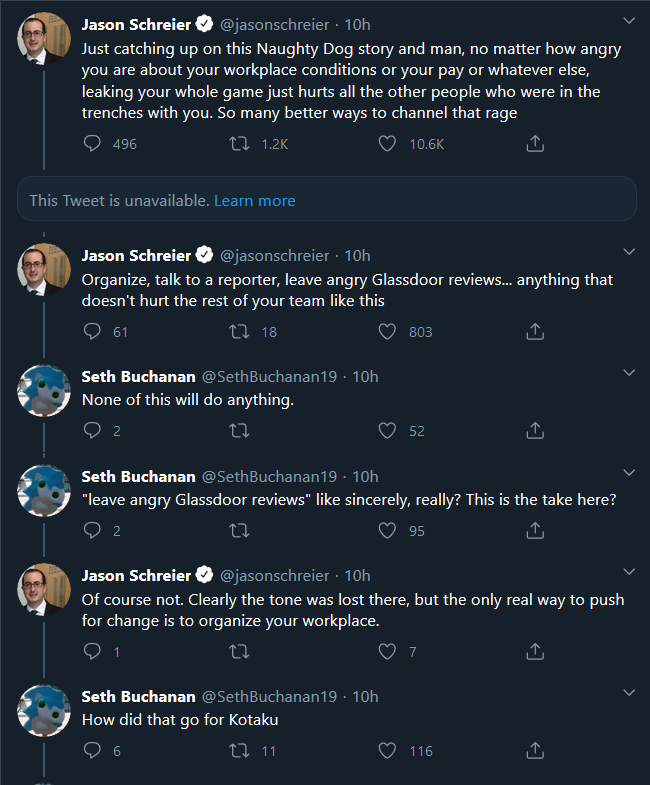 Well I've honestly bounced between both sides of this argument today. When I first started reading these things about some leaks and a disgruntled employee, all I saw mentioned in these threads was that he was upset about crunch or being fired. The only opinion I had was regardless of the work conditions and whether he just wanted to hurt ND, it was a blatantly immature act that just hurts everyone including fans and his future career.

I recently however read a snippet from an interview that actually gave a very different angle. I can't post it here because it contains spoilers, but I'll quote the safe bits of the article:

“I don’t doubt, even for a moment, that this leak came from the studio. The Last of Us Part 2 is very divisive and, as you can imagine, some of the team aren’t really thrilled to be working on the game.”

The source goes on to talk about how stale the work environment has been at Naughty Dog and how so many people have had to bite their tongues because ‘cancel culture’ is very much alive inside of the studio.

“The team is very much divided on the game, and even voicing your concerns on its story will upset certain individuals; it usually results in said person being called closed-minded or even phobic, or some such nonsense. Some people literally have to bite their tongues or fear losing their jobs, even careers, to an outrage mob.”

Our source also alleged that the high turnover in staff is because of the reasons mentioned above. “What’s really sad is that nobody is allowed to talk about any of this. Many employees have left Naughty Dog because in-house politics and they are under a strict NDA and absolutely cannot discuss the studio’s ‘productions practices’ secrets. Oops!”

Naughty Dog Inc., has a turnover rate of 70% which skyrocketed around the time The Last of Us Part II went into production. Our source’s claims have been corroborated by a former Naughty Dog animator, Jonathon Cooper, who left them in early October last year.

A source added: “It was primarily the senior team that left Naughty Dog and to assume that it’s because of ‘long working hours’ is laughable. Anybody that has ever worked in game development knows that this is crock of shit. Since I can remember, development has always been like this; get to work, chug coffee and don’t leave until you’ve completed the task that you’ve been assigned for the day. It’s a part of the fun. It’s a part of the lifestyle. What’s not fun is working in a toxic environment.”

Very interesting to see a whole different perspective. While at first it was easy to question why a disgruntled employee would launch a kamikaze attack just to get back at his employer, it becomes very different if we instead look at the angle of, maybe his career was already in danger. Maybe instead of just trying to take one last shot at an employer, he was actually trying to shed some light on a toxic situation?

So far this is just some vague allegations, containing a lot of common buzzwords, from some unnamed sources, but the one thing I could say lends this any credibility is how divisive reactions to the leaks have been. Honestly, that might be underselling it, because most of what I've seen has been very negative.

Interesting, I will do some research on it. It probably has something to do with Drunkman pushing his agenda into the games.

Seeing that many people are cancelling the game because they didn't like the way the story will move forward, I wonder if some people may consider the leak a good thing. After all, isn't it better to get the bad news early and save yourself money and time than paying and playing a game you won't like in the end?