We know to little to say xbox will close the lead. I honestly see the gap grow as they are making the need of an Xbox obsolete. I still think it all depends on the games. Price, power and what not will be secondary.

Even though I can see where you are coming from, I hav to disagree. Sure, brand recognition and accumulated goodwill do wonders for companys. But how did they get there, if it wasn't for the production of quality products.

But there is also the other side of this: when you are top dog, you still have to present top quality products. The expectations are way higher. Say Rockstar comes out with GTA 6, but it is as good as Days Gone (which I think is an alright game). People would not take it well at all. BendStudio is not THE AAA studio, it is actually quite obscure in comparison to Rockstar, so reception was better. But still not great, since people come to expect more from Sony first party.

That is, because contrary to what you said, I think Microsoft first party can get away with less, since the expectations are less and people are more eager for something and will more easily settle for good enough.

Also also, we don't know if "Sony barely has to try", since their output of exlusives is quite fantastic and I think they really try hard. In my estimation people would be quick to word their dissatisfaction if Sony barely tried, with a resulting dip in quality and quantity of exclusives and less consoles sold. 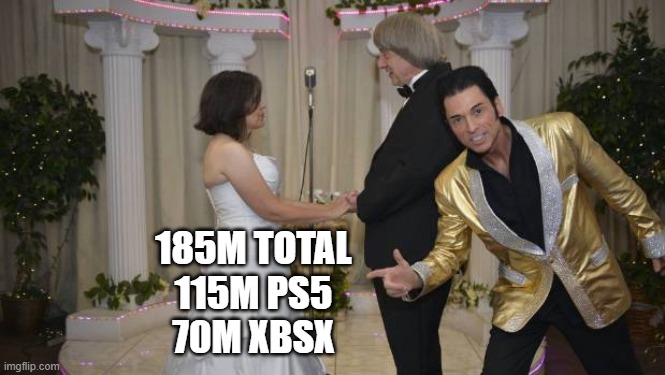 A lot of people are posting about the series X winning US/UK. I'm curious why?

TLOU is bigger then Halo this decade and playstation just had a huge hardware sale week with FFVII. I see Xbox Performing better then it did this gen, but there is nothing from them which I see tipping the edge to them winning. It can definitely happen but just at the moment I haven't seen what will cause it.

I suppose it’s subjective. For me the PS3 vs 360 gen will always be history that will keep on teaching decades later. Xbox made considerable effort to cater to Japan from 2006-2009 yet was met with indifference. Their output of exclusives surpassed Ps3 until 2008 yet the sales did not reflect that. The 2007 house market collapse and RROD didn’t help though.

Where as Ps3 coasted on pure brand power until MGS4 in mid 2008. If any other console had that $599 price point and so-so exclusives for the first 2 years....it would have been a Sega Saturn scenario. Europe and Japan kept Sony afloat until the console got its act together.

So while exclusives have their place, pre existing brand power makes the start position different for everyone. By no means are Series X and PS5 launching as equals. Which again, is good for me because MS has to try a lot harder to impress.

You have Halo/Gears/Forza which pushes Xbox and Uncharted/TLOU/GOW etc for Playstation. And other games exclusive for other regions (MH etc). It just doesn't push his narrative, so I wouldn't delve much into it.

It obviously has a big impact on sales. In the UK "word of mouth" goes around hyping certain games even if they aren't reviewed that well. My prediction this upcoming generation will trend like current gen. 105m PS5 / 42m Xbox SX

Still a lot of variables until we see proper console reveals. It would be nice to see the thread like this closer to launch just to compare the results. But I feel like both consoles will sell less than their predecessors at this point because Switch and PC will eat some next-gen PS/Xbox marketshare I think.

People stating that the games are the most important factor; yeah that's pretty obvious. I would say the price is a close second in terms of importance; if not just as important, at least in the first year or two of a consoles life cycle. Especially since the vast majority of games during that first year or two are going to be cross-gen games.

Anyway, like the title of this thread states, this is just for early predictions. As more info comes out about what games are launching with the consoles, price, etc... more informed predictions can be made.

The main takeaway here is where is MS biggest market? That's NA, where they have managed to amass around 25M XB1 sales to the PS4s 31M. So let's say Xbox matches PS5 in sales in NA, or hell lets even say they outsell the PS5 there by 5M consoles. What about EU, Japan, and ROW which accounts for over 80M of the PS4s total sales and only around what? 30M of the XB1 sales?

Even if in all those other areas MS manages to eke out 20M more sales and lets even say that comes at the expense of the PS5 sales, that's still sony having like 40-50M more sales than the Xbox.

And mind you, for any of this to seem fair, I am making a lot of worst-case assumptions for the PS5. Simply put, MS needs a shit lot of things to go wrong for the PS5.

On a plus side, MS probably knows this, and would probably be very ok with getting around 50-60M in sales. Which in all honesty isn't bad in its own right; stuff like that only looks bad when your direct competitor is pulling in 100M type numbers.