The current advice here is to where one in places where social distancing is a challenge. Like you said, public transport, crowded stores. No talking and breathing through your nose also reduces the spread as much as a face mask would. The smallest aerosol particles get through the mask anyway (and can survive up to 4 hours drifting around in the air). But you need more exposure than a couple particles for the infection to have a chance to take hold. It's a numbers game hence the 2 meter distance. The more chance the virus has to disperse in the air the less dangerous it gets. However if it keeps recirculating through air conditioning in a confined space, risk of infection goes up.

And then you have to be careful with lunatics around. They caught a guy here at Walmart, opening shampoo bottles and spitting in each one of them, then putting them back on the shelf. They took all the shampoo off. (The virus probably dies in the shampoo anyway, but really, some people...) Hence I'm not taking any chances with stuff coming in the house either.

Always good to wash your hands again after handling anything coming from outside, taken back home etc. Plastic 3 to 7 days....

Yes we had few cases of people coughing on food in grocery stores. Those people are sick. One lady did like 30k in damage because they had to throw out all the meat, fruits and vegetables.

Something is wrong with people like that. Hopefully they put her in debt for 35k and make her pay. Some jail or prison time wouldn't be bad idea either.

Canada is also putting police reforms and de-arming (of the police) higher on the agenda again amid ongoing protests.

For some, the protests erupting in reaction to the deaths of George Floyd and Regis Korchinski-Paquet have been a distraction from the COVID-19 pandemic. But Black health leaders say these two crises are connected by the same deep-rooted ill: anti-Black racism.

Researchers, advocates and racialized communities have long recognized racism as being harmful to human health. But there are now calls from multiple groups to declare anti-Black racism a public health crisis — an effort they say has taken on fresh urgency in the face of COVID and police violence, both of which disproportionately impact Black communities.

“Systemic anti-Black racism is a public health crisis in Canada,” said Dr. Onye Nnorom, a public health specialist with the University of Toronto’s Dalla Lana School of Public Health, and president of the Black Physicians’ Association of Ontario. “We are at that point. We are dying and no one is paying attention, whether it’s due to police violence or health-care neglect.”

For some it's indeed a distraction from covid19, 200k demonstrators showed up in Washington
https://www.thestar.com/news/world/2020/06/06/washington-braces-for-largest-protests-in-the-city-yet-over-the-killing-of-george-floyd.html 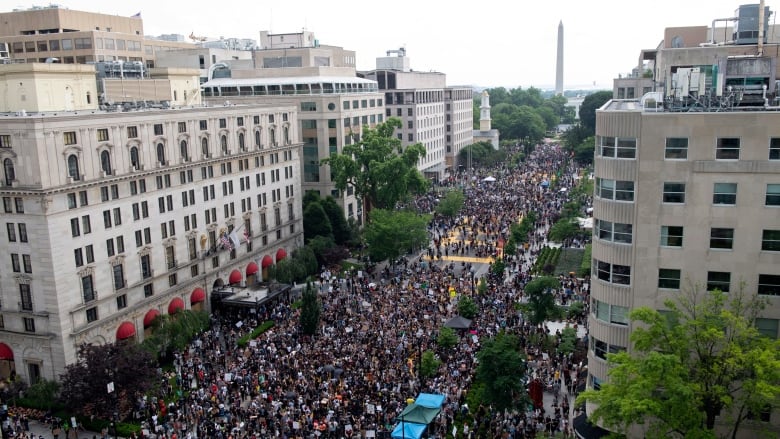 If there is strength in numbers, then Saturday’s crowds on the streets of Washington were by a fair measure largest and most powerful yet. An estimated 200,000 people, outraged by George Floyd’s death 12 days ago at the hands of Minneapolis police, gathered in the newly-renamed Black Lives Matter Plaza near the White House, before the steps of the Lincoln Memorial, and on the grounds Capitol Hill. They marched through residential and commercial neighbourhoods all throughout the city, in a movement against police brutality and in favour of racial justice, chanting “Black Lives Matter.”

That's got to have an effect, perhaps not on reforms, but on covid19 deaths.

In a contrast to the scenes of armed troops liberally using pepper spray and charging crowds alongside broken windows and burning buildings that defined the media image of protests on the same site less than a week ago, the mood on the street near the White House in the hot sun of the afternoon was almost like that of a concert festival. A giant “Black Lives Matter” mural had been painted in yellow on the road, and on it a man played a guitar and sang into a microphone. People at tables handed out bottled water and snacks, and local restaurants distributed free sandwiches and half-smoked sausage dogs. A P.A. system a block north pumped hip-hop near porta-potties and food trucks. People snapped selfies in the street near unarmed soldiers in combat fatigues.

These may be the symptoms of a movement going mainstream — and the question on some minds is whether this softer, family-friendly form of demonstration would ramp up or relieve the momentum toward addressing racial injustice.

Elijah Devine spoke loudly to remind everyone they were protesting a man’s death — and too many other deaths. “Someone literally put the foot on a black brother’s neck, and we are right here walking around cool, singing Kumbaya?” he said. “Just remember what you’re here for. Remember the purpose. George Floyd got killed. Sandra Bland got killed, right? Say their names! People are just walking down the street, like this is a party. Like this is a festival. This is not a festival OK? This is talking about life,”

Does Canada have a race problem? Perception down here in USA is that Canadians are friendly bunch that don't even lock their doors at their homes.

Corrected that for you. Were there even widespread protests in Florida last week already?

While the protests will also increase the tally, most are still in their incubation period. What we're seeing here is the result of reopening the country way too soon and too fast, and the coronavirus will certainly get back to previous heights again due to this. Compared to the effect of the premature reopening, the protests will probably only have a negligible effect.

I have close friend that lives in Miami that I talk to frequently.  I believe he said they have been protesting in Miami for about a week now.

I feel like we would have seen this happen sooner since Florida has been opem for almost a month now. And NYC doesn't open til Monday so the protests makes the most sense.

And yeah I saw on Twitter people protesting last Thursday in Florida.

@SvennoJ
The point of the mask is stop the range of the virus. Corona travels far even without coughing. With masks you leave the virus within your own sphere, adding distancing to it gives the virus very little room to spread. Even if it reaches another host the virus load will be a tiny fraction, leading to less severe outcomes. And add to that the high level of monitoring and the ridiculously small amount of infected people on the streets you have very few and even decreasing infections. Germany is doing extremely fine right now and there is no way it's gonna flair up even close to what the peak once was.

The only reason the infection rate got where it was was because the virus had absolute free roam for months, that's not something that will happen anytime soon. The only way for the spread to increase again is if the masks and distancing go away and that won't happen in Germany before the vaccine is widely available.

You should maybe try smoking some weed or eating some edibles.  I get so high sometimes that I forget about everything.