Probably because there is a large number of games on the system which target the mass market (Smash, Splatoon, 2D Mario, Mario Party, Minecraft, even Breath of the Wild, which is more like classic Zelda). It is very reminiscent of the Wii and DS days when games would lift hardware sales months and even years after release due to word of mouth and the games being accepted by a larger audience. The same seems to happen with a bunch of Switch games right now. Super Mario Bros U Deluxe is the perfect example of this: Slow start but extremely steady sales.

Interesting week. DMC V is the big release obviously, but 100K seems kinda weak. As far as I can see DMC 4 started off with 200K, so this number might be disappointing. On the other hand maybe this release is geared more towards the west and will grow there.

Switch is surprisingly strong. It seems the week it were down to 50K was an outlier, not the new baseline. PS4 get's a sizeable boost by DMC, we'll see how fast it drops back to 20K. 3DS looks clearly dying now.

All the PS4 games are seriously outlegged by Switch-software. It is so obvious currently, as they ordered themselfes in blocks now in the chart. The PS4-block has 2019 as release date for everything in this block and is still outsold by even large amounts by software release 2018 and even 2017.

Ah yes, and NSMBUD is close to 500K. This might even reach the sales of the WiiU-version. Considering the performance of other WiiU-ports, this actually is pretty bad.

Yeah, this is kinda surprising.

And the Switch is still somewhat fresh, so new software still can have a big effect on sales. Later in lifecycle everyone wanting the new game already has the console.

I always like the direct translations of japanese titles.

I have the feeling like the Switch was early attacking the Vita-base (and WiiU for that matter). But now it goes stronger and stronger into the base of the 3DS too now.

Thanks for your work. The baseline-calculation was so high for PS4 this time last year? So the baseline might go down over the summer even more?

The small ps4 price promotion having a great effect. After it ends they really need to make it permanent come days gone launch. And do it WW.

The legs of BotW are crazy.

It has now been in the top20 of MC for over 2 years. Has not dropped out once.

It has a crazy stable baseline (this chart is without launch week)
Lowest week was week 42 2018 with 4208 units.

BotW is currently the 3rd biggest Zelda in Japan and only 300k behind 1st and 2nd which are the two original Zelda games on the NES.
And this is without digital sales.

Well, if you take out the new releases DMC V and Kirby's Ultra Epic Yarn, then you'll see the top 10 are all Switch games. Even without new games, the legs of the existing ones are carrying the Switch.

Agree, at this point, Switch is selling great alone whithout any new release.

Because it's basicly a portable, and Japan mostly buy portable; it's a "life style", and a different culture.   It doesn't matter Switch has no new games, they would buy it anyway.

What surprise me is people who still get surprised about it :D

Seriously, I was expecting this kind of hold for Switch only with released revision.

Switch already start making huge difference (around 50%) year to date compared to last year, despite we had only NSMBU DX launched from start of this year. 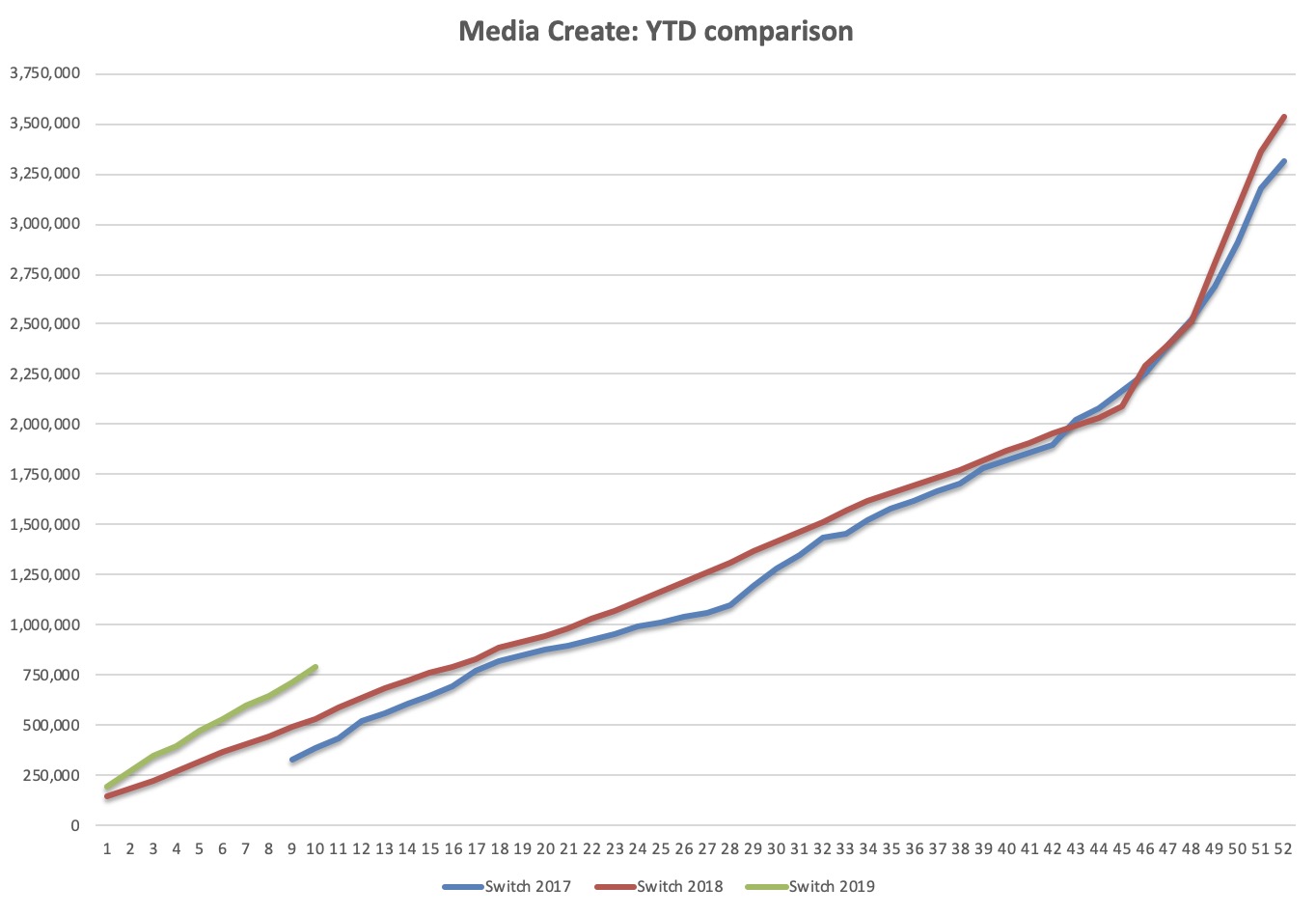 It will far exceed the Wii U version. It's already tracking ahead of it and its legs are much better, Wii U version was selling less than 6k/week at this point while Switch version is still over 20k/week.

Same goes for the West, its debut was 30% higher than Wii U version according to NPD and it has been the number 1 Switch game in the EMEAA charts since launch and remained in the top 10 for all platforms.

This is all excluding digital which is much higher on Switch compared to Wii U.