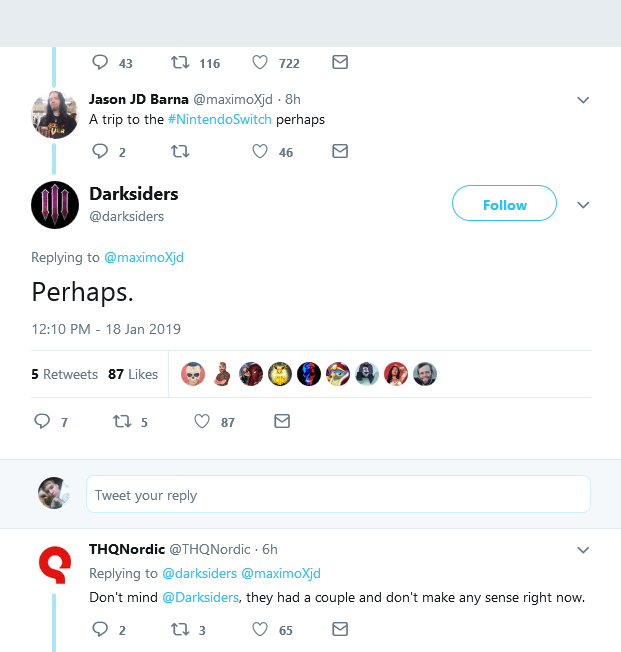 I really hope they port Darksiders 1 and 3. I know 3 was a disappointment, but I'd still love to play it.

I tried these games a few times. They reminded me of PS1 and early PS2 games and not in a good way. Slow gameplay, muddy graphics, not much interesting to do. Maybe I just didn't give them enough time.

Do you remember which one you played?

I think it was 2.  It was on my WiiU.  I had been told it was a lot like Zelda, but was underwhelmed by the seeming linear gameplay and bland graphics.  It just didn't seem that fun. Like I said, maybe I didn't give it enough time.

Well then do some actual work and fix them this time FFS...

Darksider 2 was certainly not a looker on the Wii U. If I remember right the graphics were quite a bit worse on the Wii u version compared to the other versions. But I played Darksiders 2 on the Wii U and loved it. If I remember right (been like 4 years I think), the game have a bit of a slow start, but man does it get really good once it picks up. The Dungeon in Darksiders 2 are quite good and they get so creative with locations as you progress further. I also liked the loot nature of the game, I will admit the open world the game had was kind of annoying and pointless. I thought the gameplay had a lot of meat to it, they constantly taught you new attacks as you played. But Wii U port was sadly terrible; bad framerate, graphics, screen tearing, etc.

But yeah, the game certainly isn't for everyone.

If it's first DarkSiders, i would buy it 1st day, the rest of them are no for me.

Only the first one was good.. the rest was meeh.

I enjoyed 2 a lot on my Wii U and really love death. I hope it's a collection with all 3

I like the Darksider games, probably wouldn't shove out any more money to play them on Switch though.