Yeah first place looks solid for Bernie, it would really hurt him to not get first. Especially if he gets second to anyone but Biden. Warren needs second the most, but only because Klobuchar isn't expected to get second anyway. Klobuchar needs a good showing though, she has to get some delegates. Same for Pete. Not getting any delegates would confirm the prevailing "Pete and Amy can't win non-whites" narrative. Under 10 percent would really hurt them, crossing that psychological "single-digits" barrier that Warren and Biden crossed in New Hampshire. Biden and Steyer still have South Carolina, so they can take a poor performance, though Biden getting single digits again would be really bad, and anything outside the top 3 would be really bad. Biden needs second the least though, because even 6th place wouldn't knock him out. He's in this to Super Tuesday no matter what.

Warren being second would breathe new life into her campaign, being non-viable would probably be a death blow. Honestly if she gets single digits in Nevada and doesn't drop out, I might start to believe Uran about her wanting to drag Sanders down out of spite. 538 already has her at less than 1% chance! Just 0.8 and still falling! She definitely needs Nevada, and getting no delegates or finishing outside the top 3 would end the campaign of any reasonable person (Note that this would mean that Gabbard is definitely not being reasonable by staying in at this point, which I also regard with suspicion). At this point, if a non-establishment candidate is still not getting delegates in most places, they're just taking percentage points from Bernie and dragging him down. You can't combine delegates at a contested convention in return for a cabinet position if you have no delegates to bargain or too few to matter.

In Warren's defense though, it's pretty ironic that in 2016 the argument against Bernie was that he and Clinton were "basically the same" because of Clinton's short Senate voting record being close to Bernie's, and that thus she's just as progressive and it's "her turn". Meanwhile now, they actually have a candidate that is much closer to Bernie than Clinton was, with a much longer record to back that up, and rhetorically similar as well. Yet rather than rally behind Warren under the same argument, the argument on one hand when they briefly supported her is that she's not like Bernie, while on the other hand they rally around various centrists just for being centrist, and bend over backwards to change the rules so a center-right billionaire can enter the race and compete, and seem to be actively seeking for a contested convention. They're not even trying for unity now. She was easily the closest thing to a unity candidate if that's what the party wanted, but they don't.

Okay, I'm gonna raise the red flag now, I have a bad feeling about this caucus. There have been rumors swirling since Iowa that the Nevada caucus is headed for a similar meltdown, and it's starting to look like the Nevada Democratic Party is preparing for just that sort of scenario. If recent polls are remotely correct, the margin for Sanders should have him as a decisive winner with an unpredictable mess for second. Even if there's a meltdown, that shouldn't change, but this could still be really, really ugly. I don't want to buy into the conspiracy theories, because they're just that, but damn, these caucuses never seemed to have a problem before, and suddenly no one can do them right.

The conspiracy theories aren't just that. The DNC has its thumbs on the scale and are very blatant with it this time around. They've had early voting where in predominately latino and black communities they don't instruct them to sign their sheets which would make them void, and instead of releasing where it happened, and who it happened with, they instead gave the campaigns the list....

Honestly I'm surprised people still have faith in the system after 2016 and the DNC being exposed. (They got sued and argued that the DNC is a private organization and can choose their candidate in a smoke filled back room if they wanted to, yes this was the defense they "won" with)

The 2012 Iowa Caucus of the Republicans was a far larger mess. It took weeks until the final recanvassed result came out, and then it turned out Santorum had beaten Romney, contrary to what was proclaimed in the Caucus night. And finally, after some shenaningans, the vast majority of the state delegates ultimately went to... Ron Paul.

It turns out caucuses are shit and the whole thing collapses with large or greater than expected attendances. No wonder 50% or more decided to early vote in Nevada.

Bloomberg is being propped as the new front runner. He gets fake-attacked for being insufficiently woke, crass, racist, sexist, homophobe etc. Best example is Warren and her hilarious "fat broads and horse faced lesbians comment", this will make BB more popular.

He should be attacked on his unpopular policy positions, present and past: supporting Bush's wars, supporting Obama/Clinton's wars, open borders, surveillance state, AIPAC, etc. However, all Democrat candidates and the entire mainstream media support these positions so they can't attack him there. Why do they even oppose him if they agree on everything?

Coincidentally he really did get under Bernie's skin with a side remark about his three houses, most heated gaming moment of the debate.

Mike Bloomberg to Bernie Sanders: âWhat a wonderful country we have... the best known socialist in the country happens to be the millionaire with three housesâ

Their lawyers would have been incompetent had they not pointed that out.  All that means is that the courts have no business telling Democrats how to choose their nominees.

You wanted them to get into messy litigation when there was an easy defense for throwing the whole case out? 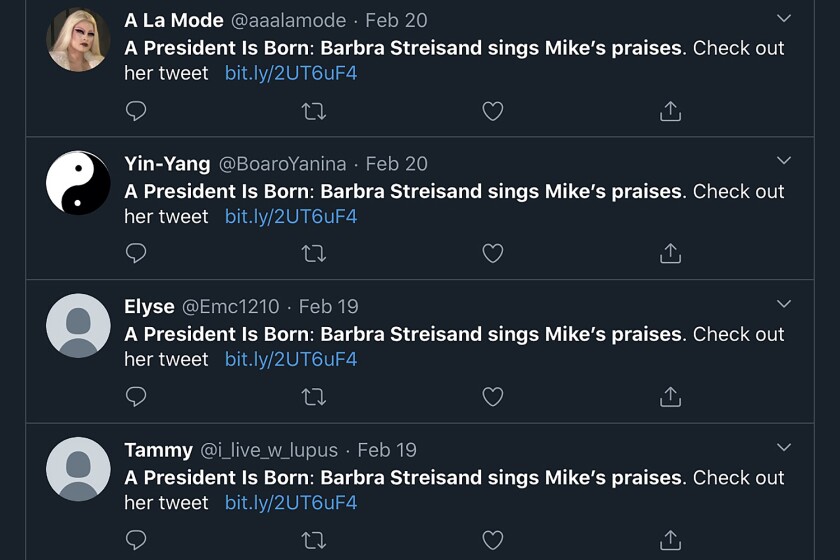 Yes, I'm aware of that, all of it. Yet Trump won despite his establishment not liking him. He overcame the system with popular support. We can do so too. Even if Bernie is the only one that thinks the winner should be the person with more votes (shame on you Warren...), there comes a point where you can overwhelm the system, and Bernie has pretty explicitly said this is his plan. It's also his plan for the general to beat any interference from Republicans. We're corrupt, but we're not North Korea corrupt, or even Russia levels of corrupt yet. That's why this election matters so much. That's why we can't afford to give up, lose faith, or despair. Bernie had said as much that we can't afford that, and we should listen.

Let's have a bit of fun for a moment and imagine a future where Texas turns blue. Not saying this will happen this way, but I want to illustrate a point about how huge turning Texas blue is.

The year is 2032. After two terms of Bernie, AOC ran in 2028 and is running for reelection. Millennials are by far the biggest voting block now, and it shows. She won thanks to historic Latino support, swinging Texas decidely into her column, the first election it became clear the state was now blue, not purple, and it's only become more blue since. New Mexico has simlarly followed suit, a election or two before Texas in fact. Nevada is also not a swing state anymore, though some pundits had been telling us that for over a decade. The Reid machine is alive and well there and bolstered by ever stronger Latino support, Nevada is untouchable. The Republican party is essentially dead in California and Hawaii, and close to it in Oregon and Washington. Chicago keeps Illinois blue forever, and the Midwest states of PA, WI, and MI have swung back with MN. They still look like swing states, but usually go blue. Baltimore keeps Maryland blue, NYC keeps New York bluer than ever. New Jersey is still pretty blue, as is Massachusettes, and Bernie has turned Vermont blue for the foreseeable future even as the world moves on from his era. DC is a state now, and is the bluest of all. Some of these states lost electoral votes in the 2020 and 2030 census, but Texas gained them back, so for simplicity's sake imagine that the states I've named so far are worth about the same as they are now. These 18 states are all Democrats would need for 273 EVs. Speculation in the Trump era that Connecticut, Delaware, and Rhode Island might one day swing red due to an aging white population came true and Maine and New Hampshire are swing states that swung red, and Arizona and Georgia never panned out, Virginia was lost again for similar reasons to New England and Florida went red thanks to white retirees. Yet even with the old blue wall collapsing, and gains in the south lost, Texas is all Democrats needed to make the presidency untouchable for Republicans.

Fast forward to 2036. AOC endorses a successor. We've now had 16 years of Democratic rule. Trumpism is finally dying out, and Republicans run a moderate. However, the Latino vote is pretty solidly in the Democrats corner now, and demographic change puts even more of the southern border in Democrats' hands. This time, we do get Arizona, and enough old boomer retirees have died that Florida swings back blue again to a younger, more Latino electorate with Cuban descendants of Castro refugees no longer afraid of socialism. Hawaii and California are still one party states, and Washington and Oregon never had their Republicans recover. Texas, Nevada, and New Mexico are still blue. Georgia finally swings blue as the state has grown increasingly more black and less white. The urbanites of DC, Maryland, Illinois, Massachusettes, New York, and New Jersey keep their states blue, and Vermont is still blue from Bernie. The whole midwest outside of Chicago swings red now, MN has gone red for the first time since FDR. Yet even with the entire midwest lost, with just the Mexico border, west coast, Florida, Georgia, Hawaii, Vermont, and a handful of urban states, with just 16 states and DC, Democrats have the presidency again with 273 EVs.

I personally think these are on the extremely, unrealistically bad end of things for Democrats if they turn Texas blue. I just pretended Republicans always won Colorado somehow, and Virginia is NOT likely to be red all the time. It might not even be purple in the future. Georgia will probably turn and stay blue well before 2036, because it is highly polarized and inelastic in its voting patterns and change is mostly driven by demographics, which are trending our way with no end in sight. North Carolina will probably follow Georgia and Virginia to the blue side. New England will probably stay blue even as its population ages. Add those states in, and any Democrat that wins the midwest, which will probably stay swing states and not go red, will win between 332 and well over 400 possible EVs. With the executive branch that untouchably blue for that long, the Judicial branch would end up deep blue as well. I don't see a Republican party that can't ever control two out of three branches even by going moderate being able to survive long term. If we get Texas blue, something fundamental will have to change about politics for Democrats to not control basically everything forever. Republicans going the way of the Whigs and a Democratic party split into progressive and corporate factions that become their own parties seems the most likely outcome to me. Again, assuming we can turn Texas blue in the next decade, and especially if we turn it blue in 2020.

Thanks for listening to my TED talk.