Forums - Gaming Discussion - So come on then - who had the best conference??

Alpha is simply "engine" and "proof of concept". Its playable, that is always a sign that alpha is reached.

Also - how long have they been working on this baby? 3 years? If it is truly still pre-alpha, then the game won't be released until 2010.

Honestly, pretty much yeah. Like I said the Playstation 3 serves no purpose for Sony anymore except to siphon money out of their pocket book.

BTW, was I the only one who left the MGS4 trailer feeling a little unimpressed with the graphics? The trailer looked cool story-wise but everything just looked... flat. Was I expecting too much out of this game? 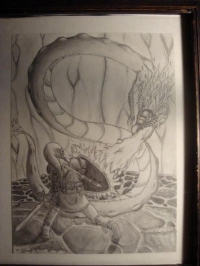 well im not a big fan of mmo games or fps.

ratchet and clank looked cool but there was nothing there that really amde me say wow, i mean the graphics for mgs4 and killzone were very good yes but they just didnt do it for me.

homes pretty cool though i really like the direction they're taking with it.

singstar doesnt appeal to me at all, im looking forward to guitar hero but, im probably going to get it for wii since it will be cheaper.

but seriously the possibilites are endless with that boardand its' far superior to the nes one. i really hope developers take advantage of it.

Honestly, since last year everyone basically boycotted E3 almost out of existence and with Sony the only one this year needing good press, it would kind of make sense they're the only one who actually cared about or tried at the event.

This thread is full of unlimited awesome.

E3 sure brings out the b*tch in everyone

They can call it what they want but when a game is playable with polished textures, physics, and graphics, I have a hard time calling it "pre-alpha". Sounds like they're blowing their own horn on this one to imply that the game is somehow going to improve graphically many times over when we know that's not going to be the case.

They've been working on it for awhile and are definitely pouring a lot of resources into it. They're working so hard to try to prove the PS3 is superior to the 360 that they're really missing the point. If it's so superior why does it take a massive effort to show it? 135+ man team working years to make something that will in all likelyhood look slightly better than what's on the 360? And that's not even a given considering it's coming out next year and we have no idea what improvements games on the 360 will have by then (EA has their franchises now running at 60fps on the 360, who knows what they can now do if they reduced it down to 30fps and used the extra resources for other things).

fair enough, just two different types of gamers you and I if those graphics did nothing for you then i can understand why you are excited for the wii board , sorry, its just hard gauging peoples opinions(other than the usual suspects here) but it seems youre tastes fit right in line wiht what Nintendo showed so i dont see how anyone could argue with ya.