appart from Pikmin and Little King Story, we can enjoy this :)

It's kind of like Pikmin, except you control evil minions and wreak havoc upon the land.

August 13, 2008 - Publisher Codemasters on Wednesday revealed to IGN that is planning to release a new take on its popular Overlord franchise exclusively for Wii. The title, built from the ground up for Nintendo's system by Climax Studios, is called Overlord Dark Legend and is set for a 2009 release. Players control a young, new Overlord as he takes control of his evil minions. The "trainee tyrant" will, according to Codemasters, "be able to take his growing pains out on the local fairy tale inhabitants as he protects his castle and lands."

Dark Legend will feature an original tongue-in-cheek storyline penned by award-winning games author Rhianna Pratchett, and is set to include a host of old and new franchise-favorite characters, including Halflings, trolls, elves and dwarves, as well as new wicked witches, gingerbread men, and Lil' Red Riding Hood, "the seeming sweet girl with a very personal lupine secret." 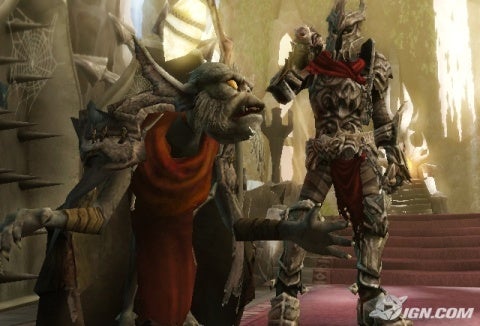 Become the Overlord and control your minions with the Wii remote.

The Overlord franchise sparked to life on Xbox 360 in 2007 and immediately drew comparisons to Nintendo's own Pikmin because the main character, although very different from Captain Olimar, controlled his squad of minions around the world very similarly to the way Olimar did the Pikmin. Players used the second analog stick to move the Minions about like a wave.

Of course, Overlord Dark Legend will make full use of the Wii remote to further enhance the experience. According to Codemasters, the Wii remote enables "unprecedented control over the minions." Using the controller, gamers can pluck a minion from the horde, hold him by the neck and shake him around, "throttled to imbue him with some Overlordly power and turn him into a manic minion missile." Now charged with an explosive body, the in devilish critter can be guided into enemies with "hilarious, if rather fatal, consequences." 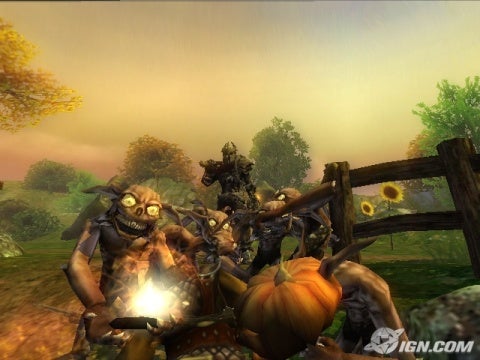 Pillage villages and kill anybody who crosses your path.

Overlord Dark Legend sounds very promising to us. For more details, we chatted with Codemasters' Dean Scott, who is serving as associate producer on the project. Here's what he had to say:

IGN: Will Overlord Dark Legend be a port or an all-new game for Wii?

Dean Scott: It's an all new game, designed especially for Wii. New story, new characters, new gameplay. It doesn't make sense to try and port the old version, when the Wii gives you an opportunity to make something that works very differently. The key difference is in how you play it. You point, and the minions go and break and kill things. It's a very literal connection for the player.

IGN: How is Overlord Dark Legend related to the first Overlord game?

Dean Scott: There are lots of subtle connections for Overlord-savvy gamers, but in the lineage of the series the events take place before the original game. So certain things you do set up events featured in the other games. It's not the same Overlord though. We're setting up the idea that there have been a series of Overlords throughout time.

IGN: What can you tell us about the story?

Dean Scott: It's part fairy tale, part classic fantasy, and all hilarious. Obviously we've twisted the fairy tale stuff around, because it wouldn't be an Overlord game without a load of black humor. So instead of helping Little Red Riding Hood find her grandma, you'd be helping the wolf shop for granny-friendly sauces. That's not actually in the game, but you get the idea.

Dean Scott: It's the same four minion types, but we've given them new abilities. Some of these may be themed around bodily functions that childish folk like us find hilarious. We'll be revealing more from GC Leipzig.

So now we have Little King's Story, this....and still no Pikmin.

Should help ease the long wait for Pikmin :)

The support keeps coming. I never got a chance to try the 360 version but this one may be worth a rental.