I think it’s highly plausible that Xbox outsells PS5 in North America this generation, but I do not think the sales splits we are seeing in Europe will be sustained once PS5 stock improves.


I don’t think Xbox will have a real shot to overtake Sony globally until 10th generation, which history would suggest would start in 2028 or 2029. Assuming the ABK deal goes through unscathed, I think Microsoft’s services offerings are going to be extremely difficult to compete with by 2028. When the yearly call of duty’s and games like ES6 start hitting gamepass, Xbox is going to recapture a lot of mindshare as a “cool” brand again. To an extent it already is.

I will be really interested to see the strategy both PlayStation and Xbox adopt for 10th gen. I know that supply chain issues will likely be resolved by then (one would hope anyway), but I think the 2 SKU strategy has proven so successful that both companies will adopt it next time as a “just in case” measure

Here we see data representing the global sales through to consumers and change in sales performance of the three current platforms (PlayStation 5, Xbox Series X|S, and Nintendo Switch) and three legacy platforms (PlayStation 4, Xbox One, and Nintendo 3DS) over comparable periods for 2019, 2020, 2021, and 2022. Also shown is the market share for each of the consoles over the same periods. 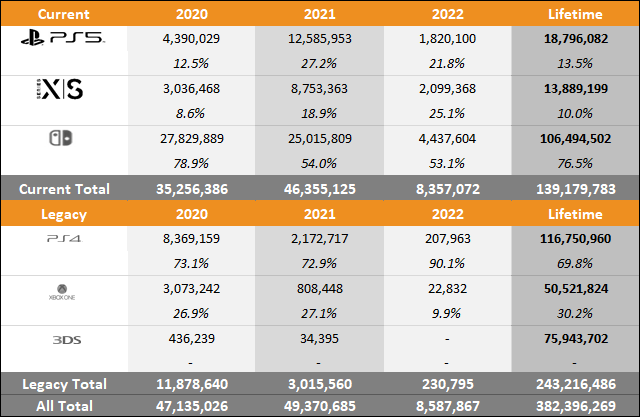 The problem with this line of thinking is that Xbox is still behind the PS5 in lifetime sales including in NA + UK. The snowball effect is still in the PS5's favor even with shortages. If the Series S can't even shift enough units for 100K weekly wins, despite their availability in every market and low price entry, I find it hard to believe it's turning the tide for the generation, with everything working in its favor at the moment. I do expect Xbox to win March NPD though, but if it fails to do that, it would be extremely underwhelming for the brand.

What people need to realize is that Xbox never lost momentum in NA, even during the early days of the Xbox One, and the likelihood of Xbox winning NA in a landslide similar to the Xbox 360, is as likely as the PS5 outselling the PS2's lifetime in Japan. Xbox winning NA by 5M - 10M units will get cancelled out by whatever the PS5 sells in Japan. The issue is Xbox gaining traction in Europe and RoTW where PlayStation can legitimately outsell it 3:1, 5:1, even 10:1. Regions where Microsoft sells 100K - 200K units over the course of a generation are regions where Sony sells over 1M PS5's in the same time period. Xbox could sell 70M+ units this generation and still be behind 50M in unit sales.

What time exactly ? Most of sales from Playstation consoles comes from the second half of their lifecycle. No successful console stopped being in demand after the first two years... ever

The people who buy early are gaming enthusiasts, exactly the ones MORE likely to purchase another console, or to purchase an upgrade version after a soft refresh. With the main driven of Xbox sales being Series S it's as certain as the sun is hot this people will want to upgrade once the second half of generation hits and the games become more power-hungry

This is when we will know whether Xbox is indeed more desirable or if they are just taking advantage of the lack of supply. My horses still on PlayStation, people are delusional to think Xbox is anywhere near close the mindshare Sony had outside USA

The biggest problem with your statement is that it's assuming just because PlayStation had a fantastic generation that it would be near impossible for Xbox to catch up in other regions. Although PlayStation is really starting to hamper down in Japan since they've become much more Western focused in recent years. But, if that was true, the 360 and PS3 generation wouldn't have been as close as it was compared to how disgustingly dominant the PS2 was compared to the original Xbox. And that's including the red ring of death debacle and Xbox still had the lead most of that generation. So you can't base what happened during the Xbone and PS4 generation and think that it will play out the same this generation.

Now that Xbox is going to start cranking out first party titles, a lot of rumors are showing 6-7 games in just 2023 alone, Xbox is finally starting to catch up when it comes to first party output, and if Sony is unable to shore up their shortages by this year, you may very well see those ratios decrease almost 1:1 within the next couple of years. Minus Japan, ain't no way Xbox can compete lol.

Xbox is playing the long game on this, and this generation is aiming to be a long one. This is all keeping in mind that Xbox isn't even focusing on selling as many consoles as possible as Sony or Nintendo are. I don't even plan on buying an Xbox this gen because I get the same experience on my PC.

So no one should be surprised within the next 3-4 years if Microsoft pulls ahead. Is it likely? I personally don't think so, but numbers will be much closer than many give Xbox credit for.

Was with you on a lot of this until the end. There is absolutely no way that Xbox sells 70 million consoles lifetime with PlayStation selling 120 million consoles (which is where it would be if Xbox was behind by 50 million sales). We have seen from 3 consecutive console generations (6th, 7th, and 8th) that the global console market has been able to support no greater than 175 million combined PlayStations and Xboxes. We have seen 0 evidence that this has changed, and it would take a seismic shift in the market for this not be the case.

Series X/S is outselling the PS5 in 2022 by less than 300K units? I would've thought it was significantly more since many users were rallying behind the Xbox comeback scenario. All things considered, it should be a much larger gap, with Microsoft supposedly paying a premium for chip priority, and the availability of the Series S, but its nearly 750K units behind the PS5's 2021 sales aligned.

If Xbox was truly turning the tide than the Series X/S sales in 2022 would be right on the heels of the PS5's 2021 sales.

I've said this in other threads but I think the pandemic has brought back a lot of lapsed gamers which will boost the overall market for hardware sales. Otherwise the PS5 and Series X would not have stock issues at this point in the generation especially with their price tags. Just look at how easily available the PS4 and Xbox One were 6 months from launch. I actually purchased a PS4 with ease 8 months after launch. When the PS4 hit 10M lifetime sales, it was easy to find in store or online, but the PS5 was still extremely supply constrained despite hitting 10M faster than the PS4 with a higher price.

Did anyone really think XB would be able to close the gap let alone create a new one? So while you say it should be larger for XB you fail to mention that to even close it was already a pretty big feat. Back in Feb, XB was still behind the PS by 88k units. Then in Mar they not only closed it but pulled ahead by 76k units. Now it is sitting at 279k units ahead and unless something bad happens... it's only going to get larger.

The PS3 generation was an outlier from Sony in many regards. It launched one year later, had a ridiculous price tag but still ended up bleeding money, difficult hardware to develop for, and it also coincided with Sony's fall from being the dominant brand in electronics. Ironically enough, the PS3 actually outsold the Xbox 360 launch aligned despite all of that, so you could argue the only reason the X360 had the lead was because of the staggered launch. Microsoft won't have that kind of advantage again.

Aside from Call of Duty, which is going to remain multiplatform for this generation at least, and Starfield, very few of Microsoft's first party games in the next couple of years are high profile, tentpole IP's that can match the mindshare of something like GOW or GT7, yet alone massive Marvel IP's like SpiderMan 2 or Wolverine. Games like Fable, TOW2, Hellblade 2, Everwild, Avowed, Gears 6, won't generate as much excitement as FF16, yet alone something like GOT2. They may have a slight lead in quantity, but with the amount of partnerships Sony has with independent studios, which includes developers from regions where the Xbox is non existent, as well as third party deals, I don't particularly see Microsoft drowning out Sony in releases.

This is also not considering the type of moves Sony will make in the future. What happens if Sony acquires a few publishers themselves, they get big multiplayer hits from Bungie, Deviation, and Naughty Dog, while releasing new IP's that become 20M+ sellers similar to Horizon & TLOU? The numbers will be closer, yes, but it says a lot about Xbox currently if it needs continued PS5 shortages to pull ahead, instead of surpassing it as a brand.