It's actually a very small gap when you consider that Switch it 2020 didn't achieve anywhere near it's potential sales,

With OLED, Pokemon Remakes, Mario Party, SMT V I expect this Quarter for hardware to reach at least 2.2 million could end up a lot higher if Nintendo have been able to maintain production targets of 30 million for the FY. There is also a New Horizon direct that I expect to have an impact.

Overall 2021 is heading for peak hardware and on Famitsu with just 2.1 million needed to surpass 6 million:

I'm not really sure which week Pokemon drops but I'm guessing it's 49, basically with-out the OLED I could have easily pictured this year, I expect Nintendo to ship less than 1.5 million OLEDs to Japan. The item to be the hottest video game gift for the holidays leading to high price not only in Japan but also in China, South Korea & Taiwan. If demand is not satisfied in neighboring countries I can foresee a situation where many OLEDs end up overseas similarly to PS5.

I don't think OG Switch will suddenly become unpopular if you can't get your hands on OLED but want Switch for the holidays, the Lite will drop down to around 15-20% of hardware sales for Nintendo in Japan after OLED launches, I actually think it demand for it will take the biggest hit overall and could end up fewer than 500K sales this Q. With OLED launches it just replaces the demand there was for the OG Switch. I think if Nintendo really wanted to sell the Lite at high numbers in Japan they would need to drop the price of it by at least 30%.

Next year I expect the OLED to phase out the OG in Japan as production scales up to meet demand.

We will see, but that's what I anticipate will happen.

Yeah, I struggle to see why an Isometric sprite based RPG would skip the Switch. I think its more likely the developers/publishers are stuck in their ways versus Sony paying for exclusivity

Good week for PS4 with 4 titles in the top 10. Xbox Series X|S continues to increase its lead over the Xbox One launch aligned. It will surpass 100k next week.

I doubt anyone really believes Sony is paying for exclusivity. However loyalty can go only for so long in a company when fighting against the current, they are also working on a new engine that is focused on the PS4/PS5 ecosystem.. So while they are investing resources into that the small company can't invest into putting Switch ports into it's current workload leading to licensing their games to other publishers for them to create Switch ports and tap into the market.
If the market continues in it's current direction they will need to change course for their 2022/2023 releases unless they want to stagnate while other companies are growing. 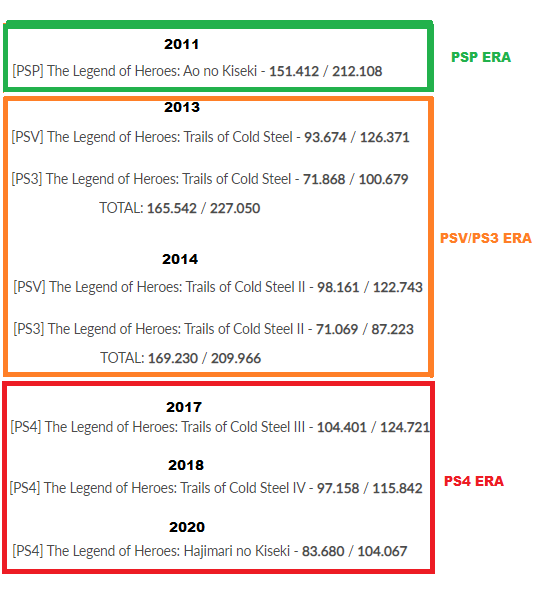 Potentially across Switch & PS Ecosystem I think Falcom could really have games over 200K again, but I'm not an optimist - I think next year they will continue with their PS4/PS5 plans and experience further decline. PSV audience moved to the Switch at a far greater number than they transfered to the PS4. Now I expect PS4 audience to move in a far greater number to the Switch than PS5... leading to new lows for franchises stuck exclusive on the PS ecosystem. Far Cry 6 is next week what are the chances it's another big decline? COD & Battlefield same story for all other AAA Western franchises.. FFXVI for sure will struggle to hit 500K.. Demon Slayer was an IP some people were touting as a 500K game in Japan since it was announced, now we are wondering if it will break 200K,

Next year will likely be worse as PS4 audience is mostly absorbed by the Switch. Especially as the rest of the Japanese third party support has transitioned to the Switch and is reaping the benefits. There were many years where they stood on the sidelines like Falcom but now we have Konami, Capcom, Koei, Marvelous, NIS all having record years on the Switch both due to their success in Japan and great sales overseas.

Next week will be interesting. I feel like they might have a lot of models for the Switch OLED to push Metroid Dread at the same time. I hope we get a 200k+ week.

Was going by my calendar, not famitsu's weird way to count it.

I would assume that Trails in the Dark will get a Switch version sometime next year. Switch has already gotten Trails 3&4. I can't blame them for releasing the PS4 version first either. There are only 3 months left, and the Switch version might have delayed release until after the holidays. So, they just release the PS4 version now, so that it can be available during the holidays. That's how I see it anyway.

I'm not sure what you mean about artificial hardware sales, but I also think that digital cannot be discounted. The Wii U as a platform did not have strong digital sales, but the PS4 (and subsequently the PS5) do. That said, even if digital/physical is a 50/50 split, the PS5 is still underperforming.