I believe people go with headlines and forget about the target market for a product.  This is not a switch competitor nor does it appear that Valve is positioning it that way.  Instead this is a portable handheld PC.  Its basically for people who have an investment in steam, that want a handheld device they can take their games with them where ever they go.

The whole design and fact that you can basically hookup whatever you want and run whatever OS says this will be homebrew choice hardware right out the blocks.  Forget about the switch comparisons, as that is not the target market.

The fact that I could take this thing on a trip (like say a hotel) and hook it up with the M+K is just pure baller for me. The track pads being bindable is something I only just heard of from the IGN vid, so that's even more of a plus for me (I originally thought they would function only as mouse cursors).

The minimalist dock is sexy too (something Nintendo should take notes on).

Also, can we all take a moment to think that this device might and quite possibly not suffer the dreaded stick drift issue that's plaguing all Switch units?. Because if this doesn't, this device is going to have a leg up in that dept.

Pretty much. Like I own a Switch and I know how good of a handheld it is. But there are plenty of things that I wish it did and that's the hole this fills. This is a console for PC gamers like myself, not for people that want the switch experience.

Like Nintendo games on it look great, they really do. But then you try to play third party games on it...  It looks truly terrible for my liking. Like if you look at something like the Witcher 3, this is effectively what the difference is going to be: 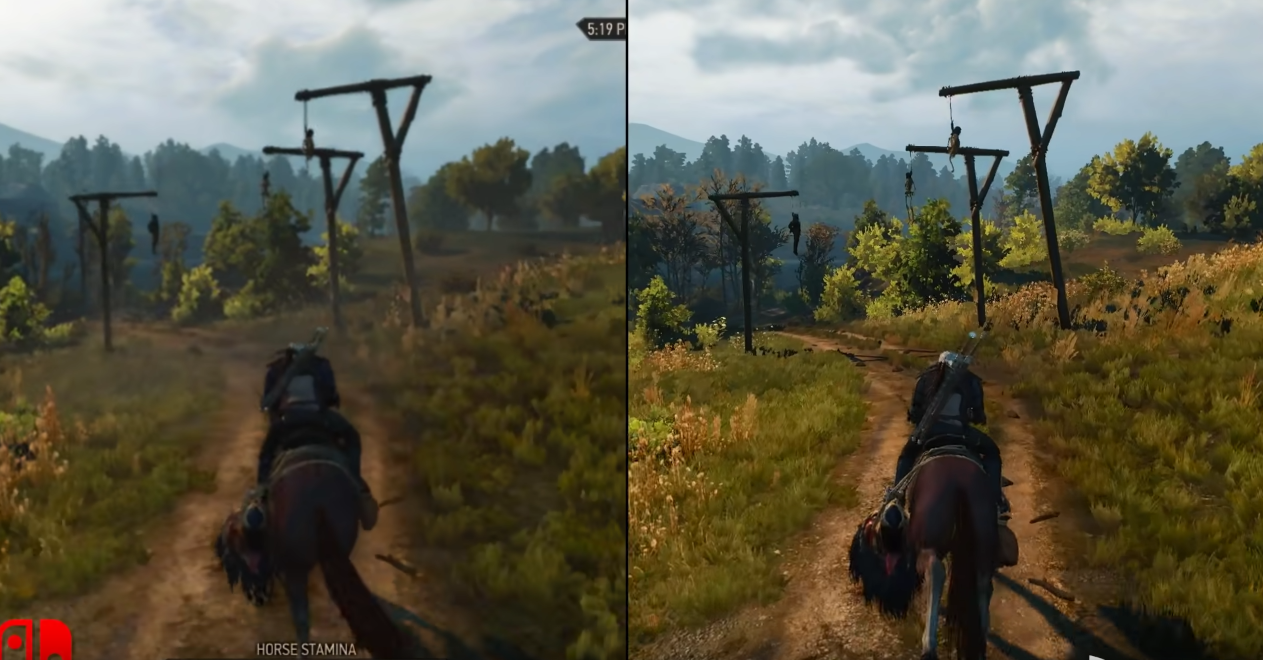 The left is the switch version, the right is the ps4 version as this is more powerful than a base ps4. It's why many people wanted a Switch Pro so badly.

The main reason I am fapping to this is because if you wanted to play third party games on an handheld, you had to either pay $1000 for a PC handheld which are significantly weaker than this or you get a switch and deal with it's short comings. Now you can play Xbox and Playstation games that are coming to PC as well as the large library of PC games on the go. Heck you can even play gamepass games day 1 on this and you don't need to re-buy any of your steam games.

I knew Witcher 3 didn't look good on Switch, but that is worse than I expected. With the Steam Deck starting at $399 that makes me wonder how much money Nintendo makes on the Switch hardware.

Conina on 15 July 2021
"Why is my account not able to place a reservation until Sunday?

We are aware of potential unauthorized resellers, and as an additional safeguard to ensure a fair ordering process, we’ve added a requirement that the reserver has made a purchase on Steam prior to June 2021 for the first 48 hours of reservation availability."

That's how you reduce scalping!

I doubt this is either intended or going to be a Switch competitor. This will most likely appeal to a mostly differerent group, which is PC gamers (existing or aspiring).

Personally I'm somewhat interested in this, although I'm not sure how much use I would have for a portable gaming PC. It might be nice to be able to play PC games in the living room though, and this seems like the easiest way to do it.

This is not a switch competitor.

But it will be hacked and it will run switch exclusives better than the switch.

Interesting, it could do good numbers

It'll doom the Switch the same way the Stream Machines would doom the PS4 and XBO.
It's a nice concept tho, having the full steam library running on it.
That $399 storage tho...

I don't know man.. there's emulators for that kinda thing