The PS5/ XSX aren't even 6 months old - of course the Switch will still have 3rd party support considering how well it is selling.

And there are many games that are still being made for last gen.

The only way Switch 3rd party support would have dried up is if it didn't really have any to begin with.

Gaslighting is certainly one term for it yes. Another is "concern trolling", people pretending to be worried but in reality gleeful at the thought of things going badly. Thankfully you're right, it was always just bad logic and intentions behind the "third party support will fall off a cliff" posts.

No, third party support was strong right from the start, reviewers neither ignored the Swtch games.

Switch had 85 games with a MetaScore of 75 or better in its first 10 months: 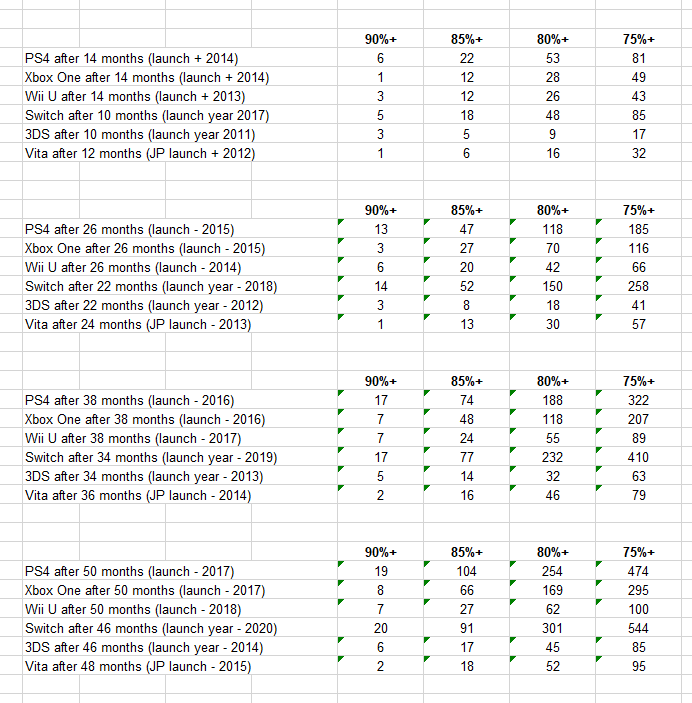 To be fair, the sales of the new systems have been bottlenecked so hard they might as well not be there. So it's going to take a while until they get enough users to threaten the Switch's marketshare.

I don't measure support by the number of games released. Plus even though I haven't stated clearly I was excluding indies because I'm very well aware indies have a very good presence on Switch, I should have write that

I'm sure this is counting 7th and 6th gen ports, not 8th gen titles. I don't see this as support, but the opposite of support, is releasing scraps to make some quick money. I don't bother with those ports at all, I've even bought some of them and I think they are positive for Switch ecosystem, but really getting support i.e. games developed for Switch (either exclusives or multiplat) or even porting current gen games, that's count are really supporting and the real support only becomes clear and visible for me last year

Switch is a mobile device. The DS didn't get killed by the Xbox 360 or the Wii, why would the Switch. I still think the Switch will lose its home audience, but that takes a year. Nobody I know can buy the PS5 or Series X yet (in fact I'm the only person I know with a Series X). Nintendo should do the smart thing and release Breath of the Wild 2 with a new Switch 2, and a new console at the same time, in March 2022.

Then I'm wondering what changed last year / was better support compared to previous years in your opinion.

If we don't count indie games (even if they are awesome like Hades) and ports of older games as support... what is still remaining as 2020 third party support on Switch?

If anything, cross gen games will continue to be a thing for a while longer due to Switch.
PS4 will especially benefit from this from third party devs.

There isn't actually much difference in the list except Capcom has decided to give the Switch 3DS-tier support now instead of just old ports. Well except of course Monster Hunter is not Nintendo exclusive anymore.

Lets see if there are more games like Witcher 3, DOOM Eternal, Mortal Kombat, or Dragon Quest XI's scale, but it would seem those games will become harder to port if the base line becomes the PS5/XBSS.

Just to show what I mean.

These are the 2020 Switch releases with a MetaScore of 80 or above.

Most of them are very enjoyable on Switch, it is awesome to play the old and new first party games, revisit ports of older AAA games like the BioShock/Borderlands/Metro series on a mobile device or to play new indie gems like Hades/Horace or older indie gems like To the Moon/Kentucky Route Zero: 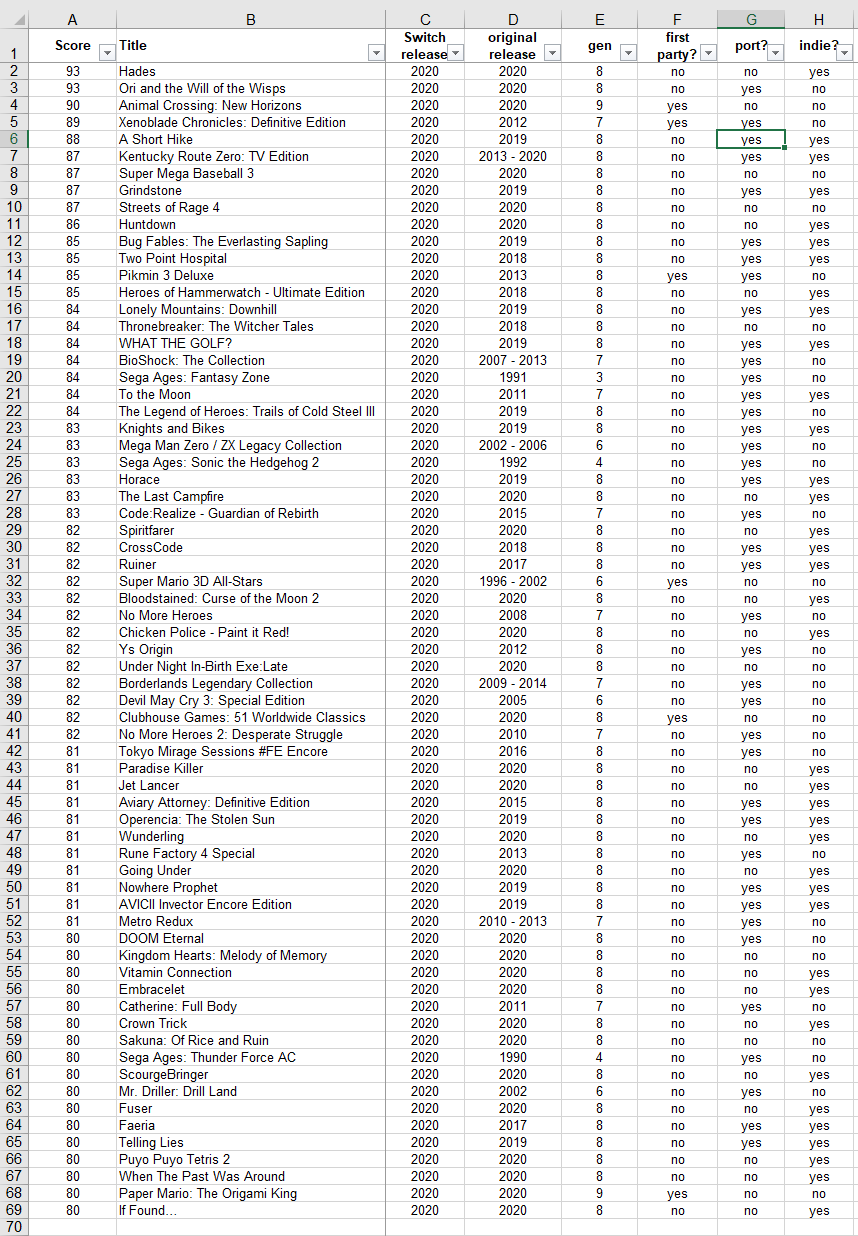 But if we kick out first party games, all indies and ports of games older than 2015, all that's left is this:

And that is similar support to the previous Switch years: 1 - 2 "impossible ports" of 8th gen AAA games and the rest AA titles.