Our only hope is AM2 flops/underperforms and they view her as "toxic" to their box office. I mean, yeah, that makes sense, it's clear she's not very well-liked for obvious reasons (I can't stand G&G, but he's right on the money for once). Then again, they'll probably just blame it on the pandemic, anyway. Because WB is so mindnumbingly stupid and has shown on MANY occasions they can't put 2 and 2 together.

And even if/when the Virginia case rules in Depp's favor, Amber stans will still be like "but da U.K. ruling, bruh". Nevermind that the judge in that case was completely biased towards her because he's connected to her and she wasn't subject to the same cross-examination/discovery rules because she wasn't a party to that case. In Virgina, she'll have to answer for everything, all the lies, doctored photos, tapes of her admitting to assaulting him, bodycam, witness statements, etc., etc., because she's the defendant. She'll even be forced to disclose if she donated to the ACLU as promised, which we all know she didn't, even her own lawyers said so. It probably doesn't help that the Virgina judge has had it up to here with her fallaciously trying to get the case dismissed 3 times, essentially wasting the court's time, which she even threatened her with sanctions for.

And the cherry on top? They won't be able to say "but that Virginia judge totes had it in for Amber" because, guess what? She's a woman, just like that supposed "homophobic" cop arresting her for assaulting her ex was a lesbian.

I don't look for Aquaman 2 to flop sadly, the majority of fans rarely back up these boycott campaigns with an actual boycott. And even if it does flop at the box office, WB will publicly hide it by claiming that views on HBO Max made up for the poor box office, just like they did with Wonder Woman 1984.

Considering the mountain of evidence in Johnny's favor, it would be utterly shocking to me if he loses in April. But, at the same time, this case is in Fairfax County, one of the furthest left counties in Virginia and in the US as a whole, so I could see the judge being so scared of being attacked by the far left nutjobs in his own county if he sides with Johnny that he will give the case to Amber in spite of everything against her. I have very little faith in the sanctity of the US justice system, ever since my mother lost her medical malpractice case against the surgeon who cut through the wrong duct during a routine gallbladder removal surgery, nearly killing her. The veil over my eyes was lifted during that case, we listened to our lawyer when he recommended that we should let a judge decide because a jury would be unlikely to side with a victim in a medical malpractice case,  we watched the surgeon lie under oath about telling my family he made a mistake, we watched the judge sleep through half the case and then rule in the Surgeon's favor, we watched our lawyer go out to dinner with the Hospital's legal team after losing our case. The hospital very clearly paid off both our lawyer and the judge.

WB won't have any simultaneous HBO Max-theatrical releases in 2022, it's for their 2021 slate only, so they won't have HBO Max views to fall back on, but yeah, I won't be seeing Aqua Man 2 in theaters because I refuse to support WB for rewarding and enabling her for what she's done while firing JD, the actual victim. And I've gone out of my way to avoid buying EA, Activision and Konami's games (what few they actually still make, anymore, which are rubbish, anyway), so believe me, I stick to my (boycott) guns (oh, how I wish all these "EA/Acti are evil!11!" folks would put their money where their mouth is). If I care to watch it, I'll watch a bootlegged version on the internet so they don't get my money like I did Black Christmas 2019 (I watched it for free online just because I was dying to know how bad it was out of morbid curiosity, and holy shit was it awful).

As for the Virginia case, I wouldn't worry too much about pandering. I get the skepticism (look at all the provable crimes she's committed and gotten away with), but my guess is that this judge is NOT similarly going to bat for the most hated person in the world who has a mountain of evidence against her and continually looking worse with every new bit of info and who she'd already struck a nerve by wasting the court's time in trying to get the case thrown out based on the faulty UK verdict which even American judges, including herself, have said JD did NOT get a fair trial. She had all the cards in the UK case because of all the well-documented ties she had with the judge and she herself wasn't an actual party to, here, she'll have no recourse. It's a she BTW.

only johnny depp would use the pirates of the caribbean aztec gold coin as an accessory at the met gala pic.twitter.com/wW9rbyMH64

Legend. I really hope Johnny gets the justice he deserves, and that every bit of hardship Amber caused him is returned on her at least twofold after the lies she told to destroy his life.

Yep, this Tweet and the featured pics should tell you everything you need to know:

So Amber Heard under oath stated in the UK:

“I had bruised ribs. Bruises all over my body, bruises on my forearms from trying to defend the blows. 2 black… eyes…broken nose…broken lip”

Nothing screams out LIAR like days later frolicking on a beach MAKEUP FREE...no injuries pic.twitter.com/mlEYDI6XE2

She was also shown hours after her so-called "injuries" bruise-free. Those kinds of injuries don't just magically go away days later, let alone hours. I had a minor black eye one time and I can confirm it didn't heal up as fast as AH claims "hers" did. #AmberHeardIsALiar

So sorry to hear about your story/loss BTW, I probably should've mentioned that in the above post, that's tragic. Yeah, that judge was likely paid and/or in bed. You know, kinda like the UK judge was.

Johnny was given the highest honorary award that the San Sabastian Film Festival can bestow today:

Johnny Depp at the San Sebastian Film Festival where he will receive the Donosita Award...the highest honorary Award that can be given at the festival

How precious is this man!! pic.twitter.com/NlAJIx4Sb0

He also had some things to say about the recent rumors that Disney is working on 3 different Pirates of the Caribbean movies, none of them with Jack Sparrow in them, and Hollywood blacklisting him:

“if they’re moved by captain jack in any way, i don’t need a company to do that. i can just do that myself and nobody can take that away.” - johnny depp pic.twitter.com/FHs10tF7cq

“I think that Hollywood has grotesquely underestimated the audiences.” -Johnny Depp

He also had some things to say about the recent push for streaming movies at home vs. seeing them in a theater, and the recent lawsuits against movie studios from actors/actresses who aren't being paid for streaming views on their movies:

Whadd'ya know? AH's antics have inspired another nutjob to threaten to smear her ex with lies and false accusations. She even mentioned AH by name, saying she'll do exactly what she did:

Seriously, people like that need to be locked up, not getting film roles, Heard, too, absolute pieces of trash. And it'll only get worse if AH continues to get away with it, all the more reason she needs to lose the Virginia case. We don't need more nutjobs thinking they can get away with this shit. They even both said "no one's gonna believe you because you're a man", only the scummiest of scumbags can utter those words.

Never stick your wiener in crazy,it isn't worth it.

And speaking of crazy, WB continues to look worse: 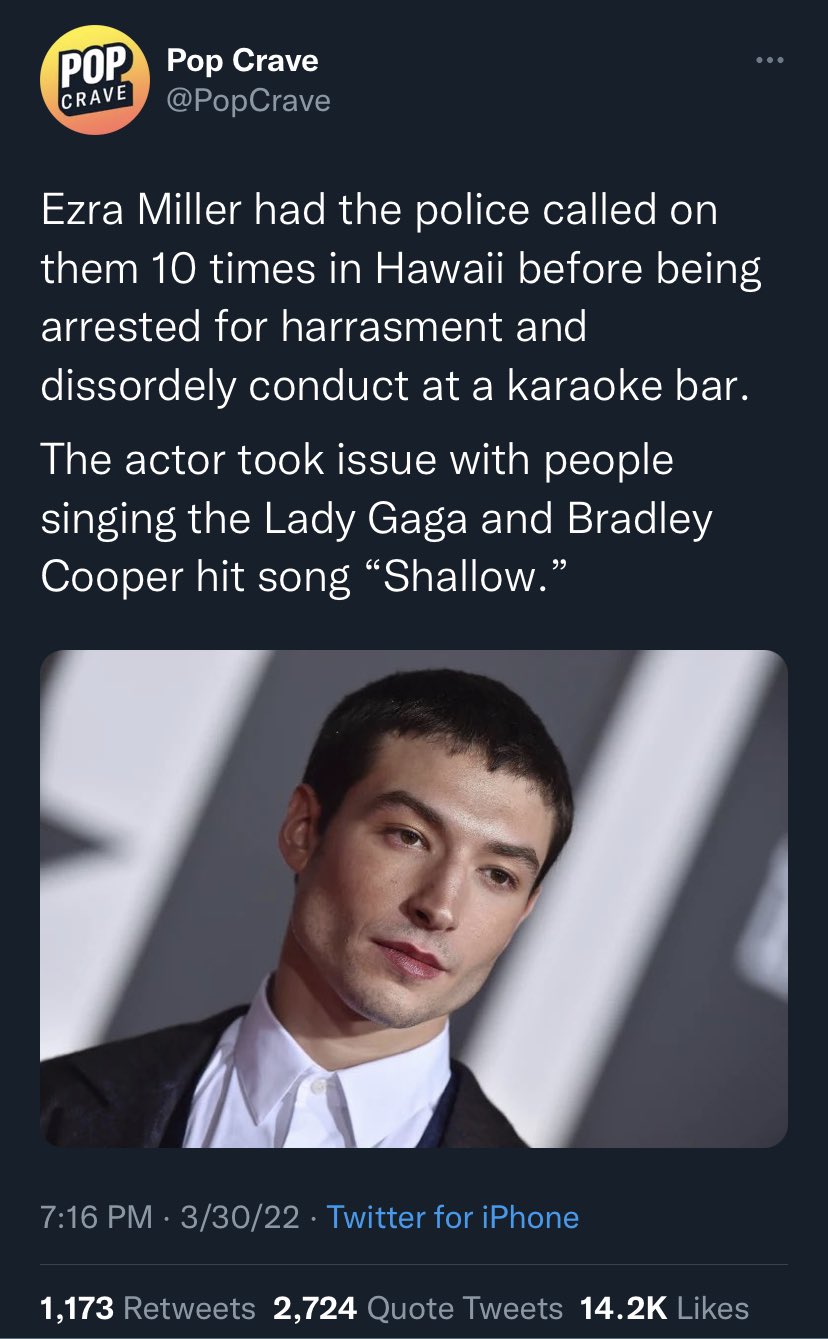 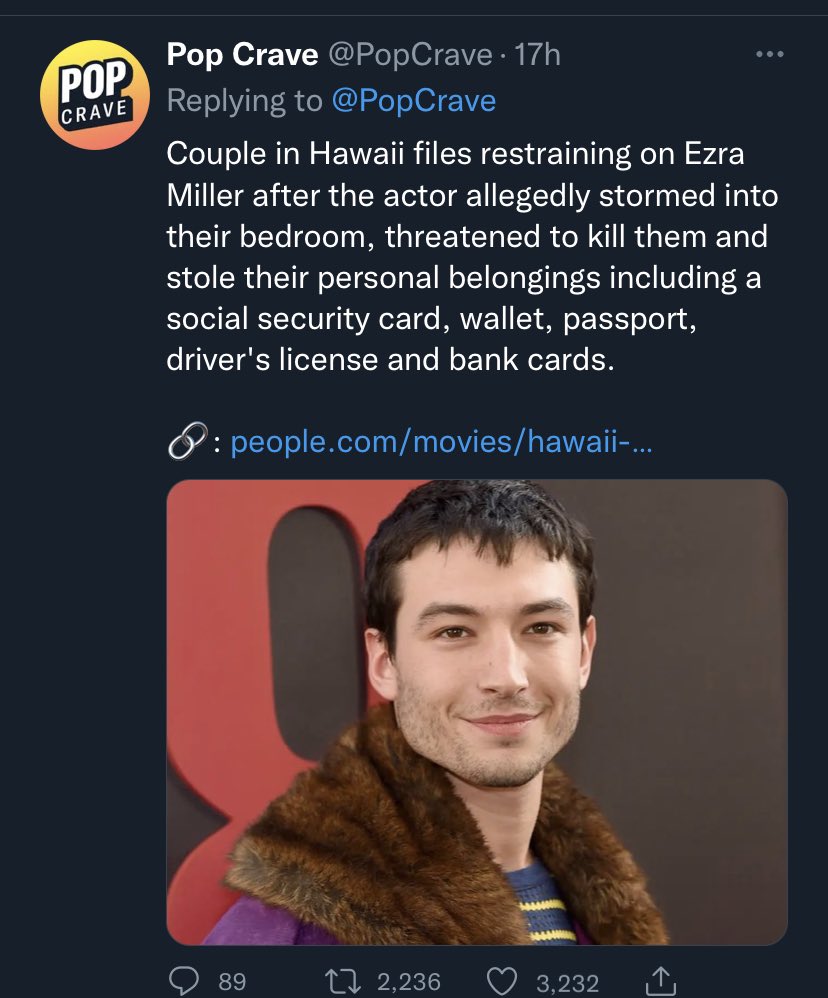 Basically, they enabled him. That's what happens when you let dipshits like this off with a slap on the wrist. It wasn't that long ago that Ezra Miller choked and threw a woman to the ground, yet amazingly he still has a job. How much you want to bet they'll continue to say/do nothing like they did Scamber Turd?