No, it wasn't proven, the judge already had his mind made up going in. He has ties to AH's lawyers and a son who works for the publication. Rumor has it his wife even attended a dinner in her name. No wonder he ignored so much evidence exonerating JD, including police, saying AH's friends were more credible than fucking people who's duty is to protect the public, he literally said this. Not that it matters, anyway because we now have police bodycam proving she lied about the apartment "assault", not that we needed it. Seriously, it merely confirmed what we already knew from all the widely-publicized and easy-to-find facts.

Even fucking body language experts see through her obvious bullshit:

"I'm gonna eat and smirk while talking about my "abuse story" and hearing my "abuser"'s voice"-said no DV victim ever.

It proves not only is she an abusive liar, but a terrible actress as well, oh wait, we kinda already knew that from the few movies we've seen her in. She's such an irrelevant no-name face actress, nobody would even know who she was or care to know if it wasn't for her physically abusing JD, then pretending to be the victim and falsely accusing him of HER abuse she admittingly ON TAPE dished out at him. She's pretty good here, though, because she's playing herself.

AH is the real piece of trash... actually, no, that would be an insult to garbage. 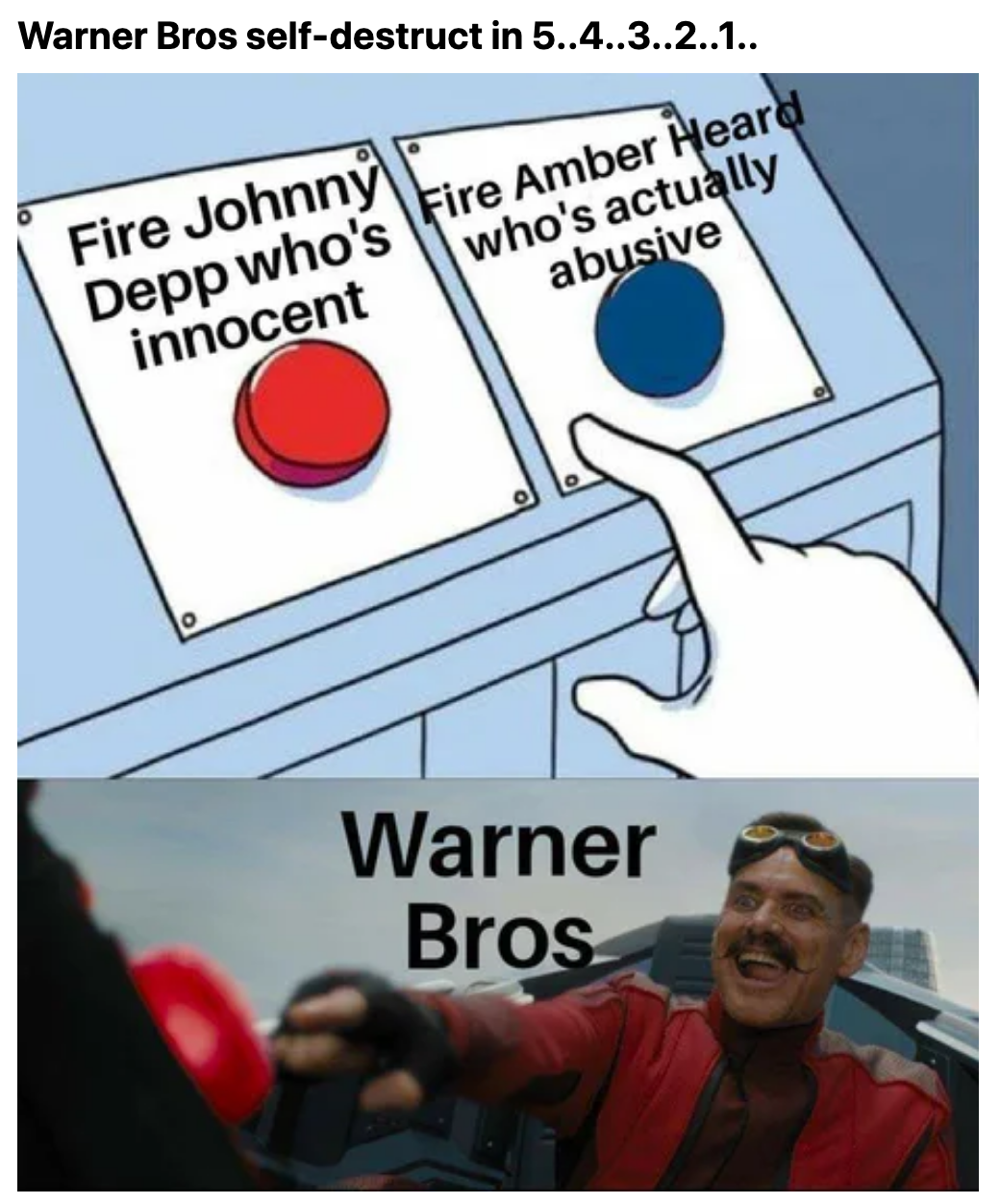 WB are fucking morons of the highest order. "We'll fire JD to act like we care about DV... while letting Ezra Miller and Amber Heard keep their jobs." 🤦‍♂️

This is how you spot a troll. Amber Heard hired a private investigator to dig up dirt on Johnny Depp and it backfired because he could not find anything. He literally became an asset for Depp by default. Amber lies and throws people under bus in attempt to avoid blame. She tried suing the police and that backfired too. They released body cam footage that ended showing she lied about Depp wrecking their residence. There was no damage at all when they showed up. She tried to call the police officer that arrested her for domestic violence against her girlfriend a homophobe. The police officer is a lesbian. She tried to blame her assistant for her illegally bring her dogs into Australia. Assistant had correspondence showing that wasn't the case.

How long can Amber Turd keep getting away with this smear campaign? -_-

At least until April 2022, when Johnny's lawsuit against her is set. If there is any justice at all in this world, he will win, he has far more evidence in his favor than she does.

But at this point I'm skeptical if Hollywoke will take him off their blacklist even if he wins, and I'm positive they won't blacklist her if he wins.

You have the same problem with Kesha, a pop “artist” who has every meaningful battle in court, caught lying repeatedly by the court, yet she gets a career and her opponent remains blacklisted. Smh.

Dr. Luke is hardly blacklisted. He still issuing numerous hits from Juice World, Doja Cat, Dababy, etc. After all he still a producer his image don't need to be promoted or marketed and I doubt anyone who don't follow music industry closely is even aware of his existence even after the lawsuits

This has become such a double standard against men. -_-

You mean he’s hardly whitelisted, he had to hide using alternative nicknames until very recently. Compare where he was before the kesha fiasco to where he is now. Entire careers were built on his productions, including Kesha’s. They guy’s career is nowhere what it used to be, and he was absent for years because he couldn’t work with anyone.

If anything the artists who used him as producer were the ones who fell. The only artists he really built from my memory are Kesha and Katy Perry and neither can exactly exactly described as successful anymore, Katy Perry is millionaire so nothing to really be concerned, but overall the singers who used to collaborate with Dr. Luke are more likely to be hurt by association than the guy himself

That's because performers are famous and, unlike producers, they are the ones who need to keep some image and the image women is supposed to display is to support other women, even if this is costing them potential hits.

But him... he's doing alright. Him using nicknames was at best troublesome, but it's not like he was being blocked to work, and he still issued hits under his nicknames. As long he keep releasing hits no label will really block him. I realized he's really missing household names in their production list as is working more with new singers, rapers and less famous artists, but the key point is as long his songs still making a splash the money is all the same.