I get what you're saying. Could it be people are way overhyping expectations as well? Because I have been playing through the remaster and i'm not seeing anything done better. While we are talking, can you point out some flaws you cam across?

Thanks for understanding. It's possible, given how well received the first game was, that people were expecting something as big or bigger. I think ND delivered on certain aspects like gameplay and graphics, but might have made some mistakes on story which was the strong suit of the first game. And when it comes to story, it is the most difficult to point out since immersion and believability will also depend from person to person. Hence why the game succeeded with certain buyers on some levels, and faltered on others or other gamers.

I personally was not able to purchase a console this gen due to limited funds and so was not able to enjoy the game and its incredible realism. Therefore, my understanding on the story's flaws are limited. I went through many online reviews (video and articles), and went through many segments of the game on youtube to form an idea. There are a few pointed out in this thread, and I could go and find those I read and watched, though it would take me a bit of time. If you would like that, I'll go find them all.

But the best way to understand what might be lacking in the story is to check out some reviews yourself, maybe it will help you understand some of the criticism, and if you care about the community and industry in general, and since you already beat the game, I think it will be worth your time. If you want to check them out and want me to suggest some, I'll be happy to post them for you. It's better that you go there because these professionals will explain the issues much better than I ever can, and it will be better to help you understand the other side (including your SO!). All are gamers who thoroughly played the game and gave their most honest take, it was clear in their analysis. I watched many reviews (some just about the story), some were positive about it, some were negative, so best to watch both takes.

Are reviews wrong if they don’t think the story is lacking, while those finding flaws in it are right?

Personally, I think a lot of people see something they don’t like, like the early game spoiler, and call it a flaw, because they didn’t want that to happen. There’s a difference between something you may not like and an inherent flaw.

Agree. Maybe because I'm older but I prefer more "journalistic" style reviews like the one Skillup did. Angry Joe and Jimquisition is not exactly for my taste, but I agree with most of what he said in the reviews. Maybe they were pissed off due to all the jokes with Abby or his sketches dressed as a woman, maybe this is offensive somehow.

The problem with resetera is that since most of the journalists and developers follow the same line of politics opinion, at the end of the day it is a relevant place to discuss games and news.

I have fucking threatened NO ONE's life and have nothing to apologize to you for in that regard! Why do you feel like I owe you a concession or something here? Because I appreciated the game? Seriously? Like I owe you an apology for liking The Last of Us Part II?

You're just blanketly associating me and everyone who says anything good about TLOU2 with the board policies of the ResetEra forums and every word that Neil Druckmann has ever uttered before and so on and so on. Has it ever occurred to you that there might be a difference? That I might be my own person? Can you not see that you're treating me the same way you CLAIM I'm treating you: in this cartoonish, pigeonholing way?

Yeah, maybe I get touchy about the way many detractors discuss the game because this one, for a great many personal reasons, means more to me than any other AAA release in like decades. Sorry if it feels like I'm going overboard hence, but I'm not trying to bar you from finding fault with it or whatever. I feel like not remarking further on this game myself would be best because clearly I'm not supposed to like this game.

If people here cannot condemn the threat of physical violence against this game's developers without qualification, without becoming defensive and demanding an apology from everyone who appreciates the game they have made, I don't know what there is left to talk about.

@bold. I have really no clue what you're referring to. I would never infer that at all.

I think that you did however minimize the issue on the other side, though it's also nothing I'm jumping at your throat about, and if it sounded like that it wasn't my intention: "The game's detractors certainly have managed to find a way of turning themselves into the real victims here." It's a sentence I found issue with, and I just tried to show the two sides of the story, because I've seen users here and elsewhere being treated badly due to having a simple opinion on the game.

For the record, I didn't associate you to anyone, I think you misunderstood my post. I was just showing how the whole situation, when you put it all together, it does show that there are victims on all sides, to varying degrees of course. I was trying to explain why I disagreed with your statement, I was not trying to show why you in particular were making victims. On the contrary I think your attitude (other than maybe ignoring that some users are being bothered), was actually not a problem at all. My aim was to show that it's best to just look at it from both sides and meet in the middle. If you have the energy, read over my posts again to confirm that that's what I meant, because I never meant to say that you were a source of the bad energy, and I don't intend to point any fingers, I just want to explain why I disagreed with your statement, and tried to help people see both sides.

Just to set the record straight, I never pigeonholed you, since neither of the two accusations you thought I pointed at you were true. I pointed rather at the situation in general, not at you. I was trying to help you see the other side, and why there is an issue as to how people on the other side of the argument are, generally (not by you), being treated.

You should like the game if you like the game, by all means. My posts were not about that. My posts were there to ask that there is respect for those who had an issue with the game, and that the witch hunt (by other figures or users) would simply cease and that people would generally take the whole thing a little less seriously. It's important, I understand, but not to the point that we (in general) should hurt each other for it. 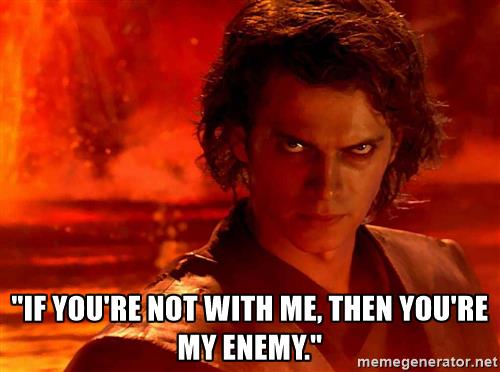 One of the few times the fans of something have actually contributed to me not liking something...

A flaw is generally something people don't like too though. Naturally people don't want contrivances, inconsistencies, nonsensical logic, shallow characters n plots and just bad writing in general in a game series where the writing was the main selling point. No game is perfect so it shouldn't be too hard to believe that TLOU2 is no exception.

Are you seriously saying that TLOU2 fans are bad because they all make broad generalizations about large groups of people?

I get the hypocrisy in that. There's another word I could think of that would be more accurate, but alas sometimes you can't call a spade a spade...