I'm curious, do you think base prices rising will stimulate free to pay, game pass, gaas, and streaming?

This is what happened to the movie market: 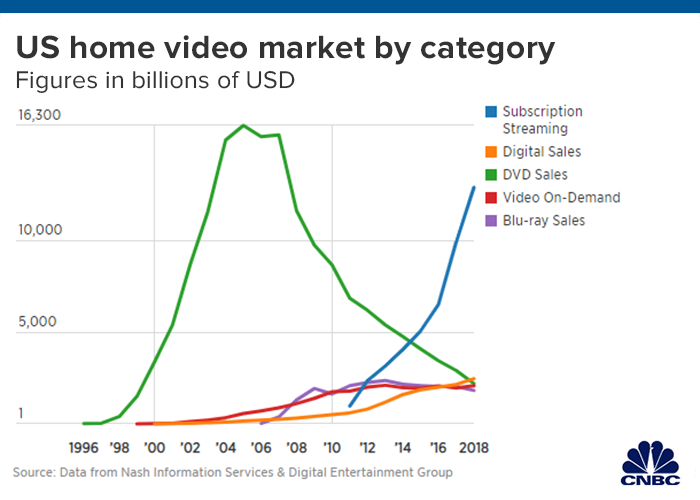 And this is what happened to Trackmania...

Rising prices only drive people away as is evident in this thread alone. The market hasn't been growing much anymore for console games (even slightly shrinking nowadays), while the number of competing releases still seem to go up.

Together with the economic recession, full new game sales might be on the verge to follow DVD sales from '08 down. At least for now the further move to digital puts more money into publisher's pockets making it less of a necessity to raise prices while still putting in the development budgets gamers expect nowadays.

I think we're entering a downward spiral. Increase new game price -> more people wait for sales or getting it through a subscription -> Overall revenue keeps going down -> Increase game prices.

On the other hand, Tlou2 set records at the full price.

I don't mind a little price hike as I don't tend to buy many new games at release. I bought maybe 7 - 8 games at full price this whole generation with the rest of them being discounted/on sale.

Exactly. $49.99 was the standard for most console video games from the NES through the sixth generation. I get that Wii games were still $49.99, but that's because the hardware was far weaker than the other seventh-gen consoles.

And with the replacement cycle of Xbox and PlayStation taking longer than it used to be, it makes sense that we would only go 2 generations with $59.99 as the standard. After all, the Xbox 360 launched about 15 years ago at this point.

I don't like the price going up, but it's inevitable. Ok with it. That’s the cost of inflation and really $10 more is not that bad all things considered. Game development costs are substantially more than they were - but just as long as they keep producing great quality games I can live with this.

Inflation alone makes this unavoidable, im surprised we werent talking about it a couple of months ago when it was a looming event.

I dont know if I care for it, because I dont usually buy games on release date since I dont feel they are worth it - for the most part. I dont feel Trials of Mana was worth the $50 I payed for it and I dont feel the new Shantae game is worth $30, so I wont pay for it. Sometimes price tags take a backseat to value. That said, value is subjective and I can think of a couple of games I will absolutely want on release date and will pay $70 for it if must. So all in all I can quite say this will change they way I decide which games I buy or how many games I buy.

That along with the fact that production budgets have gone up significantly in the last 15 years. If it costs more to make something than its obviously going to cost more to buy it.

1.I'm acknowledging that game development has risen significantly since the PS2 era, my point is that the increased AAA game sales,DLC, and micro-transactions more than makes up for these rising development costs.

2.Modern Warfare 2019 is on pace to become the bestselling game of the series, plus Activison also gets revenue from Micro-transactions in the game.

3.The amount of franchises growing this gen is far exceeding the ones on a decline. Plus even if they're on a decline, they're still more than profitable for these developers. And why in the world does a relatively small budget game Just dance needs a price hike? The game's budget is barely increasing if at all since it doesn't have to deal with creating worlds or environments, using Just Dance's decline is an extremely bad example.

5.Why should it come now if developers are doing more than fine with DLC & Micro-transactions?

UK high street prices usually remove some of that value, Games are meant to be £55 here now (PS3 era it was £50) but most can be got for £45 or lower if you buy physical. The issue comes from online stores where there's no competition. They fix prices really, New games will be £60, no other option. You get the HD only PS5, expect to pay more for games, even though there's no packaging, shipping costs or resale value. :P

First off, the home video market is not directly comparable to the console game market because of how movies are distributed and consumed. Clearly, most people tend to think of movies as "disposable" (for lack of a better word), something to be enjoyed temporarily but not kept around, much like a TV show. They may buy a movie here or there that they really like, but most people probably aren't going to re-watch most films often enough to warrant spending $20 on one (I've probably seen close to 150 films in theaters in the past 10 years, yet of those I only got less than a third on Blu-ray, with most of those being Star Wars and MCU). Even in the heydays of VHS and DVD, most films sold only a fraction as well on home video as they did in theaters (usually, it was smash hit action-adventure films and animated family films that did exceptionally well). Also, back in the day renting was a lot costlier and more of a hassle than it is now, and waiting to catch a movie on TV meant having to work around the network's schedule and finding out when the movie comes on, so both of those factors likely added an incentive to just buy the movie. Streaming and even Redbox are far more convenient options.

But people that buy a game brand new for $60 on day one are probably the ones who are really looking forward to that game and want to keep playing it in the long term. People still replay old games all the time. Multiplayer titles are replayed constantly. Odds are, when people spend money on a game, it's for a game they want to keep to replay. Video games are an active form of entertainment, not a passive one, and people who buy them are going to invest more of their time into them.

If rising sticker prices drove people away, then nobody would buy anything anymore. The economy would have ground to a halt many decades ago. A Big Mac was 45 cents back in 1967. Now it is $4. In the 1960s a brand new car would set you back maybe $2500-3000. Now they typically cost over $20,000. Based on national averages, the gasoline you put in those cars cost 30 cents per gallon in 1960, but currently it's over $2/gallon. Few people would have spent $4 on a hamburger or $2 for a gallon of gas or $20,000 on a new car sixty years ago. It would have been too expensive. The average household income back then was less than $6000/year. But what was a prohibitively high sticker price back then is absolutely normal now, and will likely be considered dirt cheap by mid century. Nominal prices increase, but so do nominal incomes. Everything more or less scales over time.

But people are cognizant of inflation in shorter time frames as well. Sure, sometimes people may carp and moan about seeing a price tag go up, but they get over it so long as the increase is relatively modest. Everybody is aware that a dollar just doesn't go as far these days, and so it will continue forever. To go back to video games, in the 1990s the software was indeed more expensive. Someone working minimum wage in 1992 would have had to work about 16-½ hours to earn enough to buy a copy of Street Fighter II for the SNES, but now a minimum wage worker only has to work about 8.3 hours (actually, it'd be more hours than that in both cases because of taxes, but for ease of calculation I'm assuming no taxes). And adjusted for inflation, the MW in 1992 was actually about 50 cent more per hour than the current MW. And let's look at hardware. Today, $400 is considered a reasonable launch price for a new console. It certainly didn't hurt the PS4 any. Not so much in 1995 when the Saturn launched at that price. Sega essentially priced itself out of contention (though that wasn't the only problem it faced). And just as $400 isn't prohibitively expensive for a console anymore, $70 for a new game is not too costly by today's standards. Again, a $60 game in 2010 would be about $70 in today's money when you adjust for inflation.

As for the impact of price increases on sales, in 2005, the $60 price point for disc-based games was reintroduced and made the standard upon the release of the 360. That was a 20% increase in sticker price over the $50 price that been the standard for PS2, Xbox, and GameCube games. Some people back then complained about the increase, saying that $50 was already too much and that $60 was just outrageous, but clearly those opinions were in the minority (and the complainers probably just got over it). That $10 price hik had no negative impact on the size of the gaming market. Combined PS3+360 sales in the U.S. were higher than combined PS2+OXbox sales, and many records were broken in regards to software sales both in the U.S. and worldwide. Combined PS4+XBO sales have outpaced combined PS3+360 sales in the U.S. in aligned terms and we have once again seen many absolutely staggering hit titles. Back in the 80s & 90s, 10 million copies sold for an individual game was a rarity, especially if you don't count titles that benefited from being a pack-in title. Now we get at least a couple of games each year selling 10 million copies worldwide, even on just a single platform (since multiplatform titles used to not be the norm). The PS4 so far has 7 games to have sold over 10M, while the Switch has 9. Meanwhile, the NES, SNES, Genesis, PS1, and N64 only had 9 games in total between the five of them to sell over 10M copies.

Going back further, we saw a price hike in the transition from Gen 3 to Gen 4. NES games typically retailed for $35-50. Meanwhile, SNES and Genesis games retailed for $50-70. It didn't hurt the market any.

There is absolutely no reason to assume that software sales will take a hit by being increased from $60 to $70. If anything, the increase in software sales over time better supports the idea that the inflation-adjusted decline in software prices has encouraged greater spending. Just like the increase to $60 in 2005-06, an increase to $70 for next-gen will just be a temporary reversal of a long-term decline and will likely have no measurable impact on the market. Assuming inflation continues at a roughly constant rate, by 2025 $70 will be worth close to what $60 was in 2013.