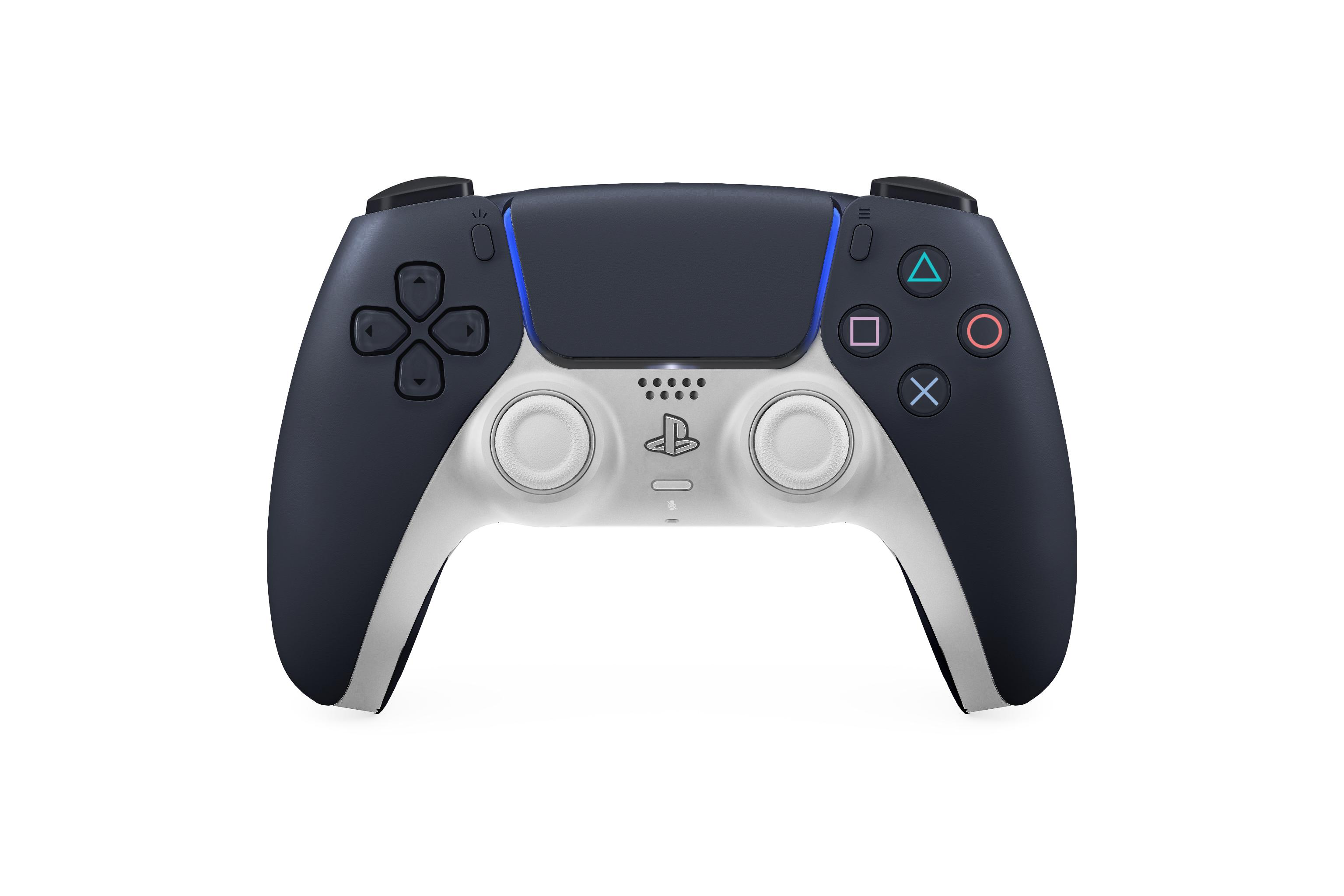 I like this mock up of the two tone better with majority black. It's still not great but more palatable. Black sticks probably would've looked good here too. Plain buttons on the right would have also been better here I think in this case.

I would really like to see a mock up of the official here, but replace the black bottom portion with a similar shade of blue to match the blue LED light. I think that would actually look pretty decent. Maybe the sticks and shoulder buttons should be the same shade of blue as well, but keep the PS logo silver. I've seen some where they replaced the white portion with blue (as well as other colors), but left the bottom black, and I'm still not a fan.

The more I look at this the more I like it. Like many others, I'm not a fan of how it LOOKS (Aesthetically it's kinda ugly and gaudy and faux-futuristic), but as I investigate everything else from the buttons to the triggers to the details on the thumb sticks to the handles...it's clear this is going to be Sony's best controller.

Again, the way it feels and the way it plays really should come before the looks, and as I imagine this thing in my hands, I can't help but feel the comfort of the grips and the texture on my thumbs and the perfect size and shape to play comfortably. all the buttons, the joysticks, the d-pad, and everything else being in the same place relative to the PS4 controller is a bonus, too. Like I said, the Ps4 controller is my favourite (The buttons, triggers, and everything else are nearly perfect for me), so having this basically be the same as the PS4 controller but with a more ergonomic grip and with better thumb stick grips...yeah, I'm down.

It also looks like a lot of the harsh edges and 'sharp' angles are gone. None of them bothered me, but eliminating them really seems to be a good idea.

I saw someone wrote a post with the PS4 and Xbone controller doing a fusion dance and I couldn't be happier to agree to that. kudos.

I hope the console looks just as good. That v-shape from the leaks looks dumb.

Looks like a Xbox controller and DualShock had a baby. I like it, because imitation is the sincerest form of flattery

I'm pretty positive...the point of the noticeably different controller design.... IS TO BE DIFFERENT. These mock ups are trying to make the controller as classic as possible and thus fail immediately; if SONY wanted to be classic they wokd have. The design of the controller doesn't need to go back YOU need to move forward.

After thinking about this for a few hours, I’ve come to this conclusion: I’m kind of disappointed by both the PS5 and Xbox Series controllers.

On the one hand you have Microsoft, who in my opinion played it too safe. It is very much an iterative design, the only noteworthy changes are a smaller overall size (a downgrade imo, as I thought the XB1 controller was the perfect size), a heavier usage of texturing (a downgrade for me as I have sensory processing disorder and don’t like rough textures), the addition of a share button, and a redesigned D-Pad. They didn’t improve their rumble tech and are just reusing the XB1 rumble motors, which is disappointing since Switch and now PS5 are surpassing XB1’s rumble tech.

On the other hand you have Sony, who did the exact opposite, they played it too risky. The PS5 controller is the very definition of a revolutionary design. Almost all traces of the original DualShock 1-3 design language are gone except for symmetric sticks and shape face buttons, with a few elements from the DualShock 4 design language remaining as well. I personally like the new shape and ergonomics, but I hate the two tone color and lack of removable battery.

So the Positives and negatives for each controller:

PS5
+Cool futuristic design
+Improved Ergonomics
+Adaptive Triggers sound great
-Ugly two tone colors
-Even more lighting on the face which will be obnoxious at night
-Non removable battery, which means you need a whole new controller once the battery starts losing max charge
-Share and options buttons are still too small and not raised enough, makes them hard to push.

Seems like a bit too much focus on color pattern, that's the kind of stuff that can change with alternate models and of course compatible 3rd party models.
The design as-is almost has a star wars aesthetic to me (???), which I also thought of the devkit box, so curious what final console design looks like to match...
On the lights, seems like being much smaller than previous lightbar (and facing up rather than forward) will use less battery, and cut screen reflection.
Hard to say on ergonomics until I get hands on one, but it seems a move in right direction. All the "they should be risky and make xbox controller" posts aside,
there's alot more nuance to ergonomics than just symmetric/assymetric sticks, it just isn't reducible to simple sentence fragment analysis, so...
Better rumble and triggers sounds great (LOL @ somebody saying "they look squishy" how can you possibly "see" such a thing from external photo?)

I'm still curious on console architecture, I think how it's strengths can be utilized really hasn't been delved into in favor of generic #s which favor MS design.
I would like to see PS5 numbers reach a bit closer, even if I don't think exact parity is necessary especially with benefits of faster SSD which obviously costs.
Looks like serious recession risk now pushed by COVID, which might hurt sales but Sony could also leverage for better prices from suppliers if market tanks.
Console will last many years, so getting it as strong as possible up front will help it get the most of out of it for entire lifecycle, immediate sales figures aside.