While we're talking about Clinton:

Even if the polls were even more wrong as they were in 2016, Biden would still win the election with his current polling advantage.

Was 2012 really THAT close?
I was in my junior year of high school at the time and the general consensus at school was that Obama was going to get reelected.

For those wondering whether the Hunter Biden story will be as big as the Comey letter... probably not.

I'm judging this by looking at our fair and balanced Friends over at Fox News. I don't think there's any serious doubt that their agenda is to get Trump reelected. If you doubt that, you should be laughed out of this topic, and generally off of the Earth.

So, with that in mind, looking at their website, we don't actually see much about Hunter Biden on their frontpage. There's one story about it on the front page, but it's more focused on Twitter blocking the story then on the story itself. There's a couple of videos but they're again only sort of related to the topic. It's the Whitehouse's response to the story being called disinformation, and Wallace saying he's "suspicious". Out of about 36 videos and stories on their front page, there are about 3 links, and again, the most prominent one is more about Twitter than the story itself.

This seems to indicate that Fox News doesn't think they have a winner on their hands with this story. It's a bit tough to compare since the layout of the site is different, but on November 1st 2016, of the 35 news items on the frontpage, 12 of them related to Hillary Clinton's emails including basically all of the most prominently featured stories.. If one looked at this page, they might not even know who she was running against, as Trump's name is only mentioned once on the site... cause I guess nothing he did was newsworthy?

Point is that if Fox News thought they had something good here, they'd be hammering it like their name was jumpman. The fact that they're not really harping on this seems to show that they don't think they have a winner on their hands.

It sort of was... but also not really.

On a national level it was close. In the electoral college it wasn't.

Even if Romney had retained North Carolina, and won in Ohio, Virginia, and Florida, Obama would have still won the election, albeit by a very narrow margin. In that scenario, Romney still would have had to win in Colorado, where he lost by about 4.7%.

So, the popular vote was somewhat close, but there still wasn't an easy path for Romney to win. Even if Romney had performed 3.8% better in the national, he still probably would not have won the electoral college.

Makes me a little sad.  I like Romney (even if he was kinda rude to me one time when were in line at cafe rio together).  I think he would have been a really good president.  He wasn’t the greatest campaigner though...

Something I found very interesting:

Donald Trump held a rally in Michigan today and he thought he was in Minnesota. Trump recently mistook Matt Gaetz for Rick Gates. Trump used the imaginary word "under-levered" five times in a row. I don't ever want to hear another word about Joe Biden's cognitive abilities again.

I'm tired of people knocking our stable genius of a president. He is perfectly covfefe.

SNLs take on the debate. I was amused. Best part is Maya Rudolph calling out the obvious plant.

Not much going on electionwise. Fox News clearly read my post about them and put in more Hunter Biden stories to make me look bad. So, they are harping on it a little more. Take that for what you will.

In polling news, not much going on. Trafalgar has Trump up by 1 in Michigan. I've spoken about them earlier, so take that for what you will.

In moderately good news for Trump, Yougov has Biden up by 5 in Wisconsin. Which is not a great result, but a bit better than he's been doing.

Harris X has Biden up by 5 in Pennsylvania. Again, this is better than he's been doing, but in this case it's not as good of a result. This is a bit odd, because they have him up by 11 in Michigan, and that's more of a gap than would be expected. They also have it even in Florida.

Last semi good news for Trump is Emmerson has him tied in North Carolina. So, that's... ok news.

The most interesting results are in a couple of very red states. New York Times has Trump up by 6 in Alaska... which is waaaaay closer than that state should be. Other less accurate polls have it even closer. Meanwhile, Times also has Biden up by 8 in South Carolina. Remmington Research, a less accurate pollster, has him up by 6 in Missouri.

These are states that should be blowouts. In states like this, which don't get polled often, it is VERY not surprising for results to fluctuate a lot. I believe a few polls in 2016 showed a competitive race in Alaska. But, there's a lot of polls that are all showing relatively close races in states where Trump should be killing it.

On the flip side, Biden is far outperforming Hillary in states like Virginia, Colorado, Maine, New Hampshire, and New Jersey.

Again, the results can be off in certain states or regions, as we saw in 2016. But in this case we have the polls all showing the same thing, in red states, blue states, and purple states. An error that's happening at roughly the same degree in all states is incredibly unlikely.

I'm actually starting to think Biden is a bit underrated. The swings are obviously going to be larger in more red states because there is simply more ground to lose, but considering how consistent and how big those drops are in states where the methodology probably was not overhauled, compared to states where the methodology was makes me think that polls in the midwest overcorrected based on 2016 and may be underrating Biden. Just my personal guess, but considering the shift nationwide and in the states in general, I think Biden may be underrated enough in Ohio and Texas to pick up wins there, and I'm going to be bold and even say Iowa.

With that in mind, here's my prediction. I'm finally getting comfortable in predicting a big Biden win... which will only make it hurt all the worse if that isn't what happens. 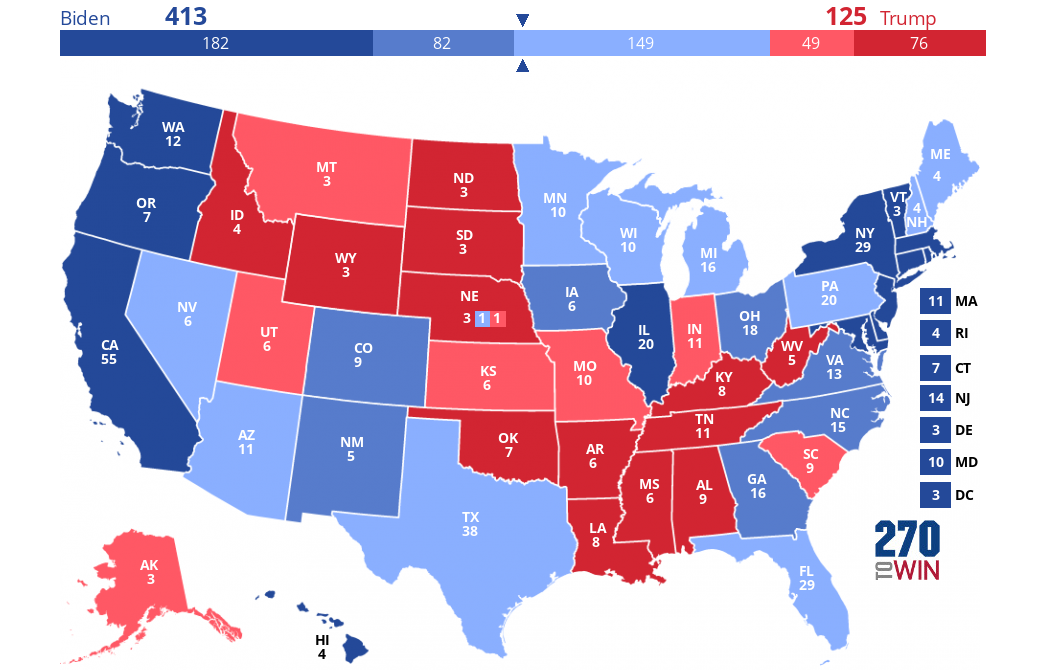