February is normally the coldest month by far, so far it definitely has had the coldest days. But right after that it shot up to the hottest days since November.

We had one day of.. let's call it snow where I live in Germany (near Cologne) during the whole winter. There was a little more snow in the south but not much.
Roughly 10-15 degrees Celsius every day which is way too warm for this time of the year.

Hmmm... I just read a online news paper, after checking this site.
And low and behold, theres a article about this.

Also apparently the last time, this much melt (in antarcitica) happend, was over 100,000 years ago (Eem-periode).
Back then sea levels were 3m higher than now.

It's currently -18c here in Ontario, but it has been extremely mild before the sudden change last night. It went from +1 to -23 after a month of hovering around 0. It won't last, Sunday it will be above 0 again. The warmer average comes with wild swings in temperature and record snowfall in places, plus more flooding in spring. This was 2 years ago in the town 10 km from where I live. 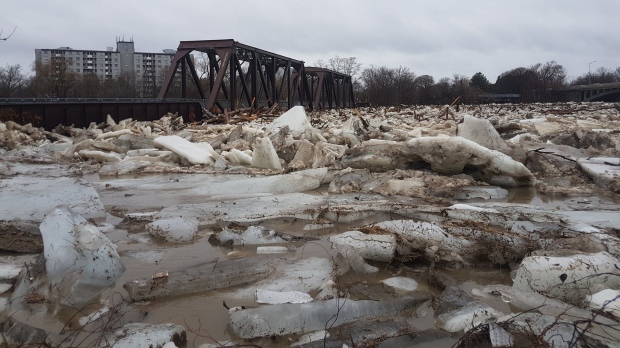 A couple weeks of freezing then a quick melt and you get the 1 in a 100 years event which already happened twice now in a few years... This year there was no big ice jam yet a lot of snow then turning into rain and +10 degrees to cause the river to flood.

It seems a new record is set every few weeks... Newfoundland had to declare a state of emergency and the army was sent in to help dig them out less than a month ago after record snowfall for the area.

14,000 years ago, all of Canada was under mountains of snow.
Whos to say, if we throw the balance of the world out of order, something like that doesnt happend again?

Water covers around 2/3rds of the earths surface.
Large amounts of Heat distribution around the world, are impacted by ocean currents.

If our climate change effects things like the ocean currents (even to small degrees), it could effect such things as how hot or cold certain area's are.
So while europe is getting "hotter" it might be because less heat, is being moved to area's such as canada, which would then get colder.

Which might be a good thing, instead of all the snow/ice of say greenland just melting and riseing sea levels.
Maybe some of it can "build up" in canada, that way we dont just all drown, due to sea level rises :p

For that the snow needs to stay though. However the great lakes have been at record high water levels the last few years. More rain / snow, higher water levels, so yep we're doing our part to slow down sea levels rising :)

Some snow-like dust that never settled has been seen, but it has been largely like autumn. Further north is a different story, they had snow records in one mountain region. Back home where my family lives, it's unstable, they get one foot of snow in a day, then heavy rains and several degrees on the red side. I spent about three weeks there over the holidays, there were all kinds of weather, but no real cold (-25 degrees celsius is not uncommon in January).

To me, it seems like regional differences within the countries (Norway and Sweden) have increased, more so than an actual average domestic overall change.

As for heating; it's free here in Stockholm since they use water-based heat! Woefully inefficient when the real cold sets in though.

I used to believe in global warming. It was clear that the temperature was rising all the way to early August. But then something happened and it has clearly been falling every single month since then, thus disproving science bitches. Sometimes science is a liar!

House Stark, one of the Great Houses of Westeros has this really fitting Motto.

Besides, the leftist media is more bonkers than a cowboy hip-ya-doodlin a sheep on Friday with a bottle of moonshine! They on the left all support gender change, but climate change is out of the question? Hypocrisy!