From a technology standpoint the Wii obviously wins and the games are more refined/better graphics. From a nostalgic standpoint, its not even close the N64 wins. Riding my bike over to Toys R US multiple days to either play or watch someone play Mario running around in 3d for the first time will never be passed, that wow factor feeling as games get incrementally better will never be there again. N64 made the analog stick standard in modern systems, introduced the rumble pack in Star Fox, had RareWare at the top of their game with countless great games. The 4 controllers we're incredible and playing Golden Eye for hundreds of hours with friends at that time is a memory the current shooters just do not grip me the same. Playing fun sports games like NBA Hangtime, and Wayne Gretzky hockey with 3 other friends was an an awesome time and beat the few times me an my friends played Wii bowling together (which was fun) No Nintendo systems has beaten the Ocarnia of Time/MM combo yet but the Switch is off to a good start with BOTW. Besides introducing our favorite franchises into 3D with Mario, Zelda, Mario Kart etc, the N64 also introduced some new favorite franchises in Smash Brothers, Mario Party, Animal Crossing. The systems also has one of my favorite forgotten franchises in Wave Race, wow the water graphics blew me away back in the day! One last thing although the Gamecube had the best Mario rpg in Thousand Year Door, Paper Mario on the N64 was right up there and the series hasn't been the same after the GC. I had a lot of fun with the Wii but honestly I enjoyed the Gamecube over the Wii.

The N64 had better 3D platformers and racers, but the Wii had better 2D platformers, party games, more than two RPG's, and better 3rd party support in general. And although there is plenty of bad stuff to say about both consoles' controllers, I think the Wii's has higher peaks for games that use it well, whereas hardly any games use the N64 controller better than, say, a GameCube controllers.

Wii had kind of an amazing librairy when it came to 3rd party gems or even 1st party with the inclusion of RPG's which the N64 serverly lacked ... also it has tons of Light Gun shooters.

The Wii by a mile. The N64 made me turn my back on Nintendo for at least a decade. The Wii brought me back. It's not even close. The Wii destroys the N64.

Wii all night and N64 every day.

I'll have to go with the Wii, but not by much.

The former is not a "fact" and the latter "proves" no such thing.

The Wii lasted for a normal Nintendo console lifespan. It is no more a "fad" than any other system that lasted 5-6 years. The idea that "people quickly got tired of motion controls" is not supported by the evidence either. We are more than 12 years passed the release of the Wii now and motion controls are alive and well and here to stay. If they were a fad they'd be long gone by now, yet they are featuring in basically every major Switch game. 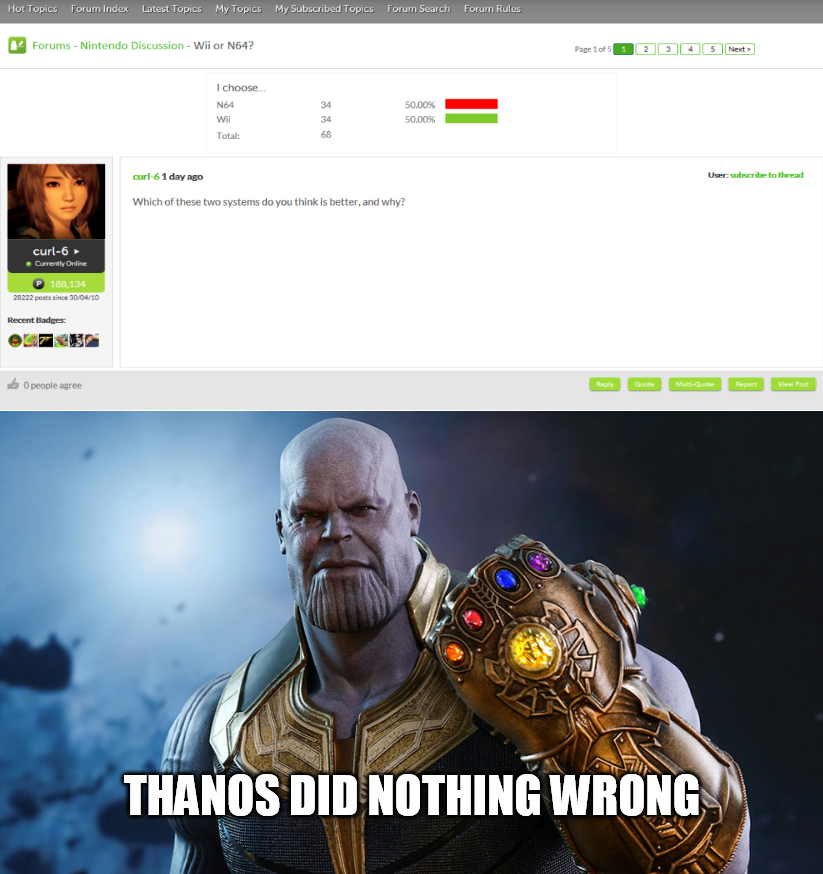