Forums - Gaming Discussion - Is the market ready for a $500 console yet?

There are a lot of people I've talked to who said "I really want a Switch, but $300 is too much." These are also the people who waited until the PS4 was $250 before they got one. The higher the price gets, the more of these people there are. $500 is probably too high for the base SKU. It would need to have some notable extra features to push people into buying it.

I would pay whatever.

It's just fine for the launch/launch window period. Specially' for launch day when all the freaks come out to sleep on the sidewalk and roll around in filth in order to secure their console at 8am. Add in the strong brand of PS, and you've got yourself a $500 USD winner.

How come my argument (which is said by many here) is weaker than saying "people are willing to pay more because of the inflation" ? Who the hell gives a bread about the inflation when they go shopping ?

When they are shopping for bread, they also are confronted with higher prices due to inflation: 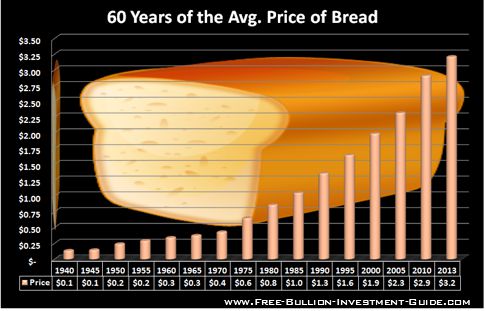 The problem is, that we have a very gradual increase in price here, something we didn't have for Video games. Nobody seems to want to exceed the 60$ pricetag for a new game. And the 600$ is considered a similar mark. But the way hardware goes, that one will have to fall some day.

Inflation is also a bad parameter when you have other things that go against it. If you exclude Tetris and Mario, what games even made it past the 1 million mark before the turn of the century? During the 6th and 7th generation, especially with PS2 and Wii, video gaming exploded in numbers, more than offsetting the inflation with sheer sales numbers. Nowadays, A game selling less than 1M is a huge disappointment unless it's an indie title, but 20 years ago, selling over 100k was already a big success.

You also have to consider that publishers at the time released up to 30 games a year to have something for every quarter; now with the microtransactions, DLC, and so on, they got those covered with a stable baseline and release half a dozen a year at best, which also cuts down on development costs. They don't have to raise the prices with their in-game sales, further cementing the notion of fixed pricing in the videogame scene.

I would not mind a more expensive launch with high specs. But if you tell me I would pay $600 like ps3 to get the best, but 3-4 years later I need another $600 for a mid gen upgrade, then I would be pissed. So companys choose one. Cheap launches with mid gen refreshes or single per gen but expensive at launch.

Not even after the gluten scare and people realizing that carbs are bad?

Time is money. If you dont have the money, wait till price drops or buy it used.

Thats what i do... sometimes.

Gamers are the wieniest whiners. I woudlnt draw conclussions because of a forum minority. The market has changed in the last 15 years. Smartphones sales are rather proof to this than anything else.

XB360 premium launch version was actually priced $400, while the core version, while cheaper, was too poorly equipped, anybody wanting to add a HDD, necessary for downloaded games and proprietary, so a lot more expensive than standard HDD, would have ended up spending more than buyin a premium.
PS3 "cheap" model wasn't cheap at all at $500, so people preferred the better equipped one, but sales for PS3 really took off when the revised model, decently equipped and at $400, was launched.
$400 is good, but while nobody will ask for a princely equipment at that price, most will ask at least for a decent one.