Grand Theft Auto 3. I think it's the runaway winner here.

Holy shit, Rockstar really went above and beyond after Vice City (which was stellar by itself). Increased the size of the map by like five times to include 3 full unique cities, and some countryside, too. Many improvements like being able to swim, climb, rotating the camera while in gameplay, etc. Way more stuff to do in general (like getting aa fricking JETPACK).

And it all fit on a PS2 disc, somehow, someway. GOAT game.

Wii Sports I really liked, but Resorts use of the Wii Motion Plus just made it infinitely better. Plus just more sports, more content in general.

Whether it's better than its predecessors is another story (I'd so no), but it was a big change.

Half Life 2 jump from Half Life 1. Almost completely different games yet revolutionized an already revolutionised game.

Just look at that Crowbar detail!! 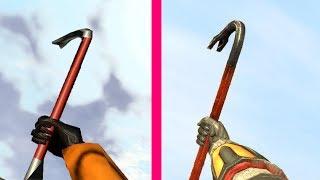 Its about time somebody mentioned it but you forgot to mention one of the most significant chances over the previous games which is the ditching of the tank controls which makes the game much more playable then all the previous games.

- Links Awakening to Zelda: A Link to the Past

But if I had to choose ONE game as the best and clearest example for said topic: it would be...

Silent Hill 4 to P.T.
Konami's demo to their now cancelled game was a f***ing masterpiece.

Street Fighter 2 comes to mind. Probably something like GTA 3 or Metal Gear Solid, though.

I disagree. I didn't mention the controls as they're pretty much the same as the past games. Leon still moves in the same way as before. It was the  change of camera and aiming that made it feel smoother.