i think its just you. sure, it took a bit longer this time around with the 63 characters that you need to unlock, but the difficulty felt around the same. some i was able to KO in under 20 seconds, but others did admittedly put up a fight. however, i was able to unlock all of them, only needing to rematch about 8 - 10 of them.

but you are correct in your assumption - Melee was and still is one of the most precise fighting games ever made, but it done on accident due to low development time. people fell in love with its quick gameplay and broken mechanics, so Brawl was made to slow down and soften the gameplay to make it more accessible to new players. Smash 4 was then meant to fall somewhere in the middle to unite both casual and competitive fans under one roof, but it didnt quite work. so the purpose of Ultimate was meant to truly unite all fans by bringing back all the fighters and fine-tuning the game to work for any play style. so yes, it is geared more towards the competitive crowd, and as a result it can be more difficult.

Now that I think about it, World of Light requires you to unlock all the characters again aside from Kirby. And since the fighters you unlock in World of Light unlock in the base game, but not the other way around, there's actually very little incentive to not just go through WoL. :/

Yeah, I find it kinda hard to open characters. I lost for some. But I like this way. Force me to be better to open everyone.

But smash is not very welcome to newcomers. I see a lot of people playing smash for the first time complaining about they die a lot, not understanding anything.

Smash Ultimate, Moreso than any prior game in the series, is all about introducing newcomers to the basics of fighting games in general. That means Ultimate has more of an emphasis on learning moves, frame-data, spacing, combos etc. So it'll naturally be a bit more challenging to unlock all the characters than in the past, especially since only 8 are available at the start. Ultimate is a beginner's fighting game, much in the same vein as Pocket Rumble and Fantasy Strike, rather than something like Brawl.

This is not a problem for everyone. But the amount of tweets I saw from professional fighting game/Smash players saying the CPU is crazy hard is pretty unusual. Here's an example of an exchange between Justin Wong and Alex Myers. 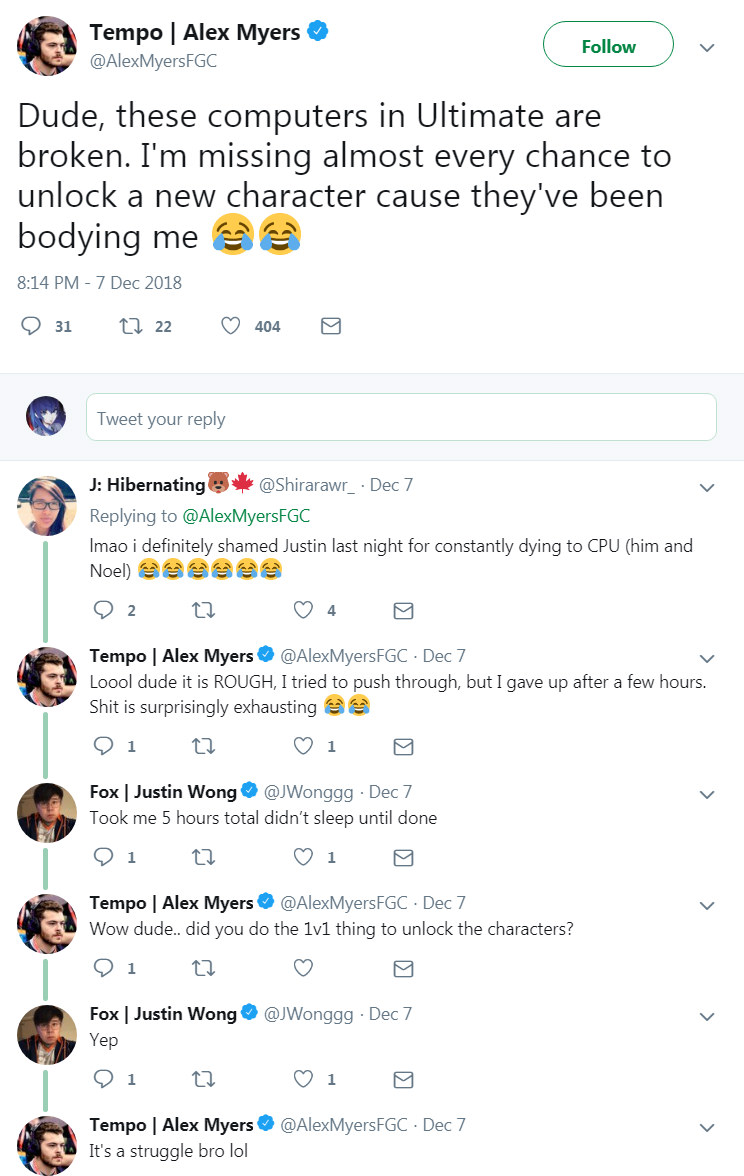 So while I haven't tried it myself yet, and I'm sure everyone has a different experience, I can't recall reactions like this about the CPU before.
No doubt that the sheer amount of characters you have to unlock affects their outlook on this. So I'm a bit discouraged about the unlocking process, hearing this. But hopefully I won't be annoyed by it.

There are videos on YT showing how to unlock them in under 2 hours easily.

WOL gets even more cheesy like the Charizard with permanent fire breathing essentially a permanent item.

In regards to the AI I think they've employed programming that reads inputs similar to older SNK games where the character has a scripted responses to your inputs which is why the cpu fights seem off.

Edit: I'm certain that input reading is employed as to test this when fighting Wolf he always preemptively went to the location of my teleport when edge guarding.

Don't have the game, but seen a lot of videos titled on Youtube stating "unlock all characters in like 90 minutes or something"

I would suggest watching one of those if you want to unlock them all easier/quicker.