This is why I'm of the opinion that Nintendo doesn't actually want "full" third party support. They want enough to be a popular option, of course, but I don't think they'll ever court publishers and developers like their competition. Nintendo is a software company that uses hardware to sell games. Sony and Microsoft use games to sell hardware and related services.

Unfortunately, Nintendo is the only publisher out there who rarely discounts their games. The industry standard is roughly a drop to $40 within 3 months of release, $30 within 6 months, and $20 within a year. But with Nintendo games, it's more like $40 after 2 or 3 years, then no further discounts after that. It's a real shame. The other publishers believe that the increased volume sales thanks to frequent discounts is worth making less profit per sale, and I tend to agree, more volume sales equals more total people experiencing your game, and therefore a maximized number of fans for that IP who will continue to buy games in that IP into the future.

I'd love to buy Pokken Tournament DX when I get my Switch later this year, as well as it's DLC, but 10 months after release it's still $60 new, so I'd have to pay $75 to get the game and it's DLC, which I'm just not willing to pay. I also want to get Zelda once I get a Switch, but of course Zelda is such a massive game that $60 doesn't seem like such an unfair price for it, compared to $60 for Pokken.

Well in terms of physical games, that's not Nintendo's choice. It's the retailer's choice to raise or drop price of their inventory, they're only given a MSRP. For example Mario Odyssey is like 48 bucks on Amazon. In terms of digital, they have discounted one 1st party game to my knowledge... and that was ARMS.

But then there's the business stance, if people are still buying your game at $60, which they are, why drop it to $40? Horizon Zero Dawn is no longer in the top 10, Breath of the Wild still shows up in the top 10 NPD. Why drop the price? It doesn't make much business sense unless you're desperate or nobody is buying your game anymore. Sega was desperate to beat Nintendo, so they did price drops and pack ins of their best software. That helped them get ahead, but not for very long. For Nintendo, I'm sure it makes sense for them to keep a game at a certain price. And eventually, they do Nintendo Selects which drop their top games to 20 bucks.

There's also something to be said about Nintendo's physical game philosophy. They make sure, or at least try to make sure that your game in its entirety is on that disc, or cartridge or game card. And in an environment where that's hard to come by, it's valuable. A lot of other developers fit 25 or 50GB of space on a blu ray and make you download and install the rest. Nintendo's 1st party games do not do that. So you're actually buying a game, a real physical game. And I think that adds value.

And lastly, Nintendo 1st party games are just usually of high quality, and often second to none. So people see value in quality. I remember about 3 years ago, I went into a GameStop and traded in my Wii collection, for reasons, but I digress. I traded in my Wii games and got over $300 cash for them. The cashier made sure to tell me that "The only reason you're getting this much is because the games you traded in are Nintendo games". Word for word, that's what she said to me. And even further back, I remember going to GameStop and trading in old Nintendo 1st party Gameboy games and the manager had to come out and tell my dad that we're trading in valuable and rare games.

They're quality and highly sought after games, and people are still buying them. That's why I think they keep their prices the way they are. If the games start to sell rather poorly, or less than they expect, then I think Nintendo would discount them for sure. Their job is to maximixe profit. I think they'd rather sell 10 people a $60 game than 20 people a $20 game. As far as digital sales, I think Nintendo does need to embrace that more and hopefully they do that with the online deals in September.

Edit: in terms of making sure a game reaches more people, like I've mentioned above, Nintendo does Nintendo selects and even before then, Player's Choice which discounts games.

Yes and that's the problem. The good sales of their exclusives has led them to believe the lie of "we do not need to lower the price of our games" and does not let them see a broader view of things: Lowering the price of their games would not only boost their sales but also the sales of the consoles. Your games are incredible, make them more accessible so that it reaches more people.

I would like to try Fire Emblem Fates, but its price is still crazy, so I won't. I have enough other games to play, it's their lost.

Meanwhile, I bought for 200€ of digital games during the spring sales on PSN (around 8 games), including some games that I won't play for a long time, but it was way cheaper than a full price, so why not? Steam works mostly based on sales too. It's amazing that Nintendo still doesn't understand those things.

Well, imagine if Zelda had a Goty Edition for 40 dollars, this would probably sell forever xD. As I said in my post, despite its price, Nintendo games still sell at an incredible rate. But of course, that's thanks, in large part, to the Nintendo fans. Those who are not so faithful do not usually follow the same trend. They see things in terms of prices. This is not about just selling more or less games, this is about boosting console sales. And you need to convince those who are not your fans, who are the majority. And you convince them with incredible games and being very cheap.

In my case I have never been a fan of Sony, although I have to admit that some of their games interest me. And lately I got the idea of someday buying a PS4 for the cheap of their games.

Adding to Alejo's comment that Overwatch GOTY Edition is $20 on Amazon US, it's the same thing on Amazon UK. 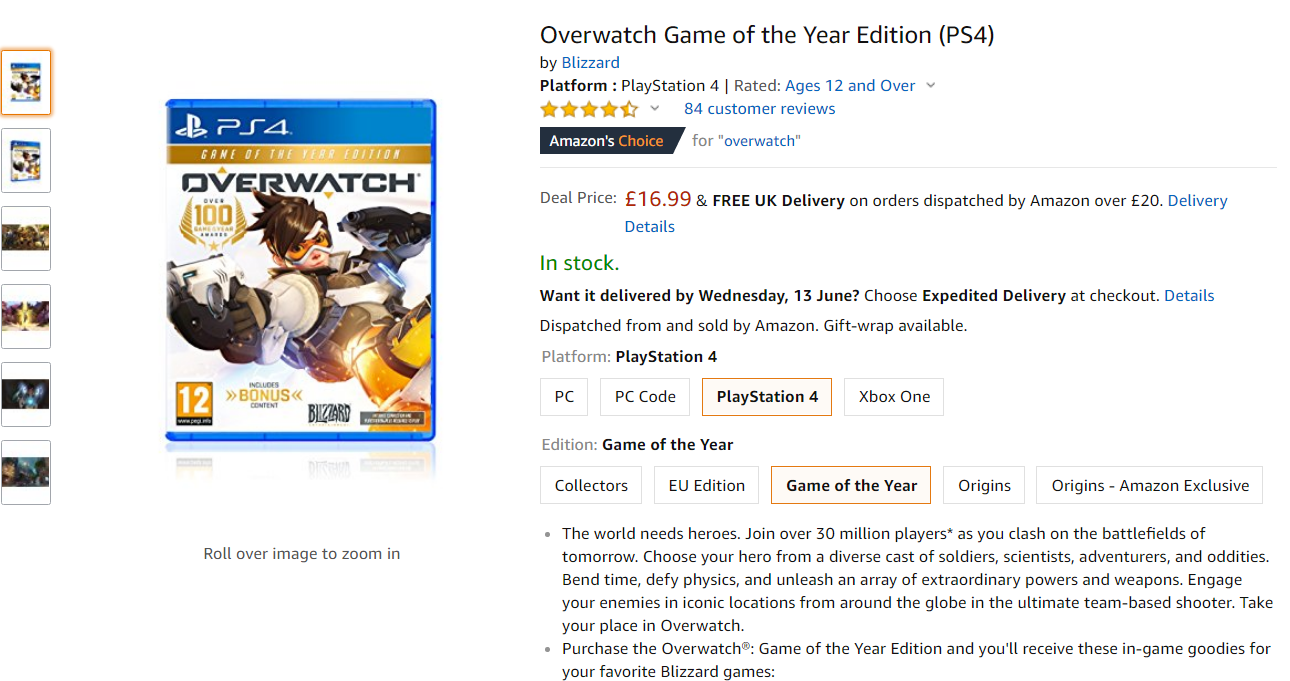 Well, that sounds great in theory but in practice it's trickier than you think. For myself, if something is cheaper than the competition or is cheaper than I would think, I don't buy it. It is like some sort of reverse psychology. I like to pay well for something I feel is quality. But yeah, that's just me.

I find that Nintendo's goal for appealing to a larger crowd isn't by artificially lowering prices, and again, that's the manufacturer's choice. But they rather make gameplay choices (like Pokemon Lets Go) to try and bring in new audiences. Similar to what they've done with Splatoon. When you've got for example, a banker like Kimishima running your company, slashing prices is a last resort, especially if your game is still selling. And Nintendo games are selling better than ever this generation. Zelda has become the best selling entry in the franchise, without a price drop but rather behind a philosophy of high quality games selling hardware.

I hear what you're saying, a Zelda GOTY edition would be great but Zelda is still selling very well. To cut the price so early is literally burning money. I feel that customers who know when they see a good game, will buy if. If it needs to be cheaper for you to buy it, you already probably aren't the most loyal Nintendo customer to begin with or not willing to be a longtime Nintendo consumer.

Nintendo pays a security fee so retailers can't easily slash their prices. Why? I guess because they think that will lead you to not feel punished for buying at launch. But, this also means they will see less sales.
They still sell gangbusters though, so wether it's worth it or not, i don't know.

i completely agree, but at the same time i don’t think nintendo is learning a lesson. they’ve had this practice for decades and currently their games are selling better than they have for a long while despite no change in their game prices.

i think as gamers it’d be in our best interest for the games to be cheaper, but it seems to me that nintendo would rather sell their games for full price to fewer people than at a discount to more people. i guess they believe it’s better for them that way.

don’t get me wrong, i don’t agree with them. i’m just trying to understand why they do what they do.you have to admit that selling 10 million copies of mario at $60 is more impressive than selling half of those copies at $40 or less. and yes, maybe they could sell more copie if they did use a lower price point, but their pricing practice doesn’t necessarily seem to be hurting them much.