Haha, I feel the same way, people say that the Wii U "failed" because it didn't sell as much, I say that a video game machine selling 13 and a half million consoles on basically first party alone, is pretty crazy. Sony nor microsoft would get nowhere close if all they had was first party games. And the fact that they had an 8 million selling, and a few 5 million sellers is pretty crazy.

Everyone, stop what you are doing and look at this. Rol has agreed with something I said. I have taken a sceenshot of this post for posterity.

OT: And thats why I wouldn't dare to make a sales prediction for Switch. Nintendo has a totally new animal here.

I can see people who downloaded Pokémon go, or Mario or seen people talk about them, making an impulse buy on the system.

I like how this was written by Nintendo corporate. 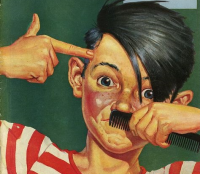 2. Superchunk is a vocal minority. Agree.

3. Agree. 12 people bought the Wii U, no one cares what they think.

4. Agree. Wii U's first year had lots of western multiplats, it helped... not.

5. System sellers they are, indeed. My problem is with the amount of games available to consumers in 2017 though, not just March and April.

8. I expect a continuation of decline in the west in 2017... until the Switch price comes down by a lot, but until then, I can't pit it against the 3DS. It doesn't matter if the switch is better executed than the 3DS at this point, when it's much more expensive and with an annual fee on top.

When will we get the first price cut? What if the Switch perception becomes too tarnished before it reaches an acceptable price point?

9. Current gamers, former gamers, and even the non-gamers. In the end, The addressable market is "gamers".

You are partially correct here. I've abstained from buying (Wii U, 3DS, PS4, PSV, XB1), they suck. It feels like generation 7.5 to many, but to me, that's an insult to generation 7. Most of these consoles took 2 steps forward and 10 steps backwards. I am not a former gamer though. PC (free-online & portability), 3DS and iOS fill my current gaming needs.

So I guess my question is, how do we know the Switch is good for former gamers? It takes a leap of faith to say "yes" with a straight face, in my opinion.

10. I don't care for the price. The market, however, does. The NS won't succeed the 3DS for a while. Nintendo is being greedy here, that's fine when you are in a position to play ball and if you are very confident in your product. Unless we are strictly speaking about Japan, a country that values portability a lot, you shouldn't be confident with that price tag.

You also ignore that paying for online is a very hard pill to swallow for some. One I personally haven't swallowed. Miyazaki's Demon's souls made me buy the dreaded PS3, but his bloodborne couldn't make me buy the PS4 because I refuse to pay for online gaming.

I pretty much assumed that showing off Zelda, a new IP, Splat2n, Fire Emblem, MK8D, Xenoblade, Mario and others, which all are supposed to be released this year, meant that Nintendo really wanted to patch up the mega-droughts experienced with the latest 2 home consoles. Those are all pretty much their biggest franchises, and you get all of them in a single year!

And to be frank, I've never wanted so many games in a single year, games coming from them on a steady stream throughout every quarter. It's quite an exceptional situation that never occured before both on Wii and Wii U. Hell, it may be one of their best summer window ever. It will never be as many as what the PS4 gets, but it's a big step-up in 1st party offering.

And still, they'll make the 90s and the money rain.