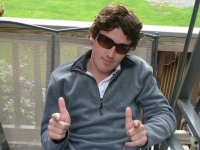 The xbone needs a lil bit of love right now.

Fixed that for you.

I'm not even going to read the rest of the thread.

Who do you see coming out with the most new IP's and having them hit GOTY status? How many ip's have been created under them or in tandem with other companies that have surprised people? Dude...I understand that you like what you like, but if Sony were ever to leave gaming it would be felt hard. There would be a HUGE void in creativity.

Just to clarify, Titanfall isn't exclusive....it is a multiplat not on PS4.

It sells like an exclusive, so I get the confusion.

Ha indeed. Titanfall is game of the damn century!

@Bold That's arguable ... I could easily give this to EA who has bioware which make new top tier IPs like mass effect or this could also easily go to guys like take two interactive who have guys that created red dead redemption.

I could care less about Nintendo right now if that's your thinking but Sony's new IP's aren't any better than the other publishers.

EA is responsible for the waterin down of EA's IP's. The are probably the main reason The older republic turned into an MMO instead of the classic single player style. Mass Effect got gradually less RPG-like once EA got ahold of Bioware. EA just bought Bioware to milk their IP's. If it sells milk it. They have zero creativity. If it isn't straight forward forget about it.

There is a difference between a creative entity and a company that just acts as a publisher. Sony and Nintendo are self publishers, but they are also creative entities. Microsoft and EA are in the same boat. Think about it based on the process of how their games are made.

As for what I think, seriously, stop worrying about it. Its about what is. Without Nintendo or Sony Microsoft would probably lose all the passion in the world and move on. They need creative entities who depend on the industry to compete with them. This is Microsoft at their best, when they are stepping on someone elses toes. If they aren't they kind of slump over and enjoy the fruits of success but little inspiration. EA is the same way as Microsoft, for instance with the NFL Microsoft has paid to be the official brand of the NFL and EA paid the NFL to be the only licensed brand to make their videogames. Why might you ask? They like competition, but not to the point where their competition of lesser means out creates them and out thinks them. They'll pay to snuff them out so the world cannot experience their product and thus lessens the vitality of said genre. 2k Sports would've made Madden a dead entity and they did what they had to survive and yes they could pay for days over 2k's head if they liked, but in this industry money > creativity. This is why the indies are such a big thing now, bring back they hey-day of gaming when it was simple and fun. Guess who had the most problems with them at the start of the gen because of their hang ups?

All companies are guilty of milking their top franchises, otherwise we wouldn't have Gran Turismo 6, Halo 4, and New Super Mario Bros. 2. It's what they do with those games that actually makes them better or the same iteration with every entry. I think Sony takes greater risks in regards to new IPs over the other two companies, even if the games don't become financially successful. They still look like they try (Nintendo does a good job with their existing IPs), instead of releasing the same game over and over, moreorless.

Games published by Sony in 2012-14 that are new IPs include Book of Spells, Playstation All-Stars, Sorcery, Tokyo Jungle, Journey, The Unfinished Swan, Beyond: Two Souls (even if it plays similar to Heavy Rain), Diggs Nightcrawler, The Last of Us, Puppeteer, Rain, Knack and Resogun. Granted, a lot of those aren't exactly high-class titles, but they try to be somewhat original.

Nintendo doesn't invent many new IPs (Wii series was their first one in a good while), but they tend to do pretty well with their established franchises, even if one of them might be a little milked. Microsoft doesn't seem to have a whole lot going for it, as far as original IPs are concerned, as outside of Ryse and Quantum Break, I can't think of any previously announced titles coming to the Xbox One.