Yoshi’s New Island looked technically solid during my recent preview, and the demo I played captured a lot of elements that made the original game a success. I consider Yoshi’s Island on the Super NES one of the greatest 2D platformers of all time for lots of reasons. It carefully balanced a charming platformer with challenging level design and egg tossing mechanics. The Yoshi series of platformers hasn’t produced a follow up quite on par with the exceptional original, but each one has tried to rebottle some of that magic.

The world of Yoshi’s New Island retained the original game’s cute, hand drawn aesthetic. It still looked like a world designed by felt pens and magic markers. The music still had that vibrant toy box-like quality; the developers used simple piano loops and even an occasional kazoo playfully buzzing away in the background. Even the story of Yoshi’s New Island is largely the same as the original, albeit with a slight twist: The stork accidentally delivered Baby Mario and Luigi to the wrong house first before it lost the sibling twins over Egg Island. The villainous Magikoopa named Kamek struck again, and he has rushed away with Baby Luigi in tow.

I played five stages of Yoshi’s New Island at Nintendo. The areas were spread across three worlds of the mysterious Egg Island, and each stage presented a look and feel similar to the original SNES Game. I witnessed playful hills – where the hills had eyes and smiling faces -- a jungle area, and a mountain area that featured some challenging platforming. More importantly, each stage demonstrated some of the smaller features found in Yoshi’s New Island. For example, a small floating pair of binoculars gave me the ability to scan around a stage using the accelerometer. With the ability to see the whole environment, I was able to determine the best shot possible for the Mega Egg – a gigantic egg you’ve probably seen in previous trailers for the game. 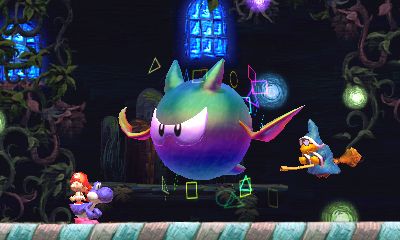 Yoshi’s New Island also included a surprising number of control options. There are two different configurations for jumping and moving, and these options specifically altered placement of the lock-on button. Players can also choose between Hasty, Patient, and Gyrosensor controls to customize how lobbing Yoshi eggs worked. Hasty egg tossing followed the same rules as the original: Holding the R button kept the targeting cursor moving, and once I let it go I fired an egg. On the other hand, the Patient setting required two taps to fire an egg – one to start up the aiming cursor and another to throw. The gyro control system allowed me to tilt a 3DS to line up shots. I was surprised how accurately I could place and fire eggs using this method, and I could definitely see myself trying to work it into the standard stages.

The rules for finishing each level also remained consistent with the original Yoshi’s Island. Hidden in each stage, I was tasked to find 20 red coins, five flowers, and 30 stars in order to achieve 100% completion. I also saw familiar Yoshi transformations during my preview. In specific timed sections of the game, my Yoshi would mutate into a vehicle and I quickly had to navigate my way through an area using the 3DS gyro sensor. I ran through an area dressed up as a Yoshi Kart and I sped through a later space as a helicopter.

Naturally, it’s hard to place any judgment on a game based off of only five stages, but I do have one major concern with Yoshi’s New Island: It’s the first Nintendo game I’ve played in a long time that feels like it was made only for kids. Of course, I understand that a lot of Nintendo games skew towards a younger audience, but a majority of these games maintain a feeling of fun for all ages. Like a good Pixar film, games like Super Mario 3D World or Zelda: A Link Between Worlds work for a wide range of players. In Yoshi’s New Island, I didn’t feel it was the case at all. The simplicity, the art style, and in most cases, the lack of difficulty made it feel more like “My First Yoshi Game,” an odd outcome since the original Yoshi’s Island managed to balance a cute presentation with challenging gameplay at the same time.

I’m not sure if Nintendo feels Yoshi skews to a younger audience in a manner similar to Barney the dinosaur, but a majority of the presentation felt focused on its adorable aesthetics and less on the type of challenging gameplay I would expect from a Yoshi game. Of course, a lot of the core ideas in Yoshi’s New Island traced back to the SNES original, but none of them felt necessarily improved. In the original Yoshi Island, Yoshi and his enemies animated superbly, and its sprite and scaling effects are some of the best you’ll find in the entire Super NES library. Unfortunately what I saw of Yoshi’s New Island wasn’t at the same quality level.

I didn’t expect Yoshi’s New Island to outdo one of the greatest platformers of all time, but I hoped for it to leave its own impression instead. Yoshi’s Island on the SNES managed an important feat back in 1995: Nintendo made a game that balanced a charming exterior with some of the most challenging platforming the Japanese developer had devised at the time. It’s entirely possible that Yoshi’s New Island can achieve the same feat, but so far it feels like a color by numbers variant of a classic series that been dumbed down and incapable of its own ideas.

Oh it's too kiddy now? Based on 5 stages? Yep, not gonna trust this guy! I'll play it and see for myself. 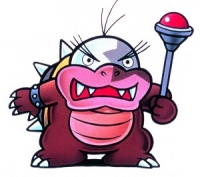 Well at least the original director is working on it, I hope the music is better this time out. I'm okay with more balance, honestly the last Yoshi's Island was so ridiculously hard, literally the hardest game I've played in years.

Not much about this new game has really grabbed me yet, but I'm keeping an open mind towards it and waiting to see how it's received by people.

I don't really remember the original Yoshi's Island being difficult, but it's been a while since I've played it.

It makes sense, Nintendo already has the NSMB, Mario 3D, and DKC series as platformers that cater more to the older Nintendo fanatic, Kirby/Yoshi probably are going to be tailored more to entry level players and kids.

you think the other levels will be different?

That's how it seems for sure.   From what I have read about Tropical Freeze on IGN and Gamespot, they pretty much admitted defeat early on and said they had to use multi-player to get through some of the levels.    I have already planned on skipping New Yoshi's Island for Yoshi's Yarn so it really doesnt bother me.

The only question I have is, does skewing to a younger audience give Nintendo more money? Like OP mentions, movies by Disney or pixar appeal to all ages. And we know these make a lot of money.

Is it sound to tighten the niche when you can make more money broadening?